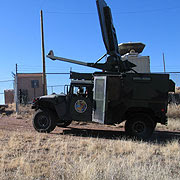 A non-lethal -- but potentially harmful -- crowd control weapon that heats human skin is bound for Iraq, and possibly to a police department near you.

A tough-talking Texan named Edward Hammond has to be a key element of any accurate study of the spooky history of what the military calls the "Active Denial System."

The head of The Sunshine Project, a Texas-based group opposing biological weapons, Hammond shows his disdain for military excesses through swear words and federal disclosure suits that seek to lift a window on military science projects. Two times now, he says, Marine Corp staff handling his Freedom of Information Act claims have mailed him the wrong envelope, mistakenly sending him materials meant for another military office, envelopes that contained classified information.

One of those times, he says, was in May when he received 112 pages of files on the Active Denial System, or ADS, a crowd control weapon built by Raytheon Corporation and slated for military deployment in Iraq in 2006. The documents included descriptions of tests conducted on volunteer subjects at Kirtland Air Force Base in New Mexico. Hammond, who had requested the documents, noticed something odd. "I saw some of the documents that were marked classified should have been redacted," he said in a telephone interview.

The Active Denial System is a Pentagon-funded, $51 million crowd control device that rides atop a Humvee, looks like a TV dish, and shoots energy waves 1/64 of an inch deep into human skin. It dispenses brief but intolerable bursts of pain, sending bad guys fleeing but supposedly leaving no lasting damage. (During a Pentagon press briefing in 2001, this reporter felt a zap from an ADS prototype on his fingertip and can attest to the brief but fleeting sensation that a hot light bulb was pressing against the skin). ADS works outside the range of small arms fire.

After a decade-long development cycle, the ADS is field ready but not free of controversy. Military leaders, as noted in a recent USA Today article, say it will save lives by helping U.S. troops avoid bombs and bullets in urban zones where insurgents mix with civilians. Temporary pain beats bullets and bombs, but Edward Hammond's files have rekindled scientific questions about how the classified system works, what it does to the body and how it will be used in the streets of Basra or Baghdad or, one day, Boston.

As key scientific questions go unanswered, a version of the Active Denial System is being developed by the Justice Department for use by U.S. police departments. The National Institute of Justice, the research arm of the Department of Justice, has issued a half-million dollar grant to Raytheon Corporation for a "Solid-State Active Denial System Demonstration Program," according to the NIJ website. Alan Fischer, a Raytheon spokesperson, said the company is "working on a number of active denial projects, with various ranges. ADS may some day be miniaturized down to a hand-held device that could be carried in a purse or pocket and used for personal protection instead of something like Mace. The potential for this technology is huge."

The DOJ isn't the only one excited. The Department of Energy is experimenting with ADS as a security device that would "deny access" to nuclear facilities.

For most Americans, zapping Iraqi insurgents in Baghdad with a potentially unsafe weapon is one thing; cooking political protestors in Boston or Biloxi will surely be another. Against this backdrop, observers say, Hammond's files become particularly important. "Right now the press really isn't on this," says Hammond. "But that will change when the first videos are released showing this thing being used on people."