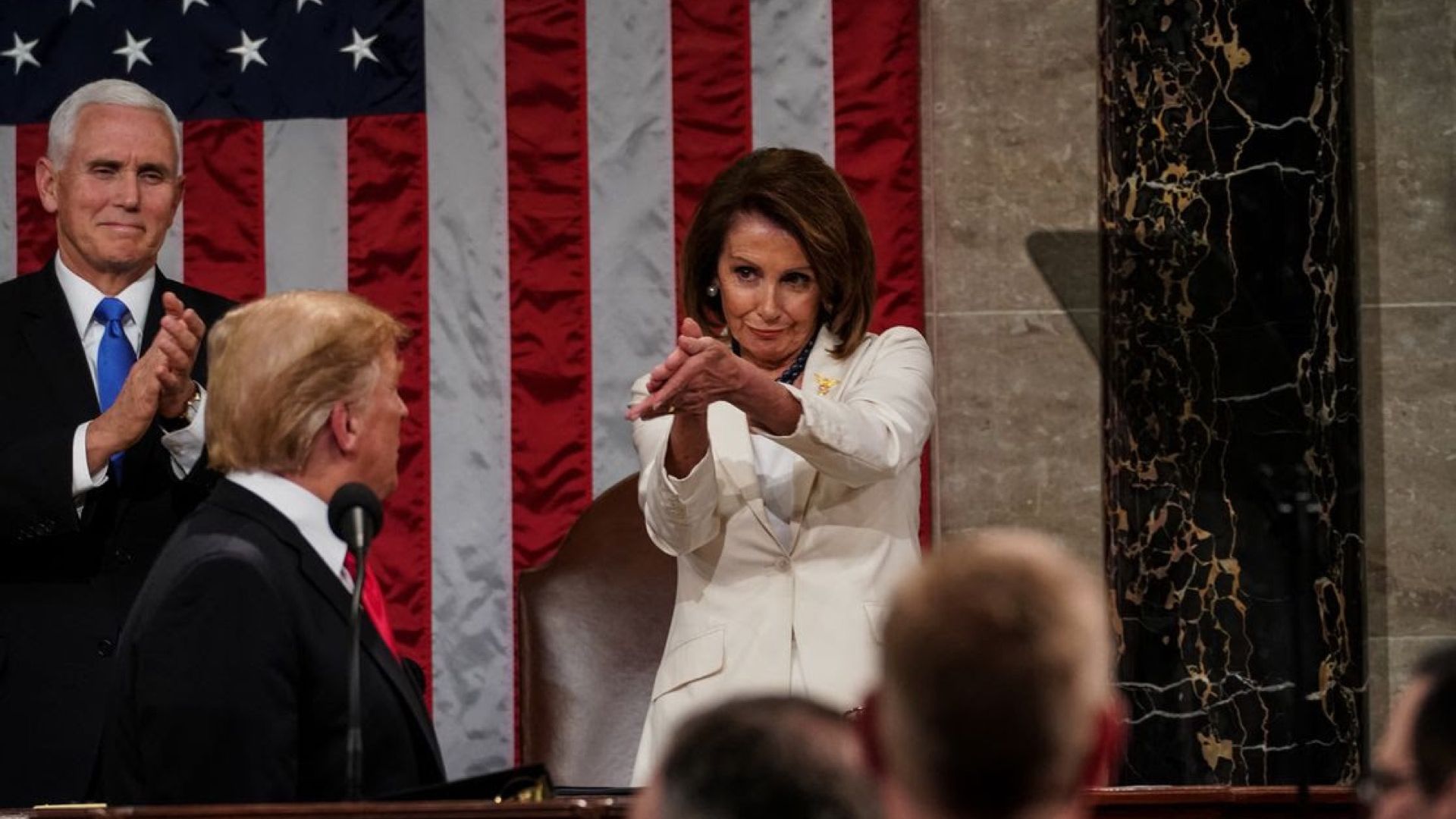 Trump used last night's State of the Union address to lay out themes, policies and symbols for his 2020 re-election race, winning over no Democrats in the chamber but giving new hope to supporters who were turning pessimistic. He softened some edges for his largest audience of the year, but made it clear that he's going to try to re-run many of his 2016 plays in 2020.

A notable new twist that we'll hear a lot more about on the campaign trail: "Tonight, we renew our resolve that America will never be a socialist country."

Jason Miller, a top official in Trump's 2016 campaign, told (Mike Allen of Axios) the president "elevated the wedge issue of 'socialism' in a way nobody else could."

Republicans love the freeze frame of Democrats sitting emotionlessly when Trump railed against late-term abortions. And loved even more the endorsement-by-sitting-and-silence when he hammered socialism.


Many Democrats, not jut the one named Joe Manchin, enthusiastically applauded this line.

So there it is, Donkeys.  By contrast, "Not a Democrat".

Sanders provided viewers with the results of a spate of polls that highlight massive American support for affordable prescription drugs and health care, infrastructure spending that would create jobs, background checks on gun purchases, the legalization of marijuana, a path to citizenship for undocumented immigrants brought to the U.S. as children, more regulation of Wall Street, a significant increase in minimum wage and government-paid college tuition. The Vermont senator goes on to say that the reason that Congress isn’t doing what the “overwhelming majority of Americans” want has “everything to do with the power of the monied interests.”

“Let us bring our people together,” concludes Sanders, “to take on and defeat a ruling class whose greed is destroying our nation. The billionaire class must learn that they cannot have it all. Our government belongs to each and every one of us, not just the few.

“Let us create the kind of America we know we can become.”


Where is the middle ground here?  Who do the compromises favor?

The time is upon us.  Be bold or be sold.

If anybody thinks there's a way to soft-pedal the changes that are long overdue past a president and a party that are going to fear-monger the shit out of them to their ignorant base of voters no matter who is running against them ... better think again.  Even Republicans want someone who will stand up for them against the 1%, as the polls reveal.

Who's going to negotiate that away?  Besides Nancy Pelosi, I mean.

“Here in the United States we are alarmed to hear new calls to accept socialism in our country,” Trump said, clearly referencing (Rep. Alexandria)  Ocasio-Cortez, Sen. Bernie Sanders, and other new Congresspeople who came into office on the back of their support for democratic socialism.

NBC’s anchors asked AOC whether she believed the comment was a dig at her. Rather than answering—she just grinned and calling it a “major coincidence” -- she launched into an explanation of what it is about so-called “socialism” that many people find so appealing.

“The vast, vast majority of Americans believe that you should be able to feed your family on 40 hours a week. We believe that health care is a right, that work should be dignified and we believe that all people should be accepted regardless of their race, gender, or ethnicity,” she said.

She’s right: Medicare for All, raising the minimum wage, taxing the rich... these are all incredibly popular policies. And Republicans, Trump included, are terrified that these ideas will gain so much popularity that they’ll be unable to oppose them. Better call her and her fellow lawmakers scary names before it gets out of hand.

But that’s not going to work either. People are no longer scared of the word “socialism.” In fact, most young people support it over capitalism. The time of Trump and his cronies is coming to a close. And AOC and her colleagues are setting the tone for a new era.