The Texas Progressive Alliance would like to remind you that many people confuse Memorial Day and Veterans Day.  Memorial Day is a day for remembering and honoring military personnel who died in the service of their country, particularly those who died in battle or as a result of wounds sustained in battle.  While those who died are also remembered on November 11 each year, Veterans Day is set aside to thank and honor all those who served honorably in the military, in wartime or peacetime.  In fact, Veterans Day is largely intended to thank living veterans for their service, to acknowledge that their contributions are appreciated, and to underscore the fact that all those who served -- not only those who died -- have sacrificed.

Please also note the correct spelling of Veterans Day, not Veteran's Day or Veterans' Day.  Here's the U.S. Department of Veterans Affairs with the grammar lesson: "Veterans Day does not include an apostrophe but does include an 's' at the end of 'veterans'; it is not a day that 'belongs' to veterans, it is a day for honoring all veterans."

Please: never say 'Happy Memorial Day', or 'Happy long weekend', or any other variant, because if all you're doing is shopping and barbecuing, then you've completely lost the ability to relate to what today is all about.  It's much more offensive, in fact, than saying  'happy holidays' at Christmas.

And let's not forget exactly what they died for, either.  It wasn't just defending our country or 'freedom'.  Especially in the wars and 'domino effect' police actions, declared and otherwise, since World War II.

Off the Kuff has an update on the redistricting situation.

Socratic Gadfly has collected and assembled his first set of thoughts on the idea of guaranteed, universal, or basic income; both its promises and its possible perils.

With hurricane season approaching, Neil at All People Have Value reported on the Trump/Governor Abbott hurricane plan for the Houston/Galveston area. APHV is part of NeilAquino.com.

Democrats were on the comeback trail even before the Montana special election results came in, reported PDiddie at Brains and Eggs.

jobsanger is fearful about the three bullies -- Russia, China, and the US -- who are jockeying to be King of the Rest of the World.

In acknowledging the 2,000 homeless teens living in Denton County, the Lewisville Texan Journal also reports that a non-profit organization has recently opened a new shelter there for them. 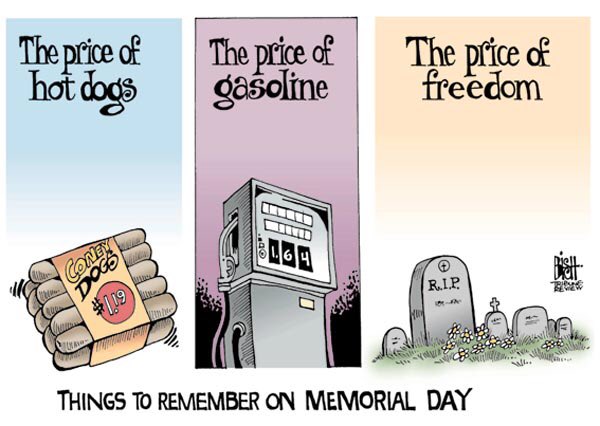 Jeremi Suri writes in Rivard Report that on this Memorial Day, we must better prepare for the next war.

In a plethora of reactions to the Texas Legislature's flurry of bill passages and deaths as Sine Die comes today ...

Better Texas Blog explains the Saturday Night Massacre Texas budget deal approved by the Lege, and dives deeper into the cuts to Medicaid.

The TSTA Blog criticizes Greg Abbott's support of the "sanctuary cities" law, Dwight Silverman explains how you can legally circumvent the new texting-while-driving ban, and Grits for Breakfast adopts the 'glass half full' POV for the law named after Sandra Bland that omits the full telling of her story.

Mark McKinnon wonders how the Texas GOP got to be so out of touch with the business community, and Mimi Swartz was not amused by Greg Abbott's joke about shooting reporters.

And in non-Memorial Day and Texas Lege blogging ...

Somervell County Salon has a few religious news items and notes from the distaff side.

The Rag Blog tells the story of one of Houston's least acclaimed filmmakers, Eagle Pennell, who lost his aspirations and eventually his life at the bottom of a bottle.

Beyond Bones (the blog for Houston's Museum of Natural Science) has a new paleontology exhibit spotlighting the living and deceased -- as in fossilized -- artistry of swimming crinoids, aka feather starfish.

And Harry Hamid reminisces about his first car.
Posted by PDiddie at Monday, May 29, 2017

My newspaper column this last weekend started with what's in your first paragraph.

However, it went on to (politely!) remind people that Memorial Day started about one war in particular, and beyond that, about one side in that one war. It also (politely!) reminded the RWNJs who might have read that far that that "one war" was ultimately about "one thing," as mentioned in Texas' articles of secession.