How LBJ changed the makeup of the two political parties, and more Friday reading

As the 50th anniversary of the civil rights movement ends its commemoration at the LBJ library in Austin, here's a great take on the conflicting legacies of Lyndon Johnson from the Field Negro.

LBJ was a complex fellow, who no doubt, like the Vice President before this current one, did some shaky things to amass wealth, grab power, and gain influence.

Yet still, as president, he presided over our government's effort to take care of the least among us in America. And it was his signature as president on the Civil Rights and Voting Rights Acts. He helped to get those bills passed "against all odds" at a time in this country when it was cool to be a bigot.

"Historian Alan Brinkley has suggested that the most important domestic achievement of the Great Society may have been its success in translating some of the demands of the civil rights movement into law."

This is true. And, to his credit, he knew that the passing of The Civil Rights Act would cause the Democratic Party to lose the Southern white vote forever. And it did.

BTW, if it is true that he actually made this statement: "I'll have those niggers voting Democratic for the next 200 years" (which I honestly think is a wingnut version of an urban legend), it actually worked. Because when white Southerners left and joined the Republican party, black folks knew where they weren't wanted. Equal rights for all was something that should have been easy to embrace, but it wasn't simply because of the history of racism in this country. Now the two political parties reflect the racial divide that still exists.

-- I'm amused that conservatives are reacting badly to the news that Stephen Colbert will take over The Late Show from David Letterman next year.

While many people responded to the news with pleasure and excitement, right-wing talk-radio king Rush Limbaugh was quick to offer his two cents, saying that Colbert’s hiring was a declaration of war on the American “heartland” by CBS.

And as a perusal of the right-wing Twitter community shows, Limbaugh was hardly the only conservative to greet Colbert’s promotion with anger and dismay. Indeed, the sentiment on the right in response to the news can be summarized like so: Stephen Colbert’s being chosen to succeed David Letterman shows that liberal media bias is real. And, also too, Colbert’s not funny, anyway.


Still not getting the joke.  Still the butt of the joke.  Don't you ever change, cons.

-- Kathleen Sebelius, stepping down as HHS secretary, did manage to accomplish some things in her tenure. Putting up with the daily Republican bullshit for the past five years is a star in a crown all by itself.

In the aftermath of the Supreme Court’s 2012 decision invalidating Obamacare’s compulsory Medicaid expansion, most Republican-controlled states refused to extend health care coverage to residents below 133 percent of the poverty line. But Sebelius traveled the country, urging Republican governors to reconsider. As of today, eight GOP-controlled states have approved expansion — in no small part because of the flexibility Sebelius and her team provided.

The flexibility extended beyond Medicaid. Sebelius and her team convinced red states to form partnership health care exchanges in which the federal government and the state would share responsibilities in running the marketplaces. They routinely presented GOP governors with information on all other state models and waivers, assuring them that they could customize reform to their specific state needs. As a result, several Republican-dominated states bucked the national party and chose to run their exchanges either on their own, or in collaboration with HHS.

The solutions became politically tenable to Republican lawmakers because they could claim that they were covering their residents on their own terms, using unique state-tailored solutions that rejected the “one-size-fits all” prescription of Obamacare. Sebelius’ policy flexibility provided conservatives with enough political cover to implement key parts of the law.


She worked her ass off.  Hats off.

-- With all the feuding among the members of KISS leading up to last night's Rock and Roll Hall of Fame induction, the reunion itself was pleasant, even kind.

But absent the performances even in tribute to the masked/unmasked rockers, it was Nirvana that stole the show.

Almost exactly 20 years has passed since Nirvana singer and guitarist Kurt Cobain took his life, and Nirvana bassist Krist Novoselic and drummer Dave Grohl (now the frontman for the Foo Fighters) haven't played Cobain's songs together in all that time.

The band was introduced by (R.E.M.'s Michael) Stipe, who delivered an eloquent speech that addressed the power and historical importance of the band as part of a counterculture that somehow became mainstream. "Nirvana tapped into a voice that was yearning to be heard," he said. "In the '80s and early '90s, the idea of a hopeful, democratic country had practically been dismantled by Iran Contra, by AIDS, by the Reagan, Bush Sr. administrations. With their music and their attitudes, Nirvana blasted through all that with crystalline, nuclear rage and fury. Nirvana were kicking against the system to show a sweet and beautiful, but fed-up fury coupled with howling vulnerability. They spoke truth, and a lot of people listened. They were singular and loud and melodic and deeply original. And that voice… That voice. Kurt, we miss you." 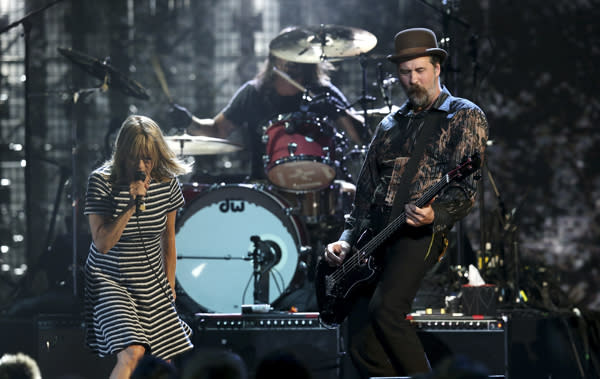 Peter Gabriel, Linda Ronstadt, the E Street Band, Cat Stevens, and Hall & Oates went into the HoF also.  The (hopefully edited) five-hour ceremony will air on HBO on May 31.
Posted by PDiddie at Friday, April 11, 2014

1. He let that "bitch of a war" become what it was in part for fear of appearing weak. But also, as Caro and others document, he personalized Nam. First, his 1961 visit there as Veep put him into paternalistic protection mode. Second, he made it into macho mano-a-mano vs Uncle Ho.

2. If future presidents would only enforce the no discrimination on block grants (George Romney tried, under Nixon), things would be a lot different in more people living side by side in more places.

3. I'd love to see Byron Cranston's LBJ play worked into a movie.

4. I'm waiting for Caro's next volume.

I have done one about LBJ naming RFK as his Veep in 1964: http://socraticgadfly.blogspot.com/2014/02/counterfactual-history-lbj-names-rfk.html

Actually, it was the all-star line-up of Sheryl Crow, Emmy Lou Harris, Carrie Underwood, Glen Frey, Bonnie Raitt and Stevie Nicks who stole the show with their incredible tribute to the Great and woefully underrated Queen of Rock, Linda Ronstadt.