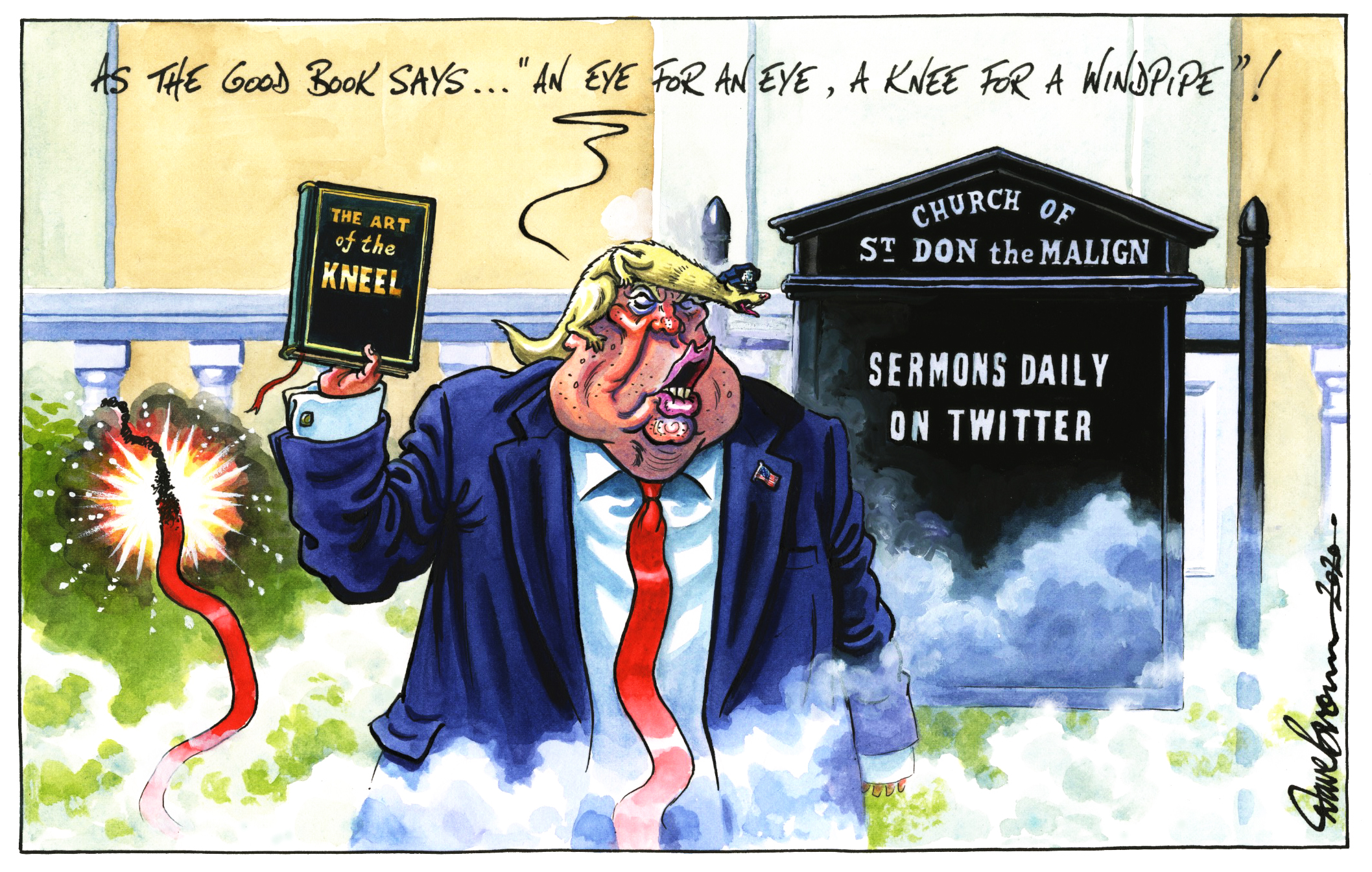 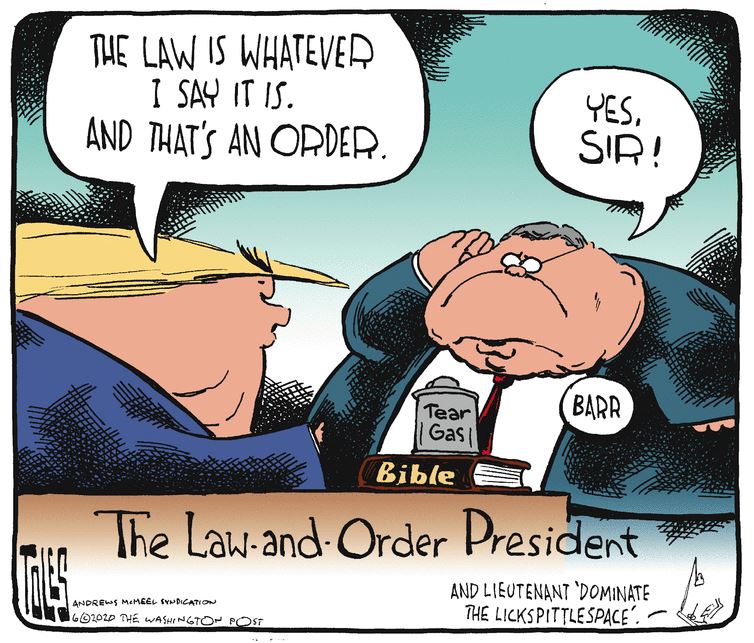 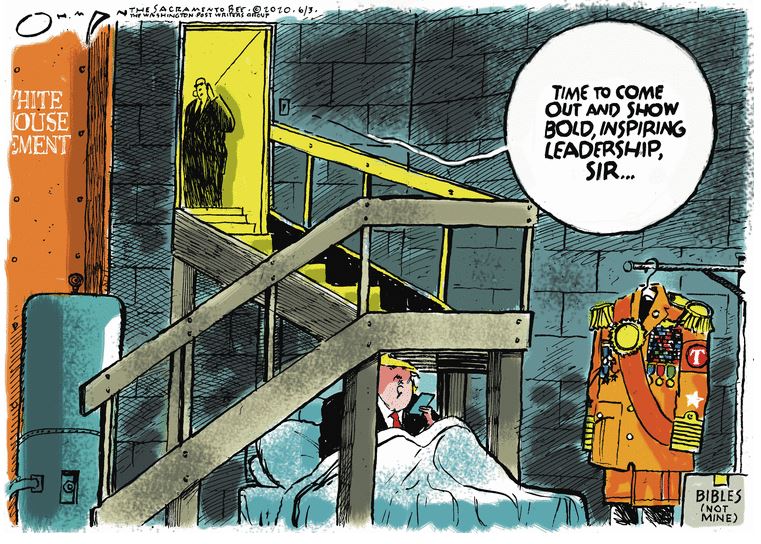 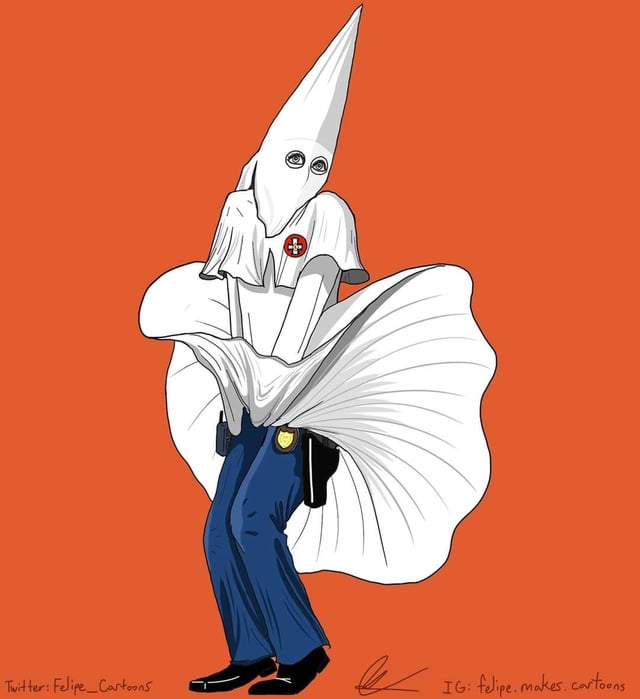 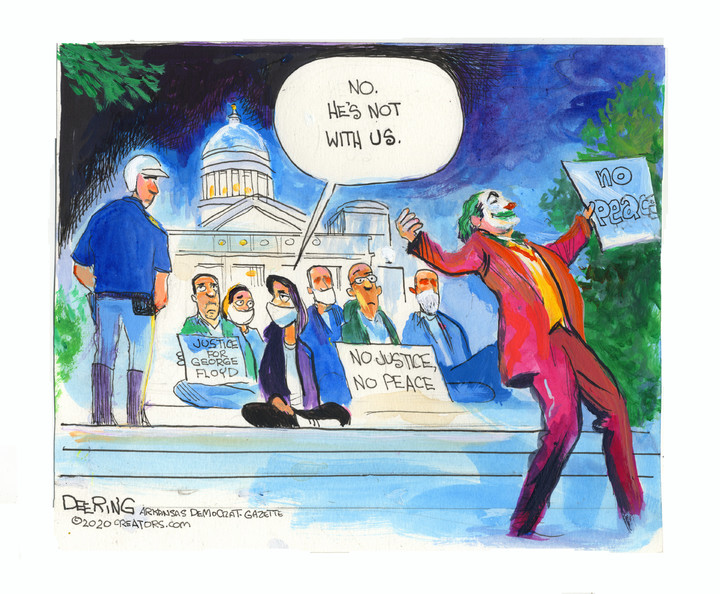 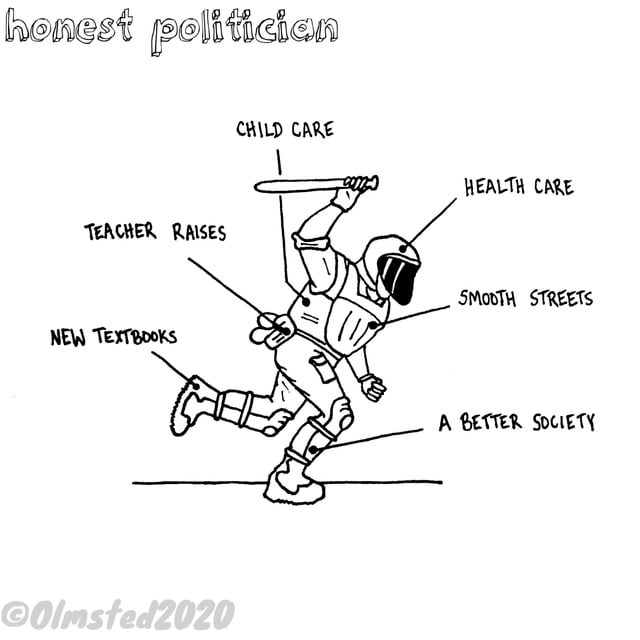 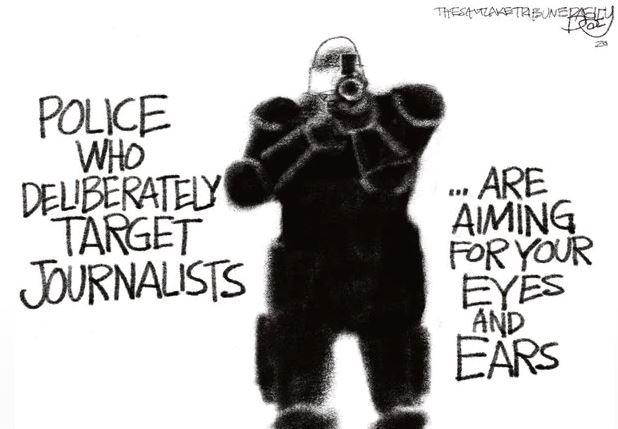 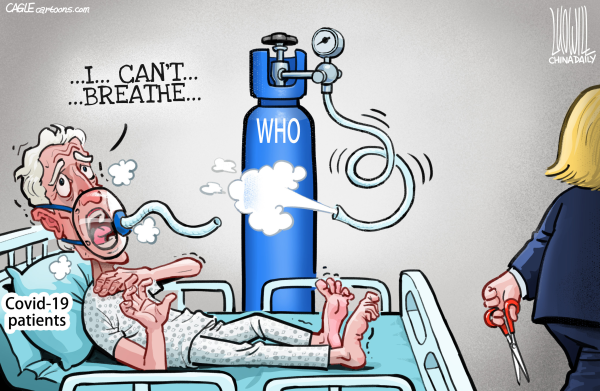 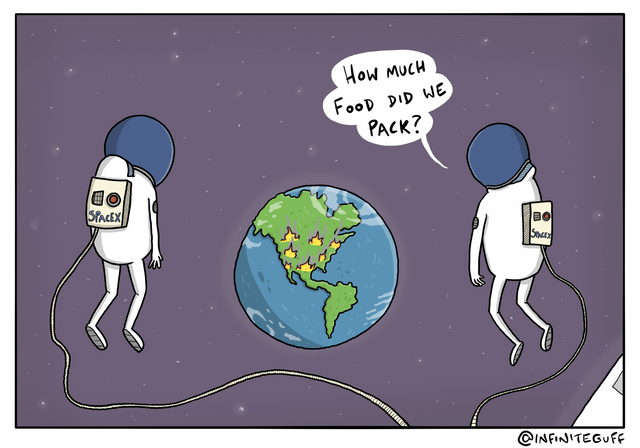 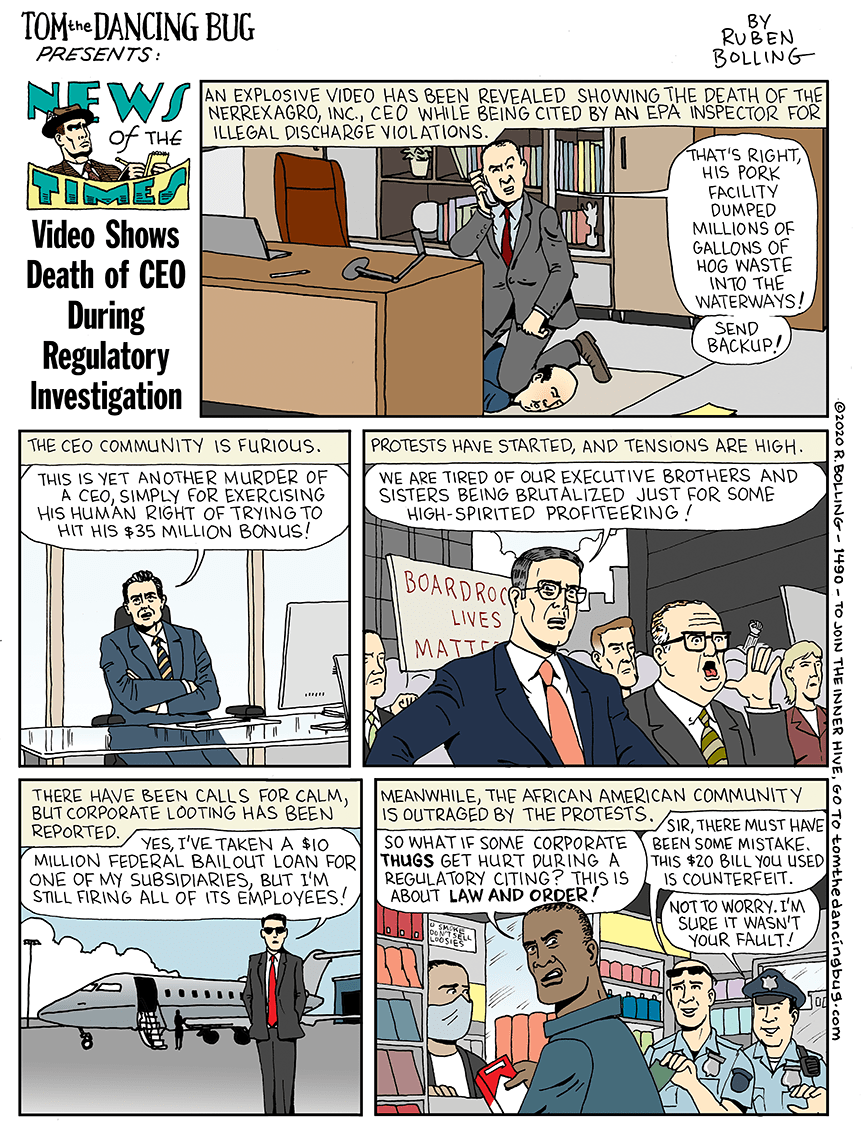 You ought to be able to win in November too, Joe.  Just stop talking.

Former vice president Joe Biden on Thursday said that 10 to 15 percent of "people out there" are just "not very good people.”

Speaking during a virtual town hall with young Americans, Biden discussed the importance of a president setting an example for the country on issues of race during a conversation moderated by actor Don Cheadle.

U.S. Democratic presidential candidate and former Vice President Joe Biden kneels as he poses for a picture with Pastor of the Bethel AME Church, Rev. Dr. Silvester S. Beaman and attendees during a visit to the Bethel AME Church in Wilmington, Delaware. REUTERS Photo by Jim Bourg pic.twitter.com/H0JJYyCTJi

Let Trump do the pandering, make the gaffes, look like the bigger fool, and you've got this.  Don't screw it up by speaking or showing your face, mask or no, for a few months.

*facepalm*
Oh well, it ought to be pre-recorded for TDP delegates this evening, so there shouldn't be any unintended insults or televised flatulence.
Meanwhile, current events have pushed Kamala Harris back into the pole position for the veep.  I'm not the only one who thinks so (again), Cillizza at CNN sees it too.  Amy Klobuchar is over.
It will be tough on Kamala -- and the other two African American women Cillizza favors; Keisha Lance Bottoms, mayor of Atlanta, and US Rep. Val Demings of FL -- because all three women have prosecutorial careers.  (That's another strike against Amy, by the way.)  But the others don't have the KHive, and Harris has been vetted on the issue during primary season.  Berners did that, and she was forced out of the race without winning a single delegate.  Fortunes change quickly, though, and the progressive left appears to this blogger to have stronger options outside the duopoly than ever, which translates into Ds shoring up the base, not just the black vote but the CA electorate as well.  Bernie Sanders won big there, you will recall.
But if Old Uncle Joe just can't get comfortable with a black woman, there's always Elizabeth Warren, who met some favor in the Af-Am community in the South during her campaign.  Unfortunately for her, she's considered a progressive (sic) by the neoliberals, and that might be worse than being black from Biden's -- and those doing the real vetting inside the camp's -- POV.
Some unnamed Dem insider is already on record/off the record as saying Demings doesn't have a chance because Florida isn't really in play, despite what the polls say.  I believe that, and I also believe the same regarding Texas.
Even in the middle of PRIDE month, I just cannot see a "Biden-Bottoms" ticket.
It was hard enough composing this while studiously ignoring Trump's daily atrocities this past week, and with Bernie back in his own basement, and the minor parties' standard-bearers -- the Greens' Howie Hawkins, presumptively, and newly-crowned Jo Jorgensen of the Libertarians -- also reaching the historical summer lull in the four-year cycle ... well, just no urgency or much breaking news beyond the Donks' developments.
The country has bigger problems than choosing between Trump or Biden for the next four years. There's a sentence I never thought I would write.  Two addled geriatrics completely out of touch with the wants and needs of a nation in crisis, with voting suppressed from various sources like never before, and the electorate terrified of a host of ills, to be left unresolved in the near term.
Fun.
Posted by PDiddie at Saturday, June 06, 2020 No comments:

The Texas Progressive Alliance is Zooming the TDP convention.


In creating an event for nearly 12,000 delegates that heads into full public swing from Monday to Saturday of next week, Texas Democrats believe they have created a template for a national party that might have to make some or all of its August nominating convention, now scheduled for Milwaukee, virtual.

“We really believe that we are designing something that is going to make our party stronger, make our party more accessible, allowing more people to participate in the convention and learn about who Texas Democrats are, what we’re fighting for and using the technology that we have to pave that way for the future,” said Brittany Switzer, the party’s senior brand director who led the effort with Hannah Roe Beck, the party’s convention director.

Our morning events were AMAZING 🎉 Don't forget to tune in for our evening events!https://t.co/qFyh0uQZhH #tdp20 pic.twitter.com/Kt7Yq6GSkn
— Texas Democrats (@texasdemocrats) June 3, 2020

This link should let you jump the Statesman's paywall.  Lone Star Republicans will be convening in Houston in person next month.

“We have been developing plans to safely move forward with a spaced-out convention,” Texas Republican Party Chairman James Dickey told the American-Statesman on Tuesday, referring to a gathering of about 7,500 now planned for July 13-18 at the George R. Brown Convention Center.

He said the event will observe appropriate social distancing and respect for face masks even though they won’t be mandated, something anathema to party activists.

“We are confident we will continue to lead the way in showing how we can safely reopen Texas,” said Dickey, also expressing confidence that Gov. Greg Abbott will give the OK for a convention that may serve as trial run for the GOP National Convention Aug. 24-27 in Charlotte, N.C.

More from the TexTrib via Progrexas.

The timing of the convention also comes as the country continues to be gripped by protests over the death of George Floyd, the black Minnesota man who died after he was pinned to the ground by a white police officer using his knee. The party made a number of last-minute changes to its convention as a result, scheduling a moment of silence for Floyd during the Monday kickoff, giving more prominent speaking time to those who can speak to racial justice and adding a panel discussion Monday that features several black leaders. Patrisse Cullors, a co-founder of the Black Lives Matter movement, is set to participate in a separate panel two days later.

.@TexasDemocrats meet this week, but it’s all online: ‘At least the drinks are cheaper’ https://t.co/V49kVtDDmp #TDP20
— Forever in debt to your priceless advice. (@PDiddie) June 1, 2020

With just a bit more on the NeoAmerican Revolution manifesting here in Deep-In-The-Hearta ...

Milton "Big Pokey" Powell, a friend of George Floyd's, called for police to be held truly accountable when they commit violence against civilians.  DosCentavos implored local leaders to change law enforcement culture after the murder of Floyd, and others killed in recent weeks.  Grits for Breakfast despaired at the lack of progress in police reform.  And blogging in the abstract, Socratic Gadfly explained how issues of the duopoly and lesser evilism extend to the Supreme Court, when one looks outside the lens of reproductive choice and sexual choice rights, and especially when one looks through the lens of criminal justice issues and minorities.

Everybody except @BernieSanders, who has more delegates than all but one of these. Not feeling the #Unity, @texasdemocrats. #TX2020 #TDP20 https://t.co/YdDmvJdhxD
— Forever in debt to your priceless advice. (@PDiddie) May 28, 2020

Texas gets screwed over by the Electoral College more than any other state https://t.co/FVEahwUmgW So stop blaming 3rd parties and pass #RCV, #TXLege
— Forever in debt to your priceless advice. (@PDiddie) May 28, 2020

And for some election-related developments ...

A balance between campaigning and coronavirus for #TX10 Congressional District candidates https://t.co/rW39OZhZfh #TX2020
— Forever in debt to your priceless advice. (@PDiddie) May 27, 2020

Living Blue in Texas blogged about the most important November elections that nobody is talking about: the four Texas Supreme Court races.

Allow us to reintroduce ourselves! The Center for Public Policy Priorities is excited to announce our new name and brand. At Every Texan, we focus on our state's greatest resource — our people. #txlege pic.twitter.com/yaPmFvyafl
— Every Texan (@EveryTxn) May 27, 2020

Testing is a key part of reopening, but an investigation into Texas reveals more than just one of the lowest testing rates — it found that four out of six of the largest cities in Texas had testing sites disproportionately located in whiter neighborhoods. https://t.co/y35okYHqoN
— NPR (@NPR) May 27, 2020

After an investigation by the U.S. Department of Labor’s Wage and Hour Division (WHD) Food Management Partners -- based in San Antonio, Texas – has paid $1.3 million to 3,000 employees for violations of the minimum wage and overtime requirements of the Fair Labor Standards Act (FLSA). WHD found the restaurant management company -- which does business as Hometown Buffet, Old Country Buffet, Ryan’s, and other brands in the U.S. -- missed payroll in March 2020, and by doing so, failed to pay required minimum wage and overtime wages to 3,000 employees at more than 75 locations.

Last week, the Harris County Commissioners Court appointed attorney Christopher Hollins as interim county clerk -- a move that seemingly created a conflict of interest for both the county and its new employee.

In July, the commissioners court voted to hire the Hollins Law Group, as well as three other firms, on a contingent-fee basis to represent the county in a lawsuit alleging it overpaid for insulin due to a price-fixing scheme.

And while municipalities hiring outside counsel is nothing new, the Texas Local Government Code, however, does prohibit counties from paying salaried officers fees for work performed outside of their regular duties.

This Wrangle, indeed this blog, relies heavily on Tweets, as regular readers know.  So while there are plenty of complaints being lodged against social media these days, the junior senator from our Great State does not have a valid one.

But Stephen Young at the Dallas Observer does.

"If you take all the cars off the road and it doesn't put a dent in your emissions inventory, then probably cars are not making up a lot of that," especially in industrial Houston, EnvDefenseFund’s Elena Craft tells @NPR. #txlege #txenergy https://t.co/RX4eqetsQ5
— Public Citizen Texas (@PublicCitizenTX) May 28, 2020

And one notable passing.

Lost in the avalanche of police brutality against police brutality protests, the ongoing coronavirus pandemic and subsequent economic meltdown is the occasional bright spot: bipartisan cooperation to celebrate the beginning of PRIDE Month.

All Texans should be able to live freely, without fear of discrimination based on sexual orientation & gender identity. #YallMeansAll #TXLege https://t.co/8BusasqkXv
— ACLU of Texas (@ACLUTx) May 28, 2020

Let's wrap this Wrangle with another happy thing you and your family can do: Have a fun day of picking fruits, vegetables and flowers at this Houston-area farm

We tried to have a peaceful political revolution and y’all called us “divisive.” What happens next is 100% your fault. pic.twitter.com/ujNlnV396M

Several hundred people marched in a #BlackLivesMatter demonstration in downtown Houston, joining national outrage about the death of #GeorgeFloyd with chants of “I can’t breathe” as they trekked from Discovery Green to City Hall.https://t.co/3tsP34TXJg https://t.co/jPKhaUfd85

Guy doing bike tricks on front of police line on protester-blocked I-35 is the most Austin thing today. pic.twitter.com/6h5m4mSnN8

Protests against police brutality spurred by the death of George Floyd in Minneapolis are happening across the nation this weekend.

2 am, bars were closing
Heard the news on channel 4
and The TV anchor tried to say
What she thought really happened today

Scenes from today where several hundred people took to the streets in the protest’s third day to condemn the Austin and Minnesota police departments in the deaths of #GeorgeFloyd and #MichaelRamos. @statesman #AustinProtests pic.twitter.com/KGTSJrPsEl

More Wrangling on the way.
Posted by PDiddie at Monday, June 01, 2020 No comments: