The Texas Progressive Alliance gives a virtual salute to the class of 2020 as it brings you this week's roundup of the best of the Lone Star left from last week.

Scoop: A week after #HarrisCounty Clerk @dtrautman announced she would resign due to health concerns, Commissioners Court plans to debate whether to appoint an independent administrator to run elections instead. Most big TX counties already do this.https://t.co/XKYvJo2Xzy
— Zach Despart🖊️ (@zachdespart) May 18, 2020

With GOP officials fearful of a blue November wave, AG Ken Paxton continues to lead the charge against voting, particularly in the state's metropolitan areas.

Harris County clerk Diane Trautman’s resignation earlier this week serves as a warning about the dangers of in-person voting during the pandemic.

Why does Ken Paxton insist we risk it? https://t.co/cNcYkiKkap
— Texas Monthly (@TexasMonthly) May 15, 2020

As the US Senate contest heats up, John Cornyn's propensity to mimic Trump's bad habit of nicknaming opponents quickly comes back to haunt him.

And David Collins has the very latest on the status of the Texas Green Party's candidates and the lawsuit that will settle the issue of whether they -- and the Texas Libertarian Party's candidates -- will have to pay filing fees to appear on the November ballot.
Scott Henson at Grits for Breakfast has a criminal justice news roundup.

While the rest of Houston’s legal community was adapting to COVID-19, DA Kim Ogg was determined to find who leaked an internal document—with devastating consequences.https://t.co/oXbJ1V2Euf
— Texas Monthly (@TexasMonthly) May 17, 2020

Texas is set to end a freeze on evictions and debt collections, even as almost 2 million of its residents have claimed unemployment over the past 2 months https://t.co/xex8bBQ6SM pic.twitter.com/DLFgd7k5Mh
— Forbes (@Forbes) May 15, 2020


Just in from an advocate in Texas: A 61 y/o man caged in Smith County Jail died of COVID. Didn't tell his family when hospitalized. Didn't tell them when he died. Didn't tell them until they completed the autopsy. Called them at 5am this morning. No humanity. Only cruelty.
— Scott Hechinger (@ScottHech) May 17, 2020

Miguel Gutierrez Jr. at the TexTrib via Progrexas reports that the Texas Workforce Commission had planned to modernize its outdated computer system, but then the pandemic struck.

Mary Lou Ketchum, a substitute teacher in San Antonio, has been calling the Texas Workforce Commission for six weeks and still hasn’t been able to talk to a representative.
Ketchum, 59, filed a claim in early April and was denied, but she thought she’d be eligible for unemployment benefits under the federal coronavirus relief bill, which extends unemployment eligibility to part-time workers. After appealing the decision, she said she is still waiting to hear back.
She said the commission’s website is “primitive” and outdated. Pages load extremely slowly, and whenever she uses the backspace key, the system logs her out, she said.
“It definitely has put a strain on me,” Ketchum said. “I went to the food bank -- I never thought I’d ever have to do that.”

A couple of ecological news updates: The Texas Living Waters Project interprets a SCOTUS decision having to do with the Clean Water Act.

Kinder Morgan can't even figure out how to handle water runoff from the Permian Highway Pipeline but we should believe they will be able to handle an oil spill?#NoPHPhttps://t.co/cDV9unC3Ra
— Indigenous Environmental Network (@IENearth) May 18, 2020

And more reporting about the lives of working people.

Deep in the Rio Grande Valley, the onion harvest is in full swing, even as the state fights COVID-19 with restrictions and lockdowns elsewhere. https://t.co/g3CA7H3IGf
— Texas Standard (@TexasStandard) May 14, 2020

"Kroger is choosing to ignore this pandemic. This is not how we treat heroes in America," says @UFCW president. @HEB's "Texas proud pay" is set to end May 24. @WholeFoods: June 1. pic.twitter.com/uAKW21JHEb
— Gus Bova (@gusbova) May 18, 2020

About two-thirds of U.S. seafood consumption is done through a restaurant, whether around a table or forked out of a to-go container. So when Texas’ stay-at-home order went into effect, despite some exceptions, fishermen’s sales lines dried up. https://t.co/LaXg7T8fqP
— Texas Observer (@TexasObserver) May 16, 2020

And some notable passings with Texas connections.

Sportscaster and former Miss America Phyllis George passed away last Thursday. In our March 2007 issue, Evan Smith spoke with the Denton native about her road to pageantry and the competition's transformation in modern times:https://t.co/RZsfO7Nmoz
— Texas Monthly (@TexasMonthly) May 18, 2020

Yeah ... about that time that Waylon Jennings got fired for playing Little Richard... I wonder if Waylon and Little Richard are laughing about it in rock and roll heaven now.https://t.co/KlA1UeOaJf
— Traces of Texas (@TracesofTexas) May 12, 2020

A 1994 interview with Little Richard in the HouChron allowed him to reminisce about his early years playing in Houston.

He credits Houston's robust R&B scene in the early 1950s as his starting point.
"We played on Lyons Avenue at a club called the Club Matinee," Richard said. "We had a quartet called the Tempo Toppers, and I was the lead singer."
Even in those early days, Little Richard's appearance was as much of a box-office draw as his music.
"Everybody would come to see me because I wore this wild hair, and my complexion was reddish. I think they thought I was an Indian or something. They would pack the club. Houston was really beautiful back then," he said. "I remember the Shamrock Hotel."

In a recent Bayou City History column reprinted from 1955, Sig Byrd recalled the music scene -- and more -- on Lyons Avenue.

Under the branding-iron Texas sun, the corner of Lyons and Hill, Times Square of the Bloody Fifth (Ward), drowses and stirs and drowses again. But let the sun go down behind the Lewis Undertaking Parlor -- “You overtake him, honey; I’ll undertake him” -- and the corner comes alive. It becomes Pearl Harbor, heart of the city to the people who named this town Heavenly Houston.
Pearl Harbor, named that by a weary homicide detective who once had to investigate, in one night, 11 killings in a radius of one block from Lyons and Hill.
By eight bells, Pearl Harbor is a revolving stage, a spectacle that has to be seen to be believed. But you can’t go there at night. Or you can, but you won’t. You can hear it though. Each workday night at 8, Henry Atlas, owner of the Atlas Radio and Record Shop, corner Lyons and Hill, sits down at a broadcasting console in his store. Through a corner of plate glass he can watch the languid tumult of the dusty night unfold in at least three dimensions, while he produces a marvelous radio program called Jive Session.
There’s a piano waiting behind the console, in case live talent drops in. Among the vocalists and musicians who have appeared live on Jive Session are Duke Ellington, Ivory Joe Hunter, Earl Hines, Johnny Hodges, Buster Cartwright, the Ward Singers, the Soul Steerers, the Pilgrim Travelers, the Angelics, the Clouds of Joy and the Stars of Harmony. 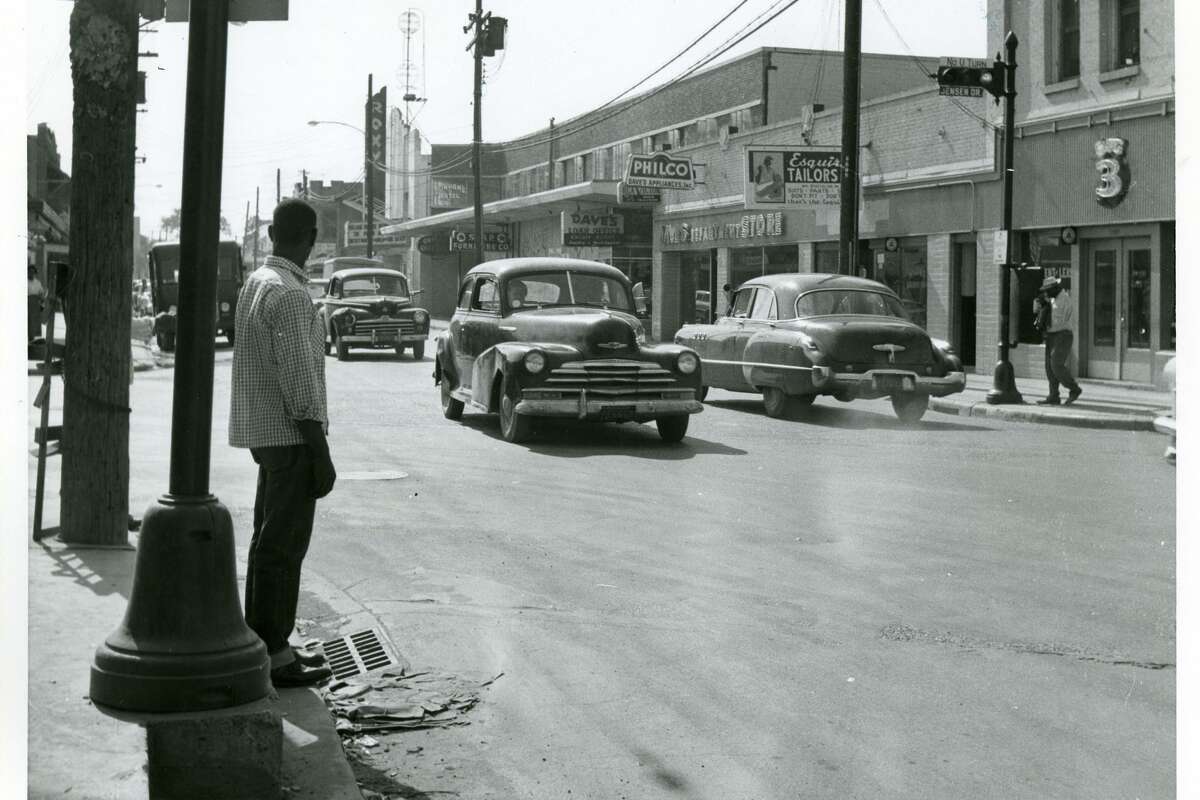 “This is Henry Atlas speaking from the word-famous corner of Lyons and Hill. Dig me with a boogie beat and let the good times roll.”

Henry is a white man who loves the people of the Bloody Fifth. And they love him. He spins a biscuit on one of two turntables. Ray Charles singing “I Got a Woman All the Way Across Town.”

The music goes round and round. It comes out of a loudspeaker on the corner, over the cart of Oscar the peanut vendor, echoing against the walls of the Busy Bee Barbershop and a gumbo house. The Atlas Jive Session comes out of speakers all over town via Radio Morales, KLVL, 1480 kilocycles. And when the show begins the characters of the Ward drift down to the Harbor.