Frankly, this is as fucked up as duopoly politics gets.  I will emphasize the names you should commit to memory.

The strategy is steeped in the tragicomic history of Texas's system of electing judges via partisan elections fueled by special-interest money from both ends of the political spectrum. In 1976, Texas voters mistakenly elevated Don Yarbrough to the Texas Supreme Court – apparently confusing his name with the legendary U.S. Sen. Ralph Yarborough. He ended up serving only one year of his term, spending the rest of it in prison for a murder-for-hire scheme.

Nonetheless, efforts in the Texas Legislature to reform Texas' easily manipulated system of judicial selection have been sabotaged for decades by both political parties.


Yeah, that's a big problem, but the bigger problem is the one nobody wants to acknowledge, and that is that there is too much money in our political system already.  And that is a problem almost nobody wants to talk about, much less do something about.

"A lot of money changes hands in the civil justice system, which is presided over by judges," (former TSC justice Tom Phillips) said. "People are going to be interested in how they (judges) get there."

Phillips' views are shared by Mark Lanier, a prominent Republican Houston plaintiff's lawyer working hand-in-hand with the Democratic lawyers to unseat the incumbents this year.

"I think the partisan election of judges is the worst possible way to choose judges. I am not a fan, but I've got a responsibility to play in the system," he said.


He's got a responsibility, but he obviously doesn't want to make any improvements in a system that benefits everybody.  Just a few others like him among the 1%.

"This is a broad coalition of Texans who believe the court has been taken over by multinational corporations," Balance PAC spokesman Eric Axel said. "The court has become afflicted with affluenza."


This is a narrow coalition of wealthy attorneys who are at least correct in that the SCOTX has gone full fascist.

Axel said 74 percent of jury verdicts granted to plaintiffs are overturned on appeal. "If you are a corporation, you know you can win on appeal," he said. "This court is against the average person."


Texans for Lawsuit Reform disagrees, as you might expect. I won't excerpt their response.

What sticks out like the sorest of thumbs is that Crazy M'F'n Bob Talton is their pick to unseat Nathan Hecht.  In what universe is Talton better than Hecht?  I'll tell you: a universe where there are only two colors, black and white.  No shades of grey.  There's no blue or red, just green (and not the healthy shade of green, either).  There's not even a left or right.

If you needed yet another example of why 50% of Texans are NOT registered to vote, and half of the people who are registered don't bother to vote, then here you go.  Once again, when people say, "my vote doesn't matter", or "they're all crooks", THIS IS WHAT THEY ARE TALKING ABOUT.

Meanwhile, the political consultants who grift from the money men and women are also working hard in their spare time to reinforce the status quo.  If Facebook isn't showing you that, then it's a discussion among Houston folks about how wonderful this article by Ed Kilgore is.

This is nothing more than a whole bunch of not getting it on purpose going on.  You want to see another group of people, much more mainstream, who appear to be completely confused about where their political interests lie?  Look at this.

But to concede one of their points -- and as Gadfly has observed -- the progressive alternative has a long ways to go yet to present itself as viable.  So then here we are... with about 3 of every 4 Texans refusing for a variety of reasons to participate in the electoral process, leaving us all represented by a few wealthy people who are slaves to the extremely wealthy.

I just don't see any way to change any of it in my lifetime, short of what's happened in the Arab Spring nations, and what's happening in the Ukraine, Venezuela, and Thailand at this very moment.  But as this cartoon demonstrates, that development is highly unlikely. 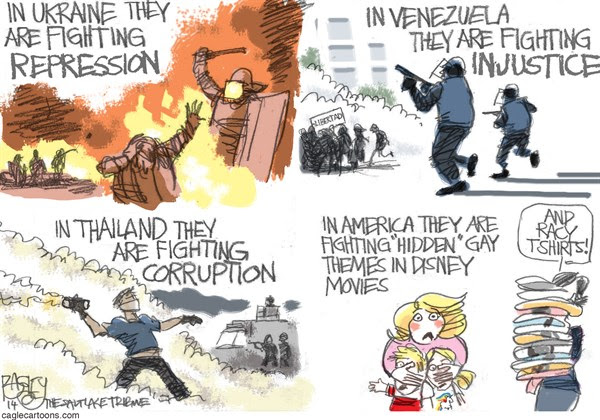 Wasn't it Lanier either you or Kuff wrote about a few weeks ago, encouraging cross-ballot voting? And now we know why.

Do you think an appointment + retention election system would improve things at all?

It was Kuffner, linking to a HouChron piece from that putz Mark Jones at Rice, debunking the value of what Rush Limbaugh called 'Operation Chaos' in 2008.

To answer your question shortly: no. The only thing that will improve things is forbidding ANY money at all spent on judicial races, as a start towards getting all of it out. JMHO

I agree on getting money out period. I mention the retention system as that's what neighboring NM, where I grew up, has.

I think it can lessen money in races, but it's apples to oranges comparing politics across such vastly different states, too, I know.

Interesting that you reference New Mexico, as that's where we're pointed toward retirement (in five years, hopefully less). Direct me to something that will inform me about this, if you would.