Shit been gettin' real this week

So... these things happened just while we were sleeping.

With a bomb strapped to his chest, one of the Boston Marathon suspects was killed early Friday after he and his accomplice robbed a 7-Eleven, shot a police officer to death, carjacked an SUV and hurled explosives out the window in an extraordinary firefight with law enforcement, authorities told NBC News.

The second suspect — the one in the white hat in photos released by the FBI — was on the loose, and police ordered people in the Boston suburbs to stay inside and businesses not to open. Boston shut down its buses and subway system for the hunt.

The suspects are Chechen brothers with the last name Tsarnaev, law enforcement officials told NBC News. The suspect at large, Dzhokar Tsarnaev, is 19 and has a Massachusetts driver’s license, they said. Law enforcement officials told NBC News that both men are legal permanent residents of the United States, had been here about a year and had military experience.


Oh yeah, Texas also blew up the day before yesterday. (I'll come back to that.)

When an Elvis impersonator in Mississippi gets arrested for sending letters with ricin to his senator and President Obama, and that barely makes the news crawl... you know some serious shit has gone down during the week. Oh, and Pete Williams is winning the Internet has been crowned the new King of All Media.

-- So are Chechens Muslim? Why yes, very likely so. Are people of Chechnya "dark-skinned"? That probably depends on several biases, including those of a white, conservative news editor at the New York Post. Since the country is in the region of the Caucasus mountains, I think it's safe to say that Chechens are Caucasian.

This is going to seriously confuse a lot of people, Glenn Beck among them. And chaos, as we all know, leads to fear. 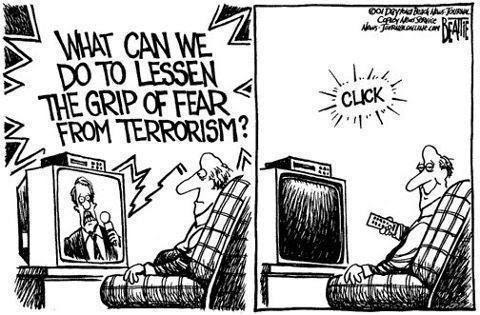 -- West, Texas. Kolaches and fertilizer bombs plants. When Rick Perry brags about the booming state economy, this isn't exactly what he means. It is, however, what he gets. More importantly, it's what we get.

"The company said the plant had no alarms, automatic shutoff system or firewall."


That's two. Can you think of a third one?

(T)he Texas Commission on Environmental Quality (TCEQ) reports that it has pursued seven investigations of the fertilizer plant since 2002, both routine and in response to complaints. The last recorded investigation occurred in 2007, 10 months after the agency dealt with an odor complaint.

The Texas Tribune notes that this probably means the facility hadn't been inspected in the past five years. This would be consistent with a steep decline in the TCEQ's investigations in the past few years. The agency's last annual enforcement report showed that the number of complaints investigated has plummeted by 20 percent since 2007, though it is unclear it has been receiving fewer complaints. Its total number of investigations has fallen by more than 7 percent since 2007. Since 2008, the agency's operating budget has been slashed by nearly 40 percent. The TCEQ has not responded to a request for comment on its investigations and whether it was familiar with the West plant's 2011 risk report.

Turning to the Occupational Safety and Health Administration for information on the plant's safety record turns up little. The plant's last OSHA inspection was in 1985—not surprising considering that it would take the short-staffed agency 98 years for the agency to inspect each of the state's workplaces. (It would take 130 years for OSHA to inspect every workplace in the United States.)

At a press conference, the governor thanked President Barack Obama for calling for offer quick action after Wednesday night’s explosion.

“Last night was truly a nightmare scenario for that community,” Perry said. “President Obama called from Air Force One as he was en route to Boston… We greatly appreciate his call, and his gracious offer of support, of course, and the quick turnaround of the emergency declaration that will be forthcoming, and his offer of prayers.”


"Thanks in advance, buddy, for a quick turnaround on that federal aid that I ain't made a formal request fer yet. And nemmind that crap I talked aboutcher birth certificate and suckseedin' and all."

West's Congresscritter, Rep. Bill Flores -- who voted against federal aid for the victims of Sandy -- pledged to line up at the trough with his hat in hand. He's never been to the fertilizer plant but he's driven past it "scores of times"; he's not going down there now because he'd just get in the way, he IS leading prayers and updating his Facebook and Twitter frequently with updates on how the residents can seek the help they need.

Now for a conservative Republican, that's true leadership. Meanwhile, local blogman Charles Kuffner got out ahead of the congressman. That doesn't surprise me one bit.

I don't think I have time to keep up with the rest of what's going on, but I am going to keep my eyes peeled for a Friday document dump trying to get lost in the noise. And if I were you, I wouldn't watch my teevee or even read my Twitter feed. Trust me: you'll get scared, and not just because some of what it's telling you is accurate.
Posted by PDiddie at Friday, April 19, 2013

FWIW CNN made a fool of themselves again this morning when they demonstrated that one of their reporters doesn't seem to be familiar with the local area. They seemed ti imply that Watertown was part of Boston which isn't true, it's a suburb just outside of Boston and Cambridge and most of the activities took place either in Cambridge or Watertown this time or so it appears.

There is an enormous over reaction but my best guess is that outside of a twenty block area it isn't as extreme. If anyone wants reliable news they should check the local affiliates which seem to be doing a better job. You would think that MSNBC would do better, since they have a local affiliate, and they are but they don't seem to be doing that much better. There still seems to be an excessive amount of scare outside that twenty block area.

Shutting off the TV might be best for some or finding more reliable alternative outlets.

Add to the "what's going on," more than 30 people killed in Baghdad in Iraqi election-runup violence.

Given that Phil Archer was on television talking about tanks of "androgynous ammonia" in West, TX, I think our local folks are right in line with their national counterparts.