Homophobes turned out in droves to support free speech hate on the gay at Chick-fil-A yesterday. 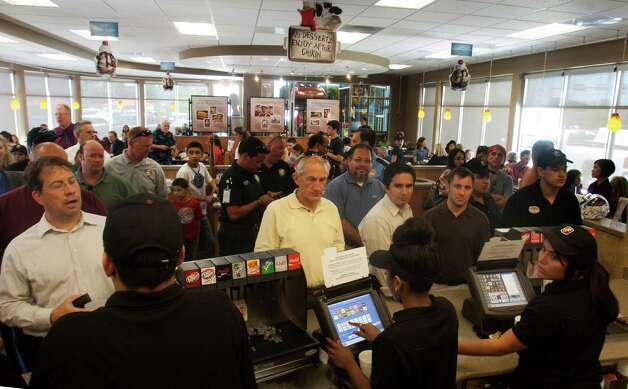 The conversations waiting in a long line at a Houston Chick-fil-A were unusually political Wednesday.

Patrons -jammed into the popular Houston chicken restaurant in Sawyer Heights - said people were asking each other about whether they shared the chain president's views on same-sex marriage or were just hungry.


To demonstrate what a loser this effort is, even David Dewhurst jumped on the bandwagon, hoping to make some last minute hay. 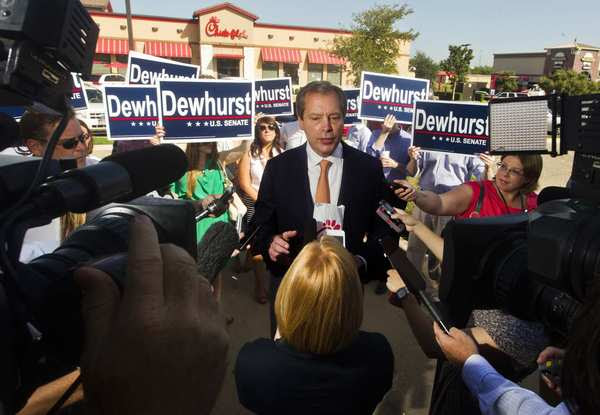 How'd that work out for ya, Dewfucked?

This isn't about Archie Bunker Dan Cathy's free speech rights, nor is it remotely about Obama or "libruls".  It is the same thing it is always about: right and wrong. And I'm not referring to the Biblical version, either.

Chick-fil-A has donated millions of dollars to anti-gay efforts and causes. They even contributed $25,000 to Tony Perkins' Family Research Council -- you may remember Perkins was an active participant in Rick Perry's Prayerpalooza last summer -- which was used to lobby Congress members to not block approval (see, that's different than 'support') of a Ugandan "Kill the Gays" bill.

Chick-fil-A blew goats long before this clever Cathy marketing scheme to shear conservative sheep came together. I'm only talking about their lousy food. Their closed-on-Sunday policy never bothered this atheist.

No, these people -- the owners and corporate executives, not the minimum wage workers, straight or gay -- have made their Christian conservatism a hallmark of their business right from the get-go, to only the mildest of public rebuke. They saw a business opportunity, and like most greedy corporations, took full advantage of it.

But guess what? There's a counterpoint on the schedule for Friday.

Opponents of the company's stance are planning "Kiss Mor Chiks" for Friday, when they are encouraging people of the same sex to show up at Chick-fil-A restaurants around the country and kiss each other. Houston, which elected the country's first openly gay mayor in a major metropolitan area, is considered a somewhat progressive town, said Houston GLBT Political Caucus president Noel Freman.

"I think there are certain aspects that have gotten away from what it was about in the beginning," Freeman said. "There is a lot of momentum in favor of same-sex marriage. It has been in the news a lot in general. When Chick-fil-A goes out and makes this position public, it's going to grab people's attention."

He said Dan Cathy has given money to anti-gay marriage groups that support taking away marriage licenses for people who are already married. Regardless, he said his group is asking same-sex marriage supporters to be respectful of the Chick-fil-A businesses, particularly because the franchise owner may not agree with the corporate stance.

"If people support same-sex marriage, then I think they shouldn't give their money to efforts to impose a federal ban on it," Freeman said.


Did you catch that word 'respect'? That's what this is all about. Oh, and freedom also. Freedom to marry the person you love.


"When it comes to the subjugation of marriage rights, I reckon I'm a bit more progressive than my pals down at Chick-fil-A" ... "Yup, let it be known that Colonel Sanders loves the gays. Hell, I might even be gay."

"I know what you're thinking as you're snuggling up there with your bear, 'How do I know you're not just gibberin' this jab to win more of my gay business? Well, you don't." ...

"But if you have to pick one chicken chain, why not pick us? I know their service is better, but we got those bowls."