The Texas Tribune sells all the way out

It was fairly obvious before last weekend's Corporate Republican Whorefest, but this post by Sharon pretty much seals the deal.

I was invited to appear on a panel after the showing of the documentary Haynesville: A Nation’s Hunt for an Energy Future.

I knew the film depicted natural gas drilling in the Haynesville Shale as an economic miracle for folks in north Louisiana and East Texas, with barely a mention of environmental health risks. I said yes, received an enthusiastic confirmation letter requesting my bio, which I sent in, a request to sign the “Talent Agreement,” and a list of the panel members.

Here’s the rest of the lineup:


I saw I was the token enviro on the panel, but I’ve been a turd in the punchbowl before. I did want to know how the panel would be structured, and if I would have an opportunity to correct their misinformation.

I sent back the following email:

I am quite surprised that your panel is so unbalanced. I would like to get more information on how this panel will work. I don't mind being the token environmental person as long as I have an opportunity to give my vast experiences living in the gas patch and working with people who are suffering from natural gas drilling that is too close to their homes.

The next thing I know: I received a phone call from the festival coordinator notifying me that I was uninvited to participate. Maybe they would find a more suitable panel for me sometime. Ouch! But, on second thought, I reclaimed my weekend and shrugged it off to the influence from T. Boone Pickens, one of the festival’s financial backers.

Then somebody sent me this poster from the event. 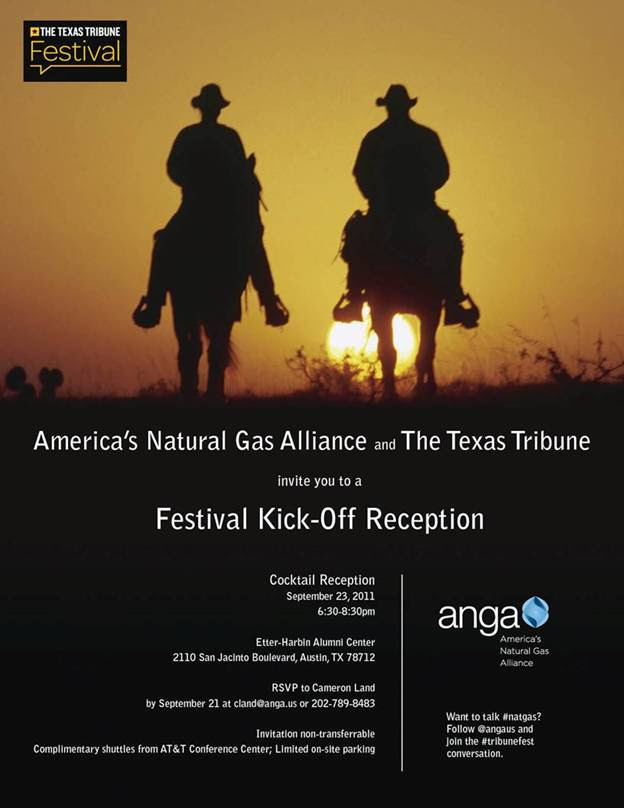 Hmmm. So the Texas Tribune Festival was co-sponsored by America’s Natural Gas Alliance. The Tribune’s website says other sponsors included El Paso Natural Gas and Energy Futures Corp., formerly Texas Utilities. I was starting to put two and two together.

The TexTrib does a fine job with hiring a few good journos at above-scale wages, a great job with maps and data, the occasional blog-styled snark and once in a great while even a breaking news update. They've more or less made obsolete poor Harvey Kronberg's modern-Internet-challenged Quorum Report, though the insiders still pay for Harvey's access to the players. (The Trib is busily fondling that crowd for all it's worth, too.)

But their polling of political races has been absolute shit, and sadly now we know that their integrity is as well.

Then Steve Horn of DeSmog Blog published an investigative piece on Alternet exposing Haynesville as a piece of industry propaganda masquerading as an independent documentary. Turns out Gregory Kallenberg “is actually a well-connected oil and natural gas man, with both a direct and familial financial stake in the ongoing domestic natural gas boom.”

Horn learned that Kallenberg is vice president of his family’s company, Caddo Management Inc. of Shreveport. Caddo Management is an oil and gas exploration company with active drilling operations in Arkansas and Louisiana.

So do you think that when Kallenberg takes his supposed independent documentary to international film festivals he’s upfront about his oil and gas connections and the fact that he’s flacking for the industry? (Even though he makes no mention of them on his website under the “about” section or in “film credits.”)

If you believe that, you probably still believe in the independence and integrity of The Texas Tribune’s shale gas coverage.

Maybe there is an explanation of the Tribune’s behavior that isn’t explained by financial influence of the natural gas industry. But if there is, it is past time for them to make their case. And from where I sit, it better be a doozy.

You just have to understand from now on what you're getting when you read the Trib. You're getting the straight story ... as told by the oil and gas companies' PR departments.

Update: Eye on Williamson is nicer than me, and McBlogger is nastier.
Posted by PDiddie at Monday, September 26, 2011