"George W. Bush says he is glad to be out of the Oval Office because he doesn't have to think all the time. And I'm thinking: wait a minute, that was him thinking all the time. Really?" — David Letterman 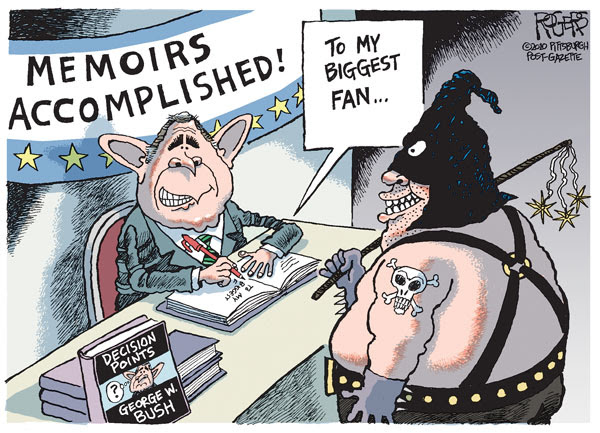 "George W. Bush was interviewed by Matt Lauer, who asked him if he would still invade Iraq if he knew then what he knows now. It's an unfair question. For one thing I don't know if Bush does know what he knows now." — Jimmy Kimmel

"'Decision Points' by George W. Bush has dropped, and it's like 'War & Peace' without the peace. Here's the very first page: 'In the last year of my presidency I began to seriously consider writing my memoirs.' Right away he's got you hooked. Did he write them or didn't he? You won't know until you read the book. Maybe the rest of the pages are blank. If there's one thing we've learned it's that we can't believe something is there just because Bush says it is." — Stephen Colbert

"In his new book, George W. Bush says he’s happy to be out of Washington. Well, it’s unanimous." - David Letterman 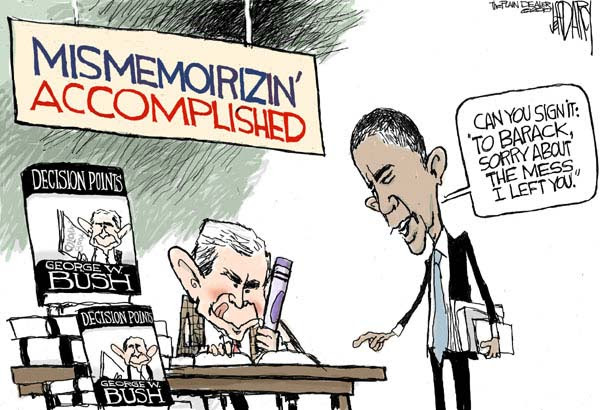 "President Bush told Matt Lauer the most embarrassing thing he ever did drunk was ask a friend of his parents what sex was like after 50. That's nothing. John McCain asked Sarah Palin to be his running mate when he was sober." – Jay Leno