During the Bush era, Republicans from Karl Rove to Joe Wilson questioned — in ways both veiled and overt — the patriotism of Democrats who challenged the administration’s Iraq policy, pre-war intelligence and surveillance programs.

But the joyous reaction in some GOP quarters to the International Olympics Committee's snub of Chicago — coupled with the party’s rapid-fire reaction to bad economic data – has some Democrats turning the tables and asking if Republicans are the ones cheering against America now.

Many Democrats saw the outbursts following the IOC decision – the merry Tweets, videos of cheering conservatives and chest-thumping by party leaders like Newt Gingrich — as part of larger pattern that includes the flirtation of right-wing Texans like Gov. Rick Perry with secession and the caustic tone of right-wing talk radio, embodied by Rush Limbaugh’s “I want him to fail” comment about Obama in January.

“Some of these people are starting to put politics first and country second,” said Rep. Chris Van Hollen (D-Md.), the head of the Democratic Congressional Campaign Committee, taking particular issue with Limbaugh and Glenn Beck.

“The American people are starting to wonder if they are rooting against America,” he added.

Remember "freedom fries" instead of French fries in the Congressional cafeteria? Yeah, even Walter Jones knows now how stupid that was.

That was a long time ago -- before teabag parties, before Orly Taitz and the "birthers", before disruptive town halls, before Barack Hussein Obama not placing his hand over his heart during the national anthem, before Sarah Palin and "death panels", before the scapegoating of Van Jones for calling them assholes, before "You lie", before Rick Perry's secessionist adventure, and certainly before last week's celebrating over Chicago losing the Olympics.

A young organizer at the conservative “Defending the American Dream Summit” interrupted a panel discussion last Friday to reads the news from a BlackBerry.

A tracker attending the event caught the crowd’s reaction in the Arlington, Va. hotel ballroom on video: The place erupted in hooting and wild applause, a scene perversely reminiscent of the exultation that followed the U.S. Olympic hockey team’s “Miracle on Ice” victory against the Soviets in 1980.

“[Chicago lost] on the very first vote! They did not have any chance…” the woman said to an ovation, according to the video, which was recorded by a National Journal tracker and blasted to reporters by Think Progress, an offshoot of the liberal Center for American Progress.

A blogger with the right-wing Weekly Standard reported: “Chicago loses! Chicago loses!... Cheers erupt at WEEKLY STANDARD world headquarters,” before hastily pulling down the post and replacing it with an item that omitted the newsroom reaction.

So obviously this is supposed to be about taking Obama down a notch or two and winning a few seats back in Congress next year, and then the White House in 2012. But it has metastisized in something quite a bit more ridiculous, unstable, and deranged than just political points on a scoreboard. 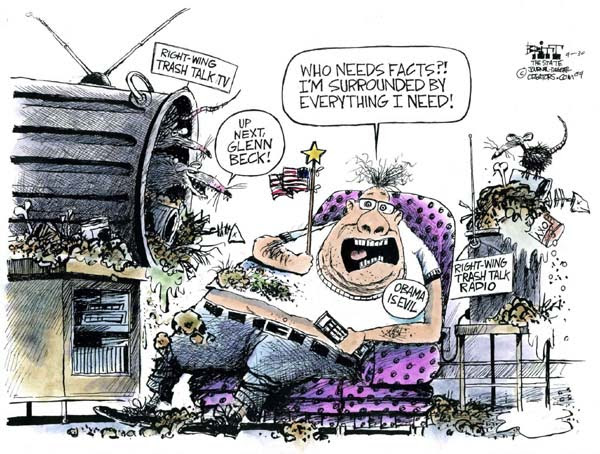 And that's just the locals -- who are, naturally, representative of the last bastion of ultra-conservatism in the country, good ol' Deep-In-The-Hearta. Look who's going to be the next chairwoman of the RPT, after all:

Texas Eagle Forum’s Cathie Adams shows once again how extreme and unhinged the far right has become. In an e-mail to far-right activists sent out late Saturday night, Ms. Adams — who is also a Republican National Committeewoman and has endorsed Gov. Rick Perry for re-election next year — compares President Obama to Adolf Hitler and twists the purpose of his planned speech to students about the importance of staying in school and getting a good education:

“(The president) has NO AUTHORITY to intrude into our children’s classrooms and simultaneously address every child in every state.

If parents want their children to view the president, then they have ample opportunities at home without taking time away from their studies. This is eerily like Hitler’s youth movement. . . .

That’s just shameful. One need not be a supporter of President Obama to agree that comparing our country’s duly elected leader to one of history’s most evil men — someone who ruthlessly presided over the murder of millions of people — is vile. Moreover, no suggested study guide asks students to “serve the president.” Ms. Adams’ claim is simply untrue. And the president has not asserted that he has the authority to demand that school officials have students listen to his speech. The administration has simply invited students and educators to do so. Ms. Adams is dishonestly and cynically trying to stir up anger and hostility toward a president who won an election despite her militant opposition.

Christ, how could I have forgotten all about that whole "Obama isn't speaking to MY children" bullshit.

Personally I don't see this lunacy winning any independent voters back over to the GOP -- quite the contrary -- and I'd like to let them just keep on with their bigotry and ignorance and fear and loathing, but the truth is the last time there was this much crazy going on among the extreme right a president got shot in the streets of Dallas.

And if anything close to that happens again, there will be a lot more than any kind of typical hell to be paid.
Posted by PDiddie at Monday, October 05, 2009