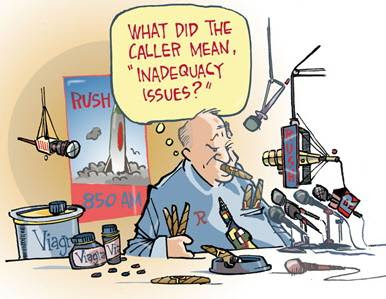 Top Democrats believe they have struck political gold by depicting Rush Limbaugh as the new face of the Republican Party, a full-scale effort first hatched by some of the most familiar names in politics and now being guided in part from inside the White House.

The strategy took shape after Democratic strategists Stanley Greenberg and James Carville included Limbaugh’s name in an October poll and learned their longtime tormentor was deeply unpopular with many Americans, especially younger voters. Then the conservative talk-radio host emerged as an unapologetic critic of Barack Obama shortly before his inauguration, when even many Republicans were showering him with praise.

Soon it clicked: Democrats realized they could roll out a new GOP bogeyman for the post-Bush era by turning to an old one in Limbaugh, a polarizing figure since he rose to prominence in the 1990s.

Limbaugh is embracing the line of attack, suggesting a certain symbiosis between him and his political adversaries.

The bigger, the better, agreed Carville. “It’s great for us, great for him, great for the press,” he said of Limbaugh. “The only people he’s not good for are the actual Republicans in Congress.”

Independent voters hate the guy as much as we do. Independents, of course, are the reason Obama is working at 1600 Pennsylvania Avenue, and why Republicans in Congress have been hosed in the past two election cycles.

They still aren't getting it, though. As Obama's popularity numbers go up, the GOP's go further into the toilet. But because their worst instincts are completely out of control -- like an OxyContin habit -- what is at risk is the very relevance of the Republican party nationally, in the strictest electoral sense of the word.

Paul Begala, a close friend of Carville, Greenberg and White House Chief of Staff Rahm Emanuel, said they found Limbaugh’s overall ratings were even lower than the Rev. Jeremiah Wright, Obama’s controversial former pastor, and William Ayers, the domestic terrorist and Chicago resident who Republicans sought to tie to Obama during the campaign.

Then came what Begala called “the tripwire.”

“I hope he fails,” Limbaugh said of Obama on his show four days before the president was sworn in. It was a time when Obama’s approval ratings were soaring, but more than that, polls showed even people who didn’t vote for him badly wanted him to succeed, coming to office at a time of economic meltdown.

No amount of Tea Parties, CNBC rants, or even the incoherent mutterings of the Vulgar Pigboy himself can stop this slide. They can either re-acquire some semblance of decency, conciliation, and bi-partisanship, or they can't.

To paraphrase Dickens, the last six weeks have been the best of times for Obama and the Democrats, and the worst of times for the Republicans. Just consider the latest findings from our NBC/WSJ poll: Obama’s favorability rating is at 68% (an all-time high in our survey), 67% say they feel more hopeful about his leadership, 60% approve of his job in the White House, and 49% have a positive view of the Democratic Party (which is also near a high). On the other hand, just 26% view the GOP positively (an all-time low in the poll), respondents blame Bush and congressional Republicans for most of the partisanship in DC, 56% think the GOP’s opposition to Obama is based on politics, and Republicans lose by nearly 30 percentage points on the question about which party would do a better job of leading the country out of recession.

While we have covered all the new administration’s ups and downs, it is absolutely clear which party has suffered the most in public opinion these first six weeks: the GOP. NBC/WSJ co-pollster Peter Hart (D) says Republicans “have been tone deaf to the results of the 2008 election… They never heard the message. They continue to preach the old-time religion.” Adds co-pollster Bill McInturff (R), “These are difficult and problematic numbers.”