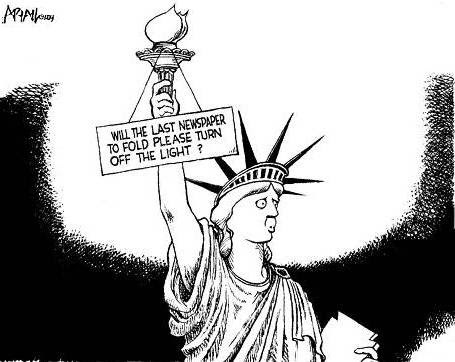 Fresh on the heels of a threat to close the Seattle Post-Intelligencer last month comes Frank Bennack and Steven Swartz with another ominous warning:

The San Francisco Chronicle will be sold or closed unless major cost-cutting measures -- including an unspecified "significant reduction in the number of unionized and non-union employees" -- can be realized within weeks, parent company Hearst Corp. said Tuesday evening.

"If these savings cannot be accomplished within weeks ... the company will be forced to sell or close the newspaper," Hearst said in a statement. The company claims the Chronicle lost more than $50 million last year, "and that this year's losses to date are worse." The paper has had "major losses" each year since 2001, the company added.

"Because of the sea change newspapers everywhere are undergoing and these dire economic times, it is essential that our management and the local union leadership work together to implement the changes necessary to bring the cost of producing the Chronicle into line with available revenue," said a joint prepared statement by Frank A. Bennack Jr., vice chairman and chief executive officer of Hearst Corp. and Steven R. Swartz, president of Hearst Newspapers.

When I worked for Hearst in the 80's they owned the San Francisco Examiner, and the publisher was W. R. Hearst III, grandson of you-know-who. It was still considered the flagship, the one from which The Chief had built an empire. The company sold off that paper (in a hilarious comedy of very public errors) and bought the crosstown rival Chronicle, the more successful in circulation and ad revenue of the two. They had previously been married in a JOA (just like the P-I, just like the San Antonio Light -- RIP -- and the Express-News).

And now, apparently, they have run that one into the ground.

I suppose Hearst just isn't interested in being in the newspaper business any longer.

Update: And today, the Rocky Mountain News -- two weeks shy of its 150th birthday -- publishes its final edition. No online version will continue to be offered.

(Yesterday's) announcement comes as metropolitan newspapers and major newspaper companies find themselves reeling, with plummeting advertising revenues and dramatically diminished share prices. Just this week, Hearst, owner of the San Francisco Chronicle, announced that unless it was able to make immediate and steep expense cuts it would put the paper up for sale and possibly close it. Two other papers in JOAs, one in Seattle and the other in Tucson, are facing closure in coming weeks.

The Rocky was founded in 1859 by William Byers, one of the most influential figures in Colorado history. Scripps bought the paper in 1926 and immediately began a newspaper war with The Post. That fight ebbed and flowed over the course of the rest of the 20th century, culminating in penny-a-day subscriptions in the late '90s.

Perhaps the most critical step for the Rocky occurred in 1942, when then-Editor Jack Foster saved it by adopting the tabloid style it has been known for ever since. Readers loved the change, and circulation took off.

Staffers were told to come in Friday to collect personal effects.