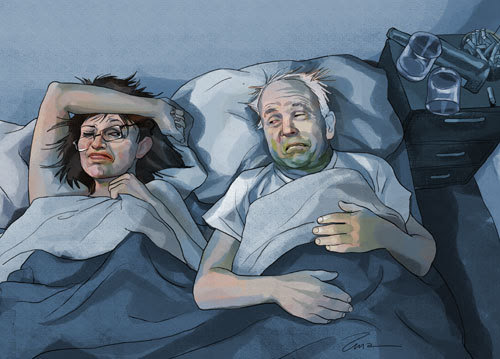 RNC lawyers are on their way to Alaska to audit Palin's wardrobe expenses.

“I think it was a difficult relationship,” said one top McCain campaign official, who, like almost all others interviewed, asked to remain anonymous. “McCain talked to her occasionally.”

Some of this is the typical Monday-morning quarterbacking when you lose. Some is SNL satire-worthy:

The disputes between the campaigns centered in large part on the Republican National Committee’s $150,000 wardrobe for Ms. Palin and her family, but also on what McCain advisers considered Palin’s lack of preparation for her disastrous interview with Katie Couric of CBS News and her refusal to take advice from McCain’s campaign.

But behind those episodes may be a greater subtext: anger within the McCain camp that Palin harbored political ambitions beyond 2008.

As late as Tuesday night, a McCain adviser said, Palin was pushing to deliver her own speech just before McCain’s concession speech, even though vice-presidential nominees do not traditionally speak on election night. But Palin met up with McCain with text in hand. She was told no by Mark Salter, one of McCain’s closest advisers, and Steve Schmidt, McCain’s top strategist.

On Wednesday, two top McCain campaign advisers said that the clothing purchases for Palin and her family were a particular source of outrage for them. As they portrayed it, Ms. Palin had been advised by Nicolle Wallace, a senior McCain aide, that she should buy three new suits for the Republican National Convention in St. Paul in September and three additional suits for the fall campaign. The budget for the clothes was anticipated to be from $20,000 to $25,000, the officials said.

Instead, in a public relations debacle undermining Palin’s image as an everywoman “hockey mom,” bills came in to the Republican National Committee for about $150,000, including charges of $75,062 at Neiman Marcus and $49,425 at Saks Fifth Avenue. The bills included clothing for Palin’s family and purchases of shoes, luggage and jewelry, the advisers said.

The advisers described the McCain campaign as incredulous about the shopping spree and said Republican National Committee lawyers were likely to go to Alaska to conduct an inventory and try to account for all that was spent.

That's not even the funny part. And no, I don't mean the crankyanking that happened when Palin thought she was talking to the president of France, either:

At the GOP convention in St. Paul, Palin was completely unfazed by the boys' club fraternity she had just joined. One night, Steve Schmidt and Mark Salter went to her hotel room to brief her. After a minute, Palin sailed into the room wearing nothing but a towel, with another on her wet hair. She told them to chat with her laconic husband, Todd. "I'll be just a minute," she said.

You realize what this means, don't you? It means we get to see Tina Fey in just a towel this weekend. Hawte.

Update: Is Africa a country or a continent, Sarah?

Update II: "Wasilla hillbillies looting Neiman Marcus from coast to coast". Sounds more like a couple of grifters to me:

On top of the $150,000 first outlined in Federal Election Commission filings, Palin spent "tens of thousands of dollars" on additional clothing, makeup and jewelry for herself and her family, including $40,000 in luxury goods for her husband, Todd, our colleague Michael Shear reports. The campaign was charged for silk boxer shorts, spray tanners and 13 suitcases to carry all the designer clothes, according to two GOP insiders.

"The shopping continued after the convention in Minneapolis, it continued all around the country," one source said. "She was still receiving shipments of custom-designed underpinnings up to her 'Saturday Night Live' performance" in October. Sources said expenses were put on the personal credit cards of low-level Palin staffers and discovered when they asked party officials for reimbursement.