(Taxes are all but done, every deal I think I'm going to close ahead of the 15th is probably closed, shoulder's feeling better ... back to the blog. I never got around to writing anything about the NCAA tournament; my bracket had North Carolina over Texas anyway. I didn't think Kansas could beat Memphis either. So ... there's a new baseball season underway. Here's a great story about Doug Davis, the Arizona Diamondbacks pitcher currently undergoing treatment for thyroid cancer.) 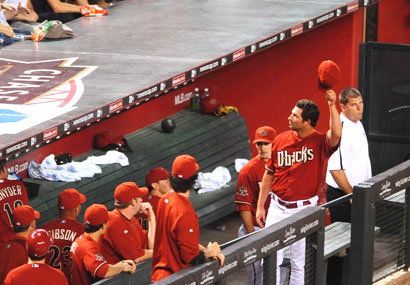 Doug Davis arrived Tuesday afternoon with his cap on backward and sunglasses clamped to the back of his neck, saying a couple hellos to the boys in the lockers nearby, the usual routine.

Just before game time, he walked the length of the dugout, a white towel draped over his left shoulder, touching hands with every teammate, the usual routine.

He loped across the field – one long hop over the foul line – to the mound, the usual routine.

He looped a curveball for a strike to Rafael Furcal, the usual routine.

He struck out a couple in the first, got a bunt down in the second, drove in a run in the third, singled again in the fifth, and took a shutout into the sixth.

All routine (except for the hits). All, just baseball.

And now Doug Davis will go try to rid his body of the cancer.

Davis, who will undergo surgery to remove his cancerous thyroid Thursday, said good-bye for a month or more with six strong innings, a pump of his fist, a tight-lipped nod of his head and a wave of his cap.

The people here wished him luck with a standing ovation and a request for a curtain call, which Davis – appreciative of the gesture, regretting the circumstances – granted.

He is 32 years old. A family history of thyroid cancer found him a couple weeks ago. And in the seventh inning, his baseball done for a while and the rigors of surgery and extended treatment and some yet unanswered questions waiting, Davis sat on the bench and massaged his throat right about where they found the lump, and where the surgeon will cut.