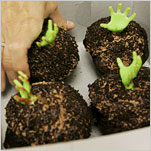 Yummy. Oh wait, I have diabetes. OK, hold the chocolate sprinkles that look like freshly-turned dirt.

Down the street, customers are lining up at Leslie Watson's art store to buy $15 T-shirts reading, "The F.B.I. Digs Milford, Do You?"

And Jon Stewart (with a Sopranos reference, lost on those of you not watching this final season):

"Finally a break: they may have found Jimmy Hoffa. Ten FBI agents armed with shovels dug up a farm after a tip it might contain the Teamster leader's remains. Of course, many myths surround Hoffa's disappearance. Some say he is buried in the end zone of the Giants' stadium. Some say he was dumped in Lake Michigan. Some think he is alive and in New Hampshire having an affair with a volunteer fireman that he calls 'Johnnycakes.' But I hope, 31 years later, if they find him, it will make touchdown celebrations in the end zone of the Giants' stadium so much less creepy. Still looking for Jimmy Hoffa after 31 years. That means they'll find Osama bin Laden in 2037."