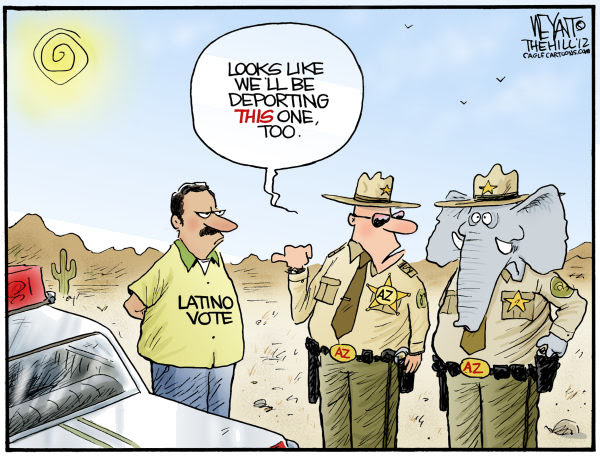 A couple of debates last night

Both were in Houston. One was televised. The US Senate candidates were at the Melcher Center at U of H, and the Harris County DAs -- also known as the Republicans -- gathered at TeaBagger Central. 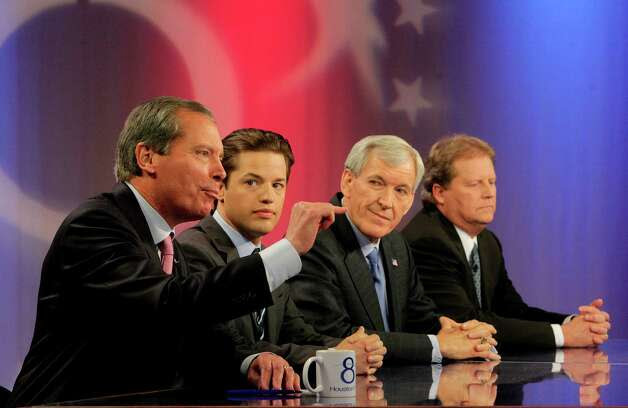 "The reason that he's lying," he said, "is because conservatives all over this state are uniting behind our campaign."


Isn't this too nasty even for the TeaBags?

I was shocked at the anger and animosity Ted Cruz demonstrated throughout the evening. Sadder yet, Dewhurst tries too hard to match it thinking he's appealing to the same subset, but that's a fool's game for him.

Craig James really might need to kill 5 hookers in order to get some attention, and poor Tom Leppert is going to have to fire his makeup artist after she made him look ready for casketing last night. But the creepiest thing was seeing Harris County Clerk Stan Stanart, in every shot just over the shoulder of the moderator in front of the audience, half-grinning at the camera all night long. It was disturbing, I tell you.

The two Democrats, former state Rep. Paul Sadler and Sean Hubbard, a 31-year-old small-business owner from Dallas, faced the dual task of introducing themselves to a broader audience and quickly offering a contrast to their GOP counterparts. Texans haven't elected a Democrat to statewide office since 1994.

Hubbard said he was older than Joe Biden the vice president, when he was elected to the US Senate from Delaware at 29. "I'm the only one in the race who isn't a career politician or a super-wealthy person," he said.

Sadler, an acknowledged expert on public school finance when he served in the Texas Legislature from 1991 to 2003, used his interview time to talk about education.


Hubbard impressed me with his knowledge and his poise (but I've been on his bandwagon for a long time now). Sadler was the legislative heavyweight champion on that stage -- much more experience and success even than the light gov -- but he's stultifyingly boring, untelegenic, and appears to be running a campaign as an independent in the grand Joe Lieberman tradition.

Time for a youth movement in the US Senate. And if the Dems can't nominate Hubbard I will easily transfer support to the Green, David Collins.

Update: Here's Peggy Fikac's live-blog of last night, and if you click here, you can vote in the online poll for the candidate you support in the primary (click on 'newest' if you don't see it when the page loads). Sean Hubbard is currently leading. ;^)

You'll have to wait for Big Jolly to post his slathering review -- here's the advance -- of the DA swap meet when he gets around to putting it up. I'll only say that by excluding the Democratic candidates for district attorney, KSP strengthens the case against them in the lawsuit they have already lost once.

Update III: Here's TexTrib's video of the entire two-hour affair. One-on-ones with Dewhurst, then Hubbard, then Leppert, then Sadler, and then James and Cruz. My advice is to fast-forward through the Republicans unless you are a masochist. The best part -- the second hour -- is when all six are together at the table and fielding questions from the moderators.

Give me your thoughts in the comments.
Posted by PDiddie at Friday, May 04, 2012 No comments:

Real guns WILL be banned in the 'free speech' zones, however

You know, the ones outside the convention hall down the street, where those anarchists and dirty hippies exercising their First Amendment rights are being kettled.


In the politically-charged and likely protest-filled streets of Tampa, Fla., during the Republican National Convention in August, water guns will be strictly prohibited. Concealed handguns, on the other hand, will be perfectly legal.

Florida Gov. Rick Scott said this week that banning handguns from downtown Tampa during the convention, as the city's Mayor Bob Buckhorn requested, "would surely violate the Second Amendment."

"It is unclear how disarming law-abiding citizens would better protect them from the dangers and threats posed by those who would flout the law," Scott said in a letter to Buckhorn Tuesday, emphasizing the words "law-abiding." "It is at just such times that the constitutional right of self defense is most precious and must be protected from government overreach."

Buckhorn said today that he was "disappointed" by Scott's decision, but that the city will "plan and train accordingly."

Tampa officials are expecting thousands of protesters to descend on the Florida metropolis for the GOP convention. While no handguns will be allowed inside the convention, which is being protected by the Secret Service, concealed carry license-holders will be able to carry their weapons in the streets surrounding the convention.

They will not, however, be able to have "super soaker" water guns, sticks, poles, portable shields or glass bottles.

Business remains brisk and posting has been light for weeks now, so here's a review at the WaPo from the recently published Lyndon biography by Robert Caro.

The book opens in the rump years of the Dwight D. Eisenhower administration, with our hero — or should that be antihero? — contemplating a presidential run. It chugs through the grand detour of John F. Kennedy’s reign, with LBJ sulking on the sidelines. And it ends in the first weeks of Johnson’s presidency, which has been thrust upon him by JFK’s assassination.

Although these are, for Johnson, years of relative inaction, Caro infuses his pages with suspense, pathos, bitter rivalry and historic import — with Robert F. Kennedy in particular emerging as a nearly co-equal, second lead in the psychodrama, always looming offstage and threatening frequently to steal the spotlight from his arch rival.

In Caro’s account, LBJ comes across by turns as insecure, canny, bighearted, self-defeating, petty, brilliant, cruel and, of course, domineering. In the opening pages, he longingly eyes the presidency but, psychologically paralyzed, can’t bring himself to declare his candidacy or enter even a few primaries. Instead, he rages at the upstart Kennedy, who shows unforeseen proficiency in the old game of locking down governors and state Democratic Party leaders for the convention and in the new game of winning over the masses via television.

When Kennedy claims the party’s mantle in Los Angeles and searches for a running mate, a different Johnson suddenly appears: calculating, cagey, capable of subsuming his contempt for Kennedy to a steely desire to place himself next in line for the presidency. LBJ has staff members look up how many presidents had died in office and then does the cruel math, admitting in many conversations — and Caro recounts several of them — that such a route is his best hope of becoming president himself.

About a decade or longer ago I went with some online friends -- we were meeting offline -- to the LBJ library, which I always have considered a tour de force of the man's life. I was not an admirer of Johnson so much as I was in awe of him, much like Caro (and everybody else for that matter).  In our group of about ten was a guy who had fought in Vietnam, come home and protested the war, been gassed, arrested, etc. I did not know this prior to our tour; in fact I found out about a year or so later. As we left the library I asked him how he liked it and he said he didn't. I apologized (I had organized the trip) and he shrugged and said, 'no problem", so I forgot about the incident.
Sometimes my superhuman ability to empathize with others fails me. Anyway...

When Kennedy is shot in the Dallas motorcade, Johnson is transformed again — in an instant, according to Caro. Facedown on the floor of his car, a Secret Service member’s foot planted in his back, Johnson is magically possessed by self-assured calm. Rising to the immense challenges before him, he guides the country with a strong hand through the dark days of November using Kennedy’s martyrdom to realize his slain predecessor’s unfulfilled agenda, although not without exacerbating already-miserable relations with Robert Kennedy.

Like Popeye after a can of spinach, the once-impotent Johnson finds his legislative powers revived. The previous summer, as Kennedy was preparing to introduce at long last a civil rights bill, Johnson had advised Ted Sorensen, JFK’s close aide, to wait until he passed other key legislation first, because Southern senators would hold it hostage. “I’d move my children [the other bills] on through the line and get them down in the storm cellar and get it locked and key[ed],” he urged, but to no avail.

In December, however, Johnson, now president, undertakes a series of brilliant legislative maneuvers, which Caro deliciously recounts, to pick the locks of the congressional committees that had been caging up Kennedy’s controversial civil rights and tax bills and set them free.


If only Lyndon's ghost had provided some inspiration to Barack Obama with respect to the Affordable Health Care Act. Can't blame LBJ in the grave for someone else's lack of leadership, though.

Read the rest here. Now if you'll excuse me, I'm going back to reading the book itself.
Posted by PDiddie at Wednesday, May 02, 2012 No comments: