The progressive movement in Houston lost two of its warriors last week.

"From the '60s to 2011, there was barely a progressive movement that took place that did have the involvement and leadership of Ester King," said longtime friend and fellow Houston activist Omowale Luthuli-Allen. "I'm going to miss his intellectual brilliance, his unceasing devotion to peace and freedom and I'm going to miss the steadfastness that he had to encourage the community to have a backbone."

Of the many writings King left behind is this explanation about his initial interest in social justice: "There was one incident that really caught my attention, the Emmett Till lynching in Money, Mississippi in 1955. He was my age, on vacation with relatives in a rural farming town just like Magnolia Springs. As I looked at that infamous picture of his coffin-enclosed corpse (almost recognizable as human) in Jet magazine, I learned to my utter horror that lynching was not reserved for adults."

King supported causes ranging from environmental justice as well as the rights of workers, women, tenants, children and immigrants. He was involved in the Free South Africa movement, anti-death penalty coalitions and efforts to address police use of deadly force.

"He was consistent. Some people were involved when they were young, but he stayed on the front lines and he helped train a whole new generation of organizers and activists in the community," said Kofi Taharka, national chairman of the National Black United Front. "There are a lot of younger people, like myself, that consider him a mentor and adviser. He dedicated his life to the liberation of African- American people and social justice causes for all people."

At the Harris County Green Party's Labor Day function Saturday evening, the lives and legacies of King and Jon Axford were celebrated.

Here's what Jon had to say about himself on his Facebook page: "I post pictures on Indy Media, I try to help promote peace in the world, etc." Indeed Jon contributed much to many peace and justice campaigns over the years. From anti-war protests to Veterans for Peace to campaigns against Halliburton, Jon was always there to help.

One of his enduring contributions is the hundreds of photo essays he took and posted here on the Houston Indymedia site.

Even as progressives in Houston and Harris County grow the movement, it hurts to lose the history and the spirit these two men represent.

May they rest in peace.
Posted by PDiddie at Monday, September 05, 2011 No comments:

From my friend David Van Os.

This weekend a multitude of elected and would-be political officeholders are appearing at Labor Day picnics. Hoping to obtain labor endorsements for their next candidacies, they ascend the speaker’s platforms and loudly swear their undying loyalty to the issues of working families. 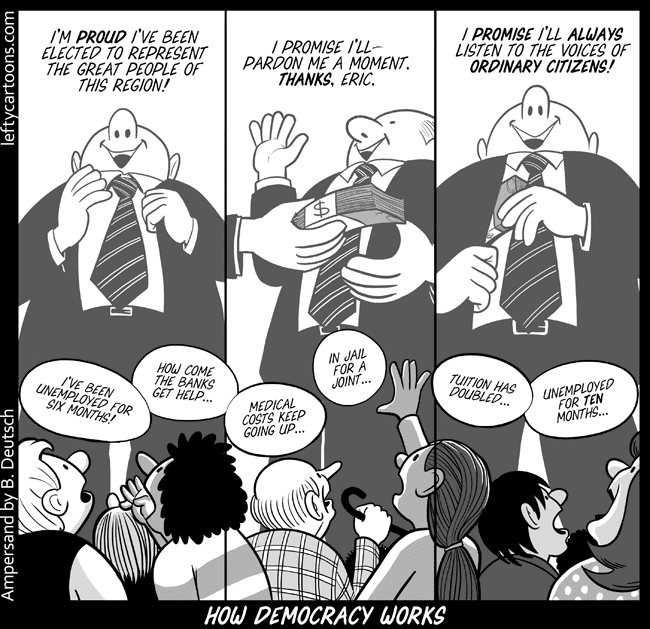 My great hope for this Labor Day 2011 is that working people will finally tell the politicians:

“We are tired of Labor Day speeches without action. Talking big at a Labor Day picnic where it is safe and convenient is meaningless crap. Tell the truth out there in the world about the class war that the gilded aristocracy of corporate executives and bankers is waging against the people. Tell the truth out there with passion and anger. Fight for the truth. Use your votes in the assemblies of government to defend the people against the powerful. Stop compromising with evil. Stand up and fight for us. Fight to tax the rich, stop the wars, defend workers and unions, restore the Constitution, defend the poor and the helpless, and protect the environment.

And next year don’t come back with mealy-mouthed excuses for why you didn’t fight for these things and why you compromised us. We don’t expect you to win every vote but we DO expect you to fight like Travis at the Alamo, like the Minutemen at Bunker Hill, like Chavez in the lettuce fields, like King in Alabama, like Gandhi in India, like Mandela in South Africa -- always fighting for the right and never giving up.

Fight like a warrior for truth and justice or don’t come back.

We would rather be left alone to enjoy next year’s Labor Day with our friends and families whom we love and trust than listen to one more lie or one more excuse from one more compromising politician.”

Posted by PDiddie at Monday, September 05, 2011 No comments: 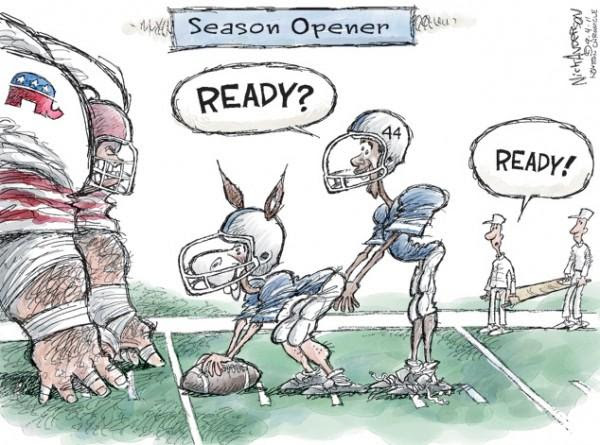 Posted by PDiddie at Sunday, September 04, 2011 No comments:

Waiting for the skinny kid to fight back against the bullies. Still waiting.

The Audacity of Weakness.

So, (capitulating on the the day of his jobs program speech to Boehner) leads to the eternal question of whether Obama is just weak or if he is a brilliant strategist who has been playing rope-a-dope all along. I am so silly that I still had hope. My hope this morning was that Obama was laying a trap for the Republicans. He picks a day for his speech that is the same as the GOP debate. Then if Boehner says he won't let him give the speech on that day, he seems so petty and harsh.

That way, either the president gives his big speech on jobs and bigfoots the Republican contenders or the Republicans look disrespectful and petulant for turning down the president. Well, if you're playing rope-a-dope, that's not a bad maneuver. But it turns out that's not what he was doing at all. He just stumbled into this problem and then stumbled out when he let Boehner dictate when he could and could not have his speech. That looks so sad.

You see, if you're playing rope-a-dope, at some point you have to actually swing. When your opponent has worn himself out knocking you around the ring, you counter-attack. But that counter-attack is never coming. We're holding our collective breaths in vain.

Really, I go back all the way to the second debate with John McCain (the one where they stood at lecterns, not the first one where they sat on stools and walked around, or the third one where they sat at the 'newsdesk'). I watched it at a public venue, the Cotton Exchange bar in downtown Houston. Peter Brown sat right beside me. I was literally screaming "punch back!" at the television.

This must be how parents feel when they have a child who keeps getting bullied at school.

I long ago realized that Obama just wasn't a fighter. And the problem with that is -- see, people understand this instinctively -- if you won't fight back for yourself, you sure as hell won't fight for anybody else.

Why is this definitely not rope-a-dope? Because Obama hates risk. Even his most ardent supporters will tell you that he does not like to take big risks. He thinks it is imprudent. They see that as one of his strengths. McCain was a wild gambler, Obama was a cautious and smart poker player. That's why he won the election.

But would a man who dislikes risk that much risk his entire presidency on a strategy where he gets pummeled for three straight years and then finally comes out swinging at the very end? No way. That's a tremendous amount of risk. I don't mind taking plenty of risks, and I wouldn't do anything half that crazy.

No, the answer is much simpler. He doesn't realize he's getting pummeled. He thinks this is all still a genius strategy to capture centrists by compromising on every single little thing. He is not trying to put on an appearance of weakness to lull his opponent into a false sense of complacency. He doesn't even realize he is being weak. He's the one with the false sense of complacency. As he's getting knocked around the ring, he thinks he's winning.

These guys in the Obama camp are in for a horrible, rude awakening. Sometime in the next year, they are going to blink and realize they are lying flat on their back on the canvas. Then as they finally stumble up, they'll realize they should have started fighting 11 rounds ago. Then a panic will set in, but I'm afraid it will be too late by then.

I feel like I'm watching that movie Million Dollar Baby, and the fight scenes where she gets mortally wounded are in slow motion. We still have over a year to go of this scene.

Here is what all voters, and especially independents, despise and disdain in a politician -- weakness. Nobody wants to see their leader get beat to a pulp every night and then bow his head again.

There is no secret, brilliant strategy. This White House is in a bubble. They think they're winning when the roof is about to cave in.

Did I forget to mention that since he caved on his jobs speech, he also caved to the Republicans and the oil companies on EPA regulations?

But nothing tops the quarrel our nation's leaders had over a speech about jobs for America conflicting with a primary debate. And now that speech conflicts with the opening game of the NFL season. Thank goodness the NFL isn't whining about that.

Update: Oops. They did.

The Green Bay Packers and New Orleans Saints kick off at 8:30. Would the president mind too terribly much speaking before the game so as not to interfere? Once again, Obama obliged.

I suppose conflicting with the pre-game is no problem. The president should just be thankful he's not going up against American Idol. Or Dancing With the Stars.

We're all the way to Idiocracy now.