(insert The Who's "Won't Get Fooled Again" catch phrase here)

It's been a little overused in blog headlines of late. So anyway, I suppose I can believe now:

Joe Straus, a legislator from San Antonio with just one full legislative session behind him, all but assured his election as the next speaker of the House on Monday, picking up at least 12 more pledges from House members and losing his only remaining opponent.

Rep. John Smithee, R-Amarillo, dropped out of the race Monday afternoon. Smithee was endorsed by Speaker Tom Craddick on Sunday after Craddick had given up the fight for a fourth term as the House's leader.

Straus, 49, said more than 100 House members were now committed to vote for him when the session convenes Jan. 13. The minimum number required for election as speaker is 76. ...

Straus stands to become only the second urban House speaker in 70 years and the first since Gib Lewis of Fort Worth won the powerful office in 1983. Only one other San Antonio member has been elected House speaker: Chester Terrell in 1913. The last Houston House speaker was R. Emmett Morse in 1939.

Vince thinks Straus is bad news for Democratic prospects of taking back the House, especially in 2010 when redistricting will be on the slate. Philip, not so much. Guess we'll have to wait and see.

As Will Hartnett, Sid Miller, and Alexis DeLee prepare the body for viewing, let's catch up on last week's postings from the blogs of the Texas Progressive Alliance.

BossKitty at TruthHugger sees the USA is not the "goodie two shoes" it claims to be. Among other discrepancies, euphemisms don't change hard cold facts: US Teaches Terrorism As “Irregular Warfare”.

CouldBeTrue of South Texas Chisme notes the monarchists are using words like 'insurgency', 'coupe d'etat' and 'overthrow' to describe the Speaker's race.

Neil at Texas Liberal wrote about how our terrible Texas Senator John Cornyn is silent on hard economic times in Texas, but quite vocal about the Senate race in Minnesota.

The Texas Cloverleaf looks at the possibility of a higher federal gas tax, and offers suggestion on new ideas.

Off the Kuff looks at various possibilities for the presumed eventual special election to replace Kay Bailey Hutchison in the Senate.

jobsanger addressed both political and lifestyle issues last week. First, he answered those who questioned the qualification of Caroline Kennedy to be a senator in Is Kennedy Qualified?, and then expressed his amusement that a swinger's club exists in the absurdly religious Texas Panhandle in Panhandle Swingers - Who Knew?

PDiddie at Brains and Eggs remains skeptical about the prospects of Tom Craddick being unseated. He's still got Hope for Change, he just isn't sure that the Republicans have it in them.

McBlogger this week takes a look at the hard times some are having the Bush's 'Economic Miracle'. Mayor McSleaze gives us an inside look at a Wendy's in DC metro that has a Supreme new employee.

WCNews at Eye On Williamson says that Ronnie Earle should run for Governor of Texas.

Vince at Capitol Annex takes a look at Joe Strauss, the candidate for speaker anointed by the 11 "Anybody But Craddick" Republicans and now the presumed Speaker.
Posted by PDiddie at Monday, January 05, 2009 No comments:

Do you think he's really dead this time?

I can't quite shake the feeling that I'm watching one of the thirteen Halloween films and that Michael Myers Tom Craddick, though he has been shoved out a third-story window, is going to rise yet again to savage the naive teenagers the House Democrats, not to mention poor Texas children and most of the rest of the state's population as well -- excepting a few conservative politicians and lobbyists, and thousands of corporate executives.

(Hell of a run-on sentence that was.)

It's still a week before the vote. I think I'll hold off on the cheering until they drive a stake through his heart AND cut off his head, as in Bram Stoker's versions.

Meanwhile you can raise a post-New Year's toast with those who are celebrating (I certainly don't mean to rain on anyone else's parade).
Posted by PDiddie at Monday, January 05, 2009 No comments:

The new dog's name is Lucky 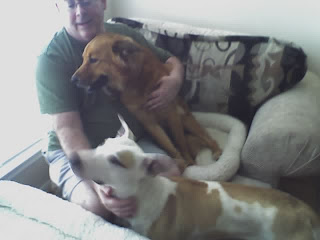 She's a pittie, about two years old, found us on our walk on New Year's Eve. Wonderful disposition -- sweet, calm, loves to play with the #1 dog. We're going to keep trying to find her owner before we decide to keep her. All of the so-called "no-kill" shelters aren't really when it comes to a pit bull. The breed gets a bad rap.
Posted by PDiddie at Sunday, January 04, 2009 No comments: