Famed documentarist Alex Pelosi (yep, she's related) has a new film chronicling her visits with the fundamentalists shaping America, and she and it are making a debut in H-Town:

With her unique brand of road-tripping reportage, Alexandra Pelosi embarks on a fast-paced cross-country journey, offering snapshots of a cross-section of evangelical America. Pelosi presents her up-close and personal encounters with some influential members of the evangelical community, from Joel Osteen, the most-watched TV minister in America, to Ted Haggard, who recently stepped down as president of the 30-million strong National Association of Evangelicals following allegations that he had sex with a male prostitute and bought illegal drugs.

RSVP at the link above.
Posted by PDiddie at Thursday, August 09, 2007 No comments:

The Nutcracker comes to H-Town


They had to change locations because of the number of RSVPs (over 600). This was the original invite, a rather poor Photoshop: 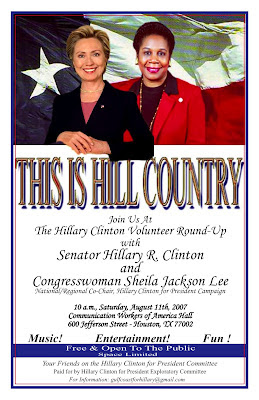 A final word about cheating

Baseball has so mirrored American society at large for the past century that I'm sure a few thousand dissertations have been written about it. I could make a case that Babe Ruth's record is tainted because he didn't play against African-American players. Discrimination, in my humble O, is just another word for cheating: excluding competition by declaration of an arbitrary authority.

Yes, no matter what he says, Barry Bonds cheated. Nobody's head just suddenly grows several hat sizes when they're in their thirties (unless they have some virulent strain of brain cancer). Bonds never hit more than 46 home runs in a season when he was in his twenties.

Bonds also cheated in an era when virtually everybody cheated. McGuire, Canseco, et cetera of course but the lesser players too. Notice how Pudge Rodriguez has shriveled up and become a weak hitter? He literally went from Pudge to Slim in one season. I watched Jeff Bagwell deflate like a poodle balloon, and not just from ceasing his workouts due to the arthritic shoulder. Ken Caminiti became an MVP as a result of the juice, and it also contributed to his demise.

The lords of baseball looked the other way while this was in its heyday. And then suddenly the mostly Caucasian, Christian, Republican fan base started to be turned off by the moral impurity of the Steroids Era. So the Republican owners and executives and managers and coaches and players -- again, for the most part -- were quickly forced to get righteous.

(Prezdential sidebar: I think it's no coincidence that some of the worst cheaters -- Sosa, Palmeiro -- played for the Texas Rangers during the time Bush, the pillar of substance abuse recovery-through-prayer, was part owner.)

Bonds has also cheated in a sport that has condoned -- or at least tolerated -- cheating all of its life. Baseball invented the phrase 'fair play' but the game is played by subjective, interpretive boundaries: Fair or foul? Strike or ball? Safe or out? Depends on the umpire's POV. And yours. No replay camera will ever be used to make that call. "It's right on the line." "That pitch looked outside to me." "Yeah, he's calling a wide zone today." "He beat the throw to first." "No WAY he was out on that bang-bang play."

And baseball has also and always functioned under an unwritten credo: "If you're not cheating, you're not trying." From spitballs with real tobacco juice and Ty Cobbs' sharpened spikes (Cobb likewise being one of the most virulent racists in the history of the game) to corked bats and nail files and sandpaper. Through the generations.

And what are batting gloves and tar paper and body armor on elbows and insteps all about? Aren't they kind of a legalized cheat? So who cares if somebody shot up the horse pills? It's their body. Oh wait a minute: what are the kids going to think?

Baseball was about cheating even before it became all about the money. Then the cheating was kind of, you know, "understandable" when millions of dollars suddenly hit the table. And purity becomes a commodity when not only millions of dollars but the sport as a going concern is threatened. It's Hard Work being Kenesaw Mountain Landis when the owners cancel the World Series -- due to "labor strife" -- and the fan base erodes by 20% for several seasons.

No excuses for Barry, but no admissions of guilt needed from him either. A-Rod is breaking that record anyway in about seven years or so.
Posted by PDiddie at Wednesday, August 08, 2007 No comments:

Barry Bonds set the all-time record for home runs when he hit the 756th of his career off the Washington Nationals' Mike Bacsik in the fifth inning last night.

The new home run king, with his godfather Willie Mays behind him.

Bonds worked a 3-2 count before fouling off the sixth pitch of the at-bat. Barry smacked the seventh pitch a few rows deep in the seats in right center field.

Hank Aaron was not at the game but did give an inspiring message in a pre-taped speech that was broadcast on the Jumbotron after the blast:

"It is a great accomplishment which required skill, longevity and determination.

"Throughout the past century, the home run has held a special place in baseball and I have been privileged to hold this record for 33 of those years. I move over now and offer my best wishes to Barry and his family on this historic achievement.

"My hope today, as it was on that April evening in 1974, is that the achievement of this record will inspire others to chase their own dreams."

Bonds then thanked his father in an emotional speech to the crowd. The game paused for the celebration a total of ten minutes.

It was a nice event to witness in a vacuum, but the controversy surrounding the star will greatly cloud the memory in the minds of many baseball fans.
Posted by PDiddie at Wednesday, August 08, 2007 No comments: