Let's hope Leslie Blitzer dominates the discussion again tomorrow night, because nobody realllly wants to hear the GOP candidates that much.


*snorts, wakes up, looks around*

If Dodd had been more direct about answering the questions he was asked he might have had an even shorter bar. So he stalled.

Biden screamed "Dead! I want him dead! I want his family! Dead!" and appears to have lifted his standing among conservative Democrats who also discovered they like war and tighter bankruptcy provisions and all the other corporate bullshit Joe Biden represents.

According to the Republican pundits on CNN (I'm looking at you, James Carville), Hillary scored points by shooting down the hypotheticals, causing the other candidates to "look to her for leadership". CNN doesn't disclose that Carville is paid for by the Clinton campaign.

Mike Gravel yelled at the kids to get off his lawn, turned ball bearings over in one hand, and mumbled something about stolen strawberries.

Richardson has a Heroes Card and is a pro-growth Democrat.

Kooch, Edwards and Obama answered the questions intelligently and articulately and collectively earned a win; Hillary won by not fumbling anything. Nobody got in anything more than a subtle dig.

Borrrrring.
Posted by PDiddie at Monday, June 04, 2007 No comments:

I played hooky and went to get Senator Kerry to sign his book for me: 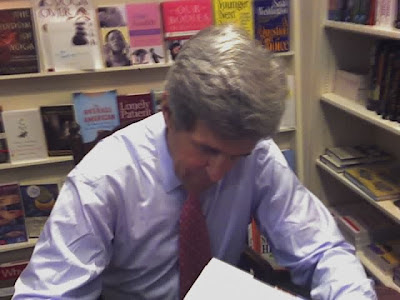 (Sorry Bev, I didn't ask him about Ohio. His book is of course about the environment, and it would have been in poor taste to say: "Do you ever have second thoughts about not asking for a recount in Cuyahoga County?")

Update (6/7): Claudia Feldman was visibly irritated at having to cover the event.

Then I went to the College World Series at Reckling Park:

Rice spanked Prairie View 5-0. There was a large crowd, and Prairie View has some talented athletes -- including the son of former Reds outfielder Bobby Tolan -- but they were overmatched by the pitching and sound fundamentals of the Owls. A two-run home run by centerfielder Tyler Henley in the first inning gave Rice all they would need, but the poor Panthers committed four errors, at least three of them throwing, and two on a single play allowing two runs to score late.

They seemed a little intimidated at the fact they were in the CWS, and playing the #2 nationally ranked team, and they played like it.

When I got back home after being gone all afternoon and evening, Teddi was so excited that she vomited her dinner.

It was an eventful day.
Posted by PDiddie at Saturday, June 02, 2007 No comments: