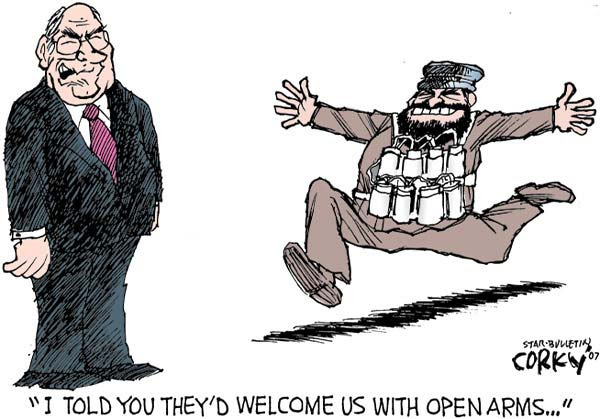 ... while wondering what happened to nobody in particular:

-- I rarely recommend our local right-wing blogs, but this is a great posting for Texas Independence Day.

-- Paul Burka has the latest on Debra Danburg and her recovery from cancer.

--via blogHouston, also mostly never recommended, is some detail from KHOU on the high-rise residential construction boom inside the Loop. Another big one downtown broke ground this week. We're in the market for a new abode, with the addition to our family, and this is precisely the style of living we love. Of course, the whining about mobility from the right is already under way. They don't want anything but more and wider lanes for their SUVs and they don't even want to to pay enough taxes to pay for that.

Really, it's kind of hilarious that people who live in Spring can feel any justification whatsoever in complaining about light rail in Houston. Just stay out there in the suburbs, you hicks.

-- Will we execute child molesters in Texas? Maybe, maybe not. Vince has multiple postings live-logging the debate in the Texas House (scroll down to the HB 8 series). In any case, the law's changes won't affect Jon Matthews, unless he is so sick that he can't stop his sexual predation even after he leaves prison in a few years.

-- The guy in Katy who had the pig races across from the mosque was on the Daily Show, and somehow I missed it. Anybody have a link?
Posted by PDiddie at Friday, March 02, 2007 No comments:

Charles Kuffner made a plausible theory out of Markos Moulitsis' postulate regarding the prospects for dumping Senator Box Turtle. Most everything has already been said already, but here's two more cents' worth:

I'm pretty confident that Bill White would rather run for governor than for anything in Washington except the White House. He's a CEO, not a member of the tribe. And even though they are not usually the kind of Democrats we elect in Deep-In-the-Hearta, there are only a few people mentioned who meet the definition of "people-powered candidate". And of those, Lloyd Doggett is likely the guy Kos has in mind. Doggett has won a statewide race in the not-so-distant past (state Supreme Court) and he's sitting on a pile of money. Doggett would be an excellent candidate and an even better Senator.

Though my very first choice would be Rick Noriega.

Which reminds me that I haven't been as supportive -- online or off -- of Melissa's race for Houston city council as I intended to be.

This woman is a political powerhouse in her own right. She could have easily had the career in public service that her husband has, had that been her choice. There are some people who are just lifted by circumstance to serve, and Melissa is one of those people.

Besides that, we just need to put more women in office across this country. We'd probably have a lot more compassion and a lot less meanness if we did. We'd certainly have fewer wars.

James Rodriguez, with whom I lunched yesterday, is similarly a thoughtful and capable person who is standing for Houston city council. He was quick to point out that there is no such word as 'patrona' in Spanish. I hope to sit down soon with John Marron, who has labor backing and the endorsement of county commissioner Sylvia Garcia. Several heavyweights whose opinions I respect are in support of both men, so this race will be spirited and could be contentious. I don't get a vote in District I, and it's possible that I would endorse two men for the one job. Truth to tell, we need both of them in public service.
Posted by PDiddie at Friday, March 02, 2007 No comments:

A slight case of bloggerrhea

Abbott failed to realize that by issuing this opinion he would hamstring any company or organization that needs daily access to land records. County clerks across the state were presented with the choice of continuing to provide online land record services and garnering a misdemeanor warrant every time someone got access to another person’s personal information through the system that they support, or shutting off public access to their records. So they shut off public access to the records.

It's ridiculously stupid things like this that compelled me to work so hard to defeat him. Texas simply has the worst attorney general money could have bought (and did).

-- Yesterday's "Prevention First!" lobby day at the Capitol was a real treat in a variety of ways: from seeing Alison Bell among our group, to bumping into Kirk Watson getting coffee in the cafeteria (and thanking him for sponsoring the legislation in the Senate), to visiting with Valinda Bolton in the hall between floor sessions. Borris Miles' legislative aide Camille Foster was generous with her time and attention, and Rodney Ellis' staff member Kaitlyn Murphy likewise met a group of over one hundred of his constituents.

And what a difference two years makes. Last time several middle-school girls met with Martha Wong, who was mostly obnoxious and occasionally hostile. This year: Ellen Cohen. How refreshing is that?

BOR has the details of the two bills. Things look good for passage.

-- Today Teddi goes back to the vet for another round of shots and this evening is her first day of school (obedience training). I'll also have a bloglunch with James Rodriguez, who's running for Houston city council, and then go to a Kucinich Meetup tonight. We'll be among several hundred people greeting him in San Antonio next weekend as he keynotes the annual meeting of the Texas Progressive Populist Caucus. This weekend, the DFA Training Academy comes to Houston. I'll be assisting.
Posted by PDiddie at Thursday, March 01, 2007 No comments: