How does my ass look? 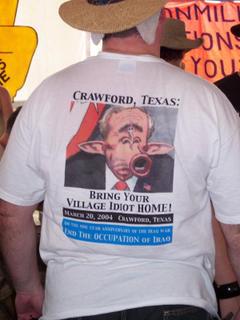 Up even earlier than usual

...in order to leave for Crawford and Camp Casey in about an hour.

Words and pictures about today will appear here tomorrow.
Posted by PDiddie at Saturday, August 27, 2005 No comments:

What is Tom DeLay doing now? 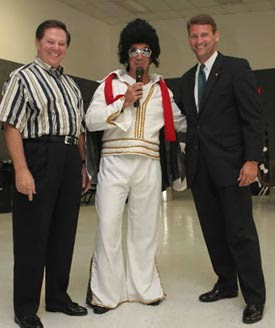 He's posing with Elvis at a nursing home -- err, campaigning in his district.

Go read this absolutely hilarious post at In the Pink Texas.

Their snark, and that of their commenters, is the best ever of late.

with Christopher Hitchens is now available for your viewing at Crooks and Liars.

You've heard it about it, you've read about it, now you can see it for yourself.

Prairie Weather links to the Texas Observer's in-depth expose' of the tangled web of connections binding the GOP together -- that's a must-click, by the way -- and adds this:

This is a big article about a big mess and these are only the opening paragraphs.

Bottom line: a real investigation, which McCain and the Indian Affairs Committee is supposed to hold, would pull down too many "key" figures in the Republican Party and (worse?) cut off big funding sources.

Now are we motivated to change the color of the Senate and House in 2006?

Well, if we are, we shouldn't count on any help from the SCLM; Editor and Publisher points to the Los Angeles Times piece that shows how the editors of TIME magazine sat on the Plame-Rove-Matthew Cooper disclosures because they did not want to influence the 2004 election:


That worked out well for everyone, didn't it?