But still no time for anything but an assembly.

-- Trey's rant about the Lone Star media was... okay.  I don't understand how anybody can call me vulgar after that, but all of McB's drunken-sailor-ishness doesn't detract (much) from his point: that the people covering politics in Texas day to day are simply a weak bunch, and especially from a historical perspective.  That isn't going to change, and if the Davis campaign is looking for a break... that ain't happening either.

The Texas Tribune apparently represents the best that it's going to get, and they are consumed with the horse-race aspect while at the same time advancing the usual false equivalencies that are by now just lazy and sloppy.  Click here, and then compare the headline to what you read in the address bar (the former headline, I presume).  And Charles Kuffner is absolutely correct: the next time you see "Mark Jones" in a story on Texas politics, just stop reading.

But the bottom line for Wendy Davis remains the same: her campaign is going to have to make something happen and stop reacting to what's happening.

-- I thought that Gadfly one-upped me with this.

Greg Abbott wouldn't want the political correctness police to treat his candidacy with kid gloves related to his physical handicap limitations, now would he?

We know that a good conservative like Texas Attorney General Greg Abbott would never, ever succumb to political correctness, now, would he?

Of course not. A rugged individualist hombre who can shoot thousand upon thousands of clay pigeons with a powerful 12-gauge loaded with double-aught buckshot a light, likely multi-round chambered 20-gauge shotgun with barely-more-than-blanks skeet loads surely doesn't need the support of librul buzz words, coded phrases and mollycoddling language, does he?


"Stand Up, Stand Up for Jesus", indeed.  I remember singing that in church when I was a kid. 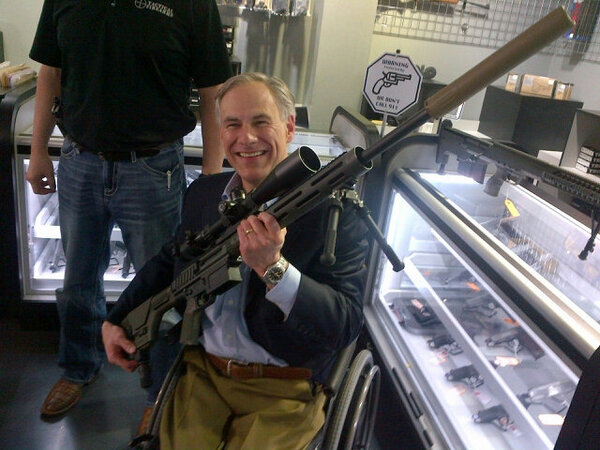 I wonder how Greg Abbott feels when he sings it.  To have to live with the fact that he can't, I mean.  Does that foster shame, or embarrassment, or some kind of putrid self-hatred?  Can you get counseling to deal with it?  It's probably covered by Obamacare, but not Medicaid, even under the terms of expansion that General AbouttheSame has no more intention of accepting than Governor Goodhair.

Neither of them should ever have to worry about being on Medicaid, after all.

-- Some Republicans have started an anti-Nathan Hecht campaign.  There's a Twitter account as well.  If you want something a little more serious -- and not seriously stupid all the time -- with your Texas Supreme Court campaign soup, then head on over and read John Coppedge at QR.  Excerpt complete with Harvey Kronberg's typical oddball emphasis.

It is no secret that Houston mega-lawyer Mark Lanier is not a fan of the current court. What is noteworthy is that a look at the most recent Texas Ethics Commission reports of the three challengers to Hecht, Brown and Johnson shows that they have collected $61,100 in total. And 98% of that came from members of the Lanier firm. (Mark Lanier and 10 lawyers in his firm have contributed $60,000). He and his firm seem to be leading the charge. It remains to be seen if others will follow.

If the personal injury bar follows Lanier's lead this cycle, they will contribute handsomely to the campaigns of the three challengers. But so far, they are laying behind the log. And notably some are supporting the incumbents. In past campaigns, the trial lawyer contributions came primarily after the "30 Day Report", thus shielding them from public view until just a few days before the election. And the dollar amounts have been staggering.


More if you have a subscription.

-- Just so we're clear: the underling at MSNBC that got fired over a Tweet about the right-wing acting all indignant about a Super Bowl commercial (you know, the one Phil Griffin apologized to Reince Priebus for) just had the wrong Super Bowl commercial in mind.  You think Griffin will hire that person back?  Since they were correct about the right-wing reaction, that is?

Still way behind on events past and future.  I wanted to blog about all of the Keystone XL developments and #NoKXL rallies yesterday, and even about Louie Mueller Barbecue in town on Super Bowl Sunday (I went, it was great) and coming to Houston permanently soon, but there aren't enough hours in the day.  I'll get a round tuit eventually.
Posted by PDiddie at Tuesday, February 04, 2014

I "blame" you for inspiring me to do that.

"I guess we can't talking about Abbott having legal standing when he sues Obama, can we?"