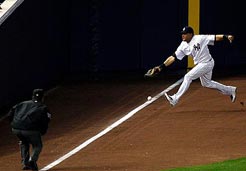 On Friday night, a bad call might have cost the Minnesota Twins a chance to beat the New York Yankees on the road in their American League Division Series. In the 11th inning of Game 2, Minnesota catcher Joe Mauer sliced a ball down the left-field line that not only glanced off Melky Cabrera’s glove in fair territory but also bounced at least 6 inches inside the line and then into the stands for what should’ve been a ground-rule double. Umpire Phil Cuzzi, standing 10 feet away, called it foul. (See photo above.) And even though Mauer singled and the Twins managed to load the bases with no outs, they didn’t score, and the Yankees won 4-3 on a Mark Teixeira home run later that inning.

The Twins were here, of course, because of an umpiring error earlier in the week. A pitch glanced off the jersey of Detroit third baseman Brandon Inge with the bases loaded in the 12th inning of the Tigers’ one-game playoff with Minnesota. Umpire Randy Marsh didn’t call it. The Twins scored in the bottom half of the inning. Marsh claimed not to have seen the video, and MLB’s umpiring boss, Mike Port, said he stood by Marsh.

A pair of bad calls, one completely hideous, as all after-the-fact evidence easily reveals.

So that’s what baseball has come to: supporting egregious flubs to protect their own. It’s the epitome of an old-boys’ network, and it’s insulting to the game. MLB says it uses a grading system during the regular season that rewards the best umpires with playoff assignments. That alleged fair and impartial grading system, mind you, rewarded a postseason series to C.B. Bucknor, about whom a player once said: “My grandpa would be a better umpire than him. And my grandpa is dead.”

Bucknor, by the way, blew three calls at first base in Game 1 of the Red Sox-Angels series. Bungling one call is bad. Mangling two is unconscionable. Blowing three in a single game is fireable.

All of this, again, has happened within a half a week’s time. Two game-defining calls and three more that could have led to … well, no one knows. That’s a wall MLB hides behind: that even if Mauer were on second, who’s to say Jason Kubel and Michael Cuddyer would’ve followed with singles?

Baseball has to start getting these right.

Technology exists to ensure that such errors are rectified before they cost a team. If Cuzzi is willing to admit he’s wrong after the game – “There’s a guy sitting over in the umpire’s dressing room right now that feels horrible,” crew chief Tim Tschida said – then it behooves him and others to allow their calls to be vetted in-game. In no way does it subvert their authority. Players will respect their fallibility, a grand quality for so many who try to play god.

Take the cue from football. Use a red replay flag. Each team gets two per game. If the manager throws them too early, or misuses them, and can’t overturn a poor call later, it’s his mess. ... Accompanying the technology is the urgency. Nobody inside baseball wants a postseason defined by its umpiring screw-ups, and yet year after year, they happen. Ignoring the issue won’t make it go away.

Watch for the next blown call, and whether the outrage is sufficient to drive baseball out of the 19th century and into the 21st. Next season. Perhaps.

The human element. That’s the best argument purists muster against widespread instant replay in Major League Baseball. Let’s see how that works: Umpires make mistakes because they’re human, and ... that makes it OK! Somehow, it’s difficult to believe such reasoning would stand up in a court of law or, say, anywhere in the world not populated by baseball’s dopey decision makers who don’t understand that a huge integrity problem is about to smack them in the face.