The Texas progressives in the 2018 Democratic primary

And dishonorable mention for some that are not, and those that are in camoflage.  This is a first pass; I need to do more research for a fuller slate.  With so many Democrats to choose from in next year's primary elections -- and with the presumption that holding my vote back for a Green ballot petition drive that is unlikely to be successful -- my focus is turning to candidates I can cast a vote for (and not the many against, since we don't have a real NOTA option beyond an undervote).

Update: DBC Green provides an update on the status of a couple of Green Party candidates (one planning to run as an indie) and ballot access requirements.

Notice the heavy use of the first person pronouns in the above.  This is my list of progressive candidates and you're welcome to it.  YMMV, and if it does, let me hear how and why in the comments.

For US Senate: Sema Hernandez.

As regular readers know, Beto O'Rourke has consistently disappointed me (scroll to the end) with his mush-mouth on universal single payer.  Saying 'health care is a human right', but calling for everyone to pay in, and holding out on the Medicare for All bill because it does not give a role to for-profit hospitals is simply too duplicitous on my most important issue to earn my support.

Hernandez, by contrast, checks all the boxes.  If I had gotten on the ball I would have advanced her appearance with the Independent Outsider progressive radio folks Dave Denton, Holly Seeliger (blogging as Zoon Politikon) and Stevie "Redneckonomics" King this past Monday.  Thanks to the miracle of Net Neutrality, you can still view that interview below.  There is a noticeable lack of professional expertise in that broadcast that people like Kuffner -- who hadn't heard of Sema before he checked the Brazoria County Dems page last week, despite her long and very active Facebook and Twitter presence -- are just going to have to get over. 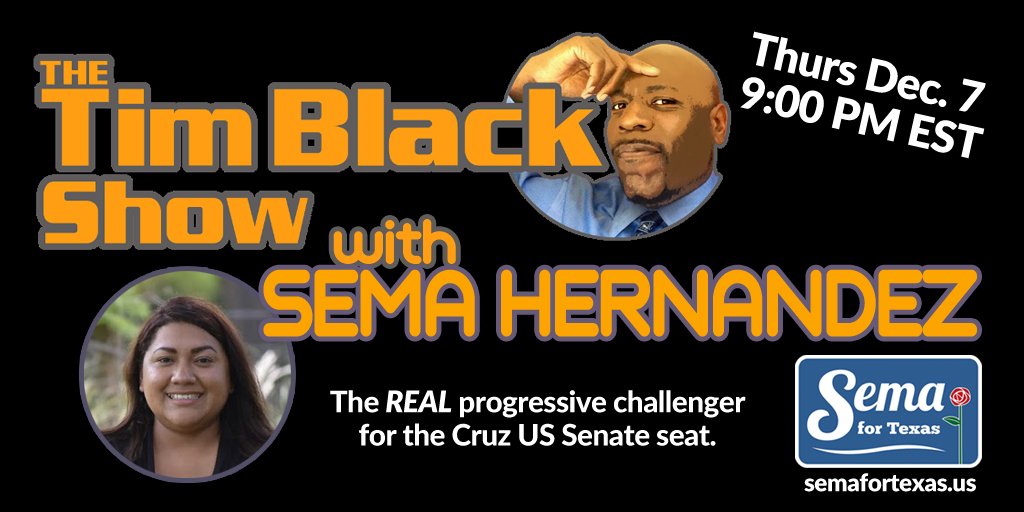 She's more Democratic Socialist than you usually find running for office in Texas, and thank Doorknob for that.  She is, in fact, the kind of Democrat that led the way in victories for the Democratic Party just a month ago.  Sema needs your help raising the $$$ for the filing fee to get on the ballot with less than a week remaining.  As with all citizen activist progressives, a few dollars goes a long way toward a much, much better government.

Back in July I suggested that Texas Democrats abandon this line in favor of a Joe Straus independent run for the Mansion.  Neither party to that suggestion took my (admittedly sarcastic) bait, but I knew I would be okay with "Bernie Sanders in a cowboy Panama hat".  Wakely is a reincarnation of my favorite Texas politico ever, David Van Os.

That ought to be enough to make plenty of centrist Donkeys curl their lip and vote for Andrew White, I suppose, especially if Lupe Valdez does not enter the race.  *Update: She is rumored, again, to do so this morning.

Contrary to some accounts, Jeffery Payne (aka Mister International Leather) was not the first candidate to file that was 'considered newsworthy'.  This is just another diss from a card-carrying establishment douchebag.  Here's Wakely's latest at Down With Tyranny. 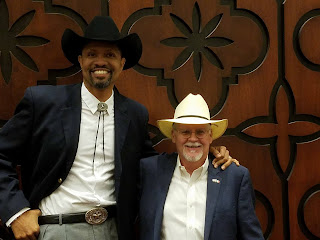 Mike Collier, who ran for state comptroller and lost to Glenn Hegar in 2014, voted for Mitt Romney in the 2012 GOP primary, and is the kind of business-oriented former Republican some Democrats think they need to focus on to win elections, especially in Deep-In-The-Hearta.  I'm obviously not one of those people.

African American Texas Democrats will turn out for Cooper and the rest of the ticket, but will do what they did in 2016 with a Caucasian centrist at the top of the ballot: take a pass on voting.  Cooper is running in tandem with Wakely, has an active Twitter feed and Facebook page, but has let his website, linked above, lapse as of this posting.  He campaigned with Wakely in East Texas just this past weekend, so I'll take it that his webmaster simply dropped the ball.  I'm dubious it's a sign of wavering commitment to the race, after announcing his run back in May and having filed on November 11, the first day of the period.

She might not be as progressive as, say, Hank Gilbert, but nobody could be as terrible as the incumbent, Sid Miller, or his GOP challenger, Trey Blocker.  That may sound like a left-handed compliment, but it isn't.  Olson is well-qualified in a race Texas Democrats, at this early point in the cycle, stands the best chance of winning.  JMHO.

Even if Lupe Valdez decides not to run for governor, Texas Latin@s have a load of good candidates running for office, and McAllen is one.  I'm on my soapbox to say that they should be doing the heavy lifting NOW to show their support.  With the repeal of ACA and DACA, "build the wall" and other hot-button issues waiting for them to weigh in on, 2018 is a no-excuses year for Latino turnout.

Alex T isn't on board with single payer and neither is Lizzie Fletcher (weakest website ever for a candidate of her stature), so they're both non-starters for me before you even get to their establishment cred -- the mega-money raised, the well-connected endorsements.  Westin is apparently losing the charisma contest to everybody but Cargas and Josh Butler.  Westin is much stronger on single-payer than Moser, who uses the non-specific phrase "access to health care" on her website a little too much for my taste.  This is Beto O'Rourke's path, right down to the "healthcare is a human right" pablum.

Down With Tyranny likes Westin.  But the doctor loses me when he says things like 'a race to the left is one nobody can win', as he reportedly did in a recent candidate forum.  He describes himself as a moderate (see the WaPo link at the end of this graf) on most issues except healthcare.  That's two dogwhistles to centrist Democrats -- not to mention Sarah Davis/Joe Straus Republicans -- who wouldn't be likely to support a general election progressive, a premise which has been verifiably field-tested since 2008.  As a reminder ...

Based on data from the 2008 Cooperative Campaign Analysis Project, a YouGov survey that also interviewed respondents multiple times during the campaign, 24 percent of people who supported Clinton in the primary as of March 2008 then reported voting for McCain in the general election.

An analysis of a different 2008 survey by the political scientists Michael Henderson, Sunshine Hillygus and Trevor Thompson produced a similar estimate: 25 percent. (Unsurprisingly, Clinton voters who supported McCain were more likely to have negative views of African Americans, relative to those who supported Obama.)


For those who can't be bothered to click over, the nut graf is: two to three times as many PUMAs bagged on Obama in '08 than Sandernistas did Hillary in 2016.  I would expect nothing less in 2020 if Bernie Sanders becomes the nominee.

But that's a digression.  It's either Moser or Westin, and it may come down to a coin flip.

Update: Ivan Sanchez, formerly president of Houston Millennials, was the last to file for this race on the deadline.  Nothing on issues on his Facebook page, nor his Twitter and Instagram activity.  Should be interesting to see if he can get any traction over the next three months in such a crowded, high-profile field.

I've already posted about him, so I'm not "basically everyone".  This Tweet from the young schoolteacher says it all.


At a meeting about the San Jacinto Superfund Site. Gene Green and Sylvia Garcia decided this wasn’t worth their time tonight. Our community is hurting and we cannot allow corporation to continue polluting for the sake of “good paying jobs”. They’re killing us. #MoralesTX29
— Morales for Congress (@MoralesTX29) December 5, 2017


More to come on Lina Hidalgo, Adrian Garcia, and others.
Posted by PDiddie at Wednesday, December 06, 2017 3 comments:

The Texas Progressive Alliance wishes everyone Treason's Greetings with this week's roundup.

Off the Kuff is doing his best to keep up with filing news.

Egberto Willies wants us all to be on the streets and more engaged in combating the Republican tax cut scam.

Texas Leftist also blogged about the #GOPTaxScam that was ultimately passed by the Senate in the wee hours last Saturday morning.

Dallas County Sheriff Lupe Valdez had a false start to her gubernatorial campaign last week, and once her bid for the Governor's Mansion is official, it will help carry a lot of downballot Democrats to victory, writes PDiddie at Brains and Eggs.

Harry Hamid attended the Harris County Green Party's recent monthly meeting but was forced to stage an unintended walkout, and David Collins went to a community gathering about a sports bar's traffic issues instead of attending the same GP assembly.  Both bloggers used the word 'toxic' in their posts to describe their attendance (or lack thereof).  Perhaps the party's leaders will catch a clue.

Neil at All People Have Value suggested that personhood be taken away from human beings and extended to guns and bullets instead. APHV is part of NeilAquino.com.

jobsanger has a bar graph that shows the minimum wage in every state, and uses it to illustrate how that is not a living wage.

And the Lewisville Texan Journal passes along the details of that city's annual holiday pet adoption event, Santa Paws Village, being held this coming Saturday.

Houston Public Media links to ProPublica's investigation of current and former military installations across the United States (more than 60 in Texas) contaminated by hazardous waste.  One of the worst sits roughly 15 miles east of downtown Houston. In an aggregate of 2018 filing developments, a former Monsanto lobbyist is challenging Ag Commish Sid "Sharia Law" Miller in the GOP primary, and Christopher Collins at the Texas Observer sees both men pandering as hard as they can to freak Republican base voters.  In the wake of Joe Barton's somewhat involuntary retirement, the FWST was on the scene as his former chief of staff filed to replace him in Congress.  (The several other Republicans and Democrats vying for TX-6 are also mentioned.)  And the TexTrib has news about former state Representative Trey Martinez Fischer, who wants his old seat in the Texas House back.  He's running against Rep. Diana Arévalo in the Democratic primary for HD-116 (San Antonio).

Grits for Breakfast wonders what happens next after the latest details of the Texas Juvenile Justice Department's sexual abuse of child prisoners at the Gainesville State School have been made public.

Therese Odell at Foolish Watcher reacts to the Matt Lauer news and the reaction to the Lauer news by Donald Trump.

The Lunch Tray asks you to comment on USDA school nutrition standards.

The TSTA Blog keeps pushing back against school privatization untruths.

Keep Austin Wonky offers his proposal for a 2018 City of Austin infrastructure bond.

And Ty Clevenger at Lawflog reports on the federal death row inmate who is appealing his sentence, hopeful to receive a hearing from a judge who is not drunk.
Posted by PDiddie at Monday, December 04, 2017 No comments:

Sunday Afternoon 'Lock Him Up' Funnies 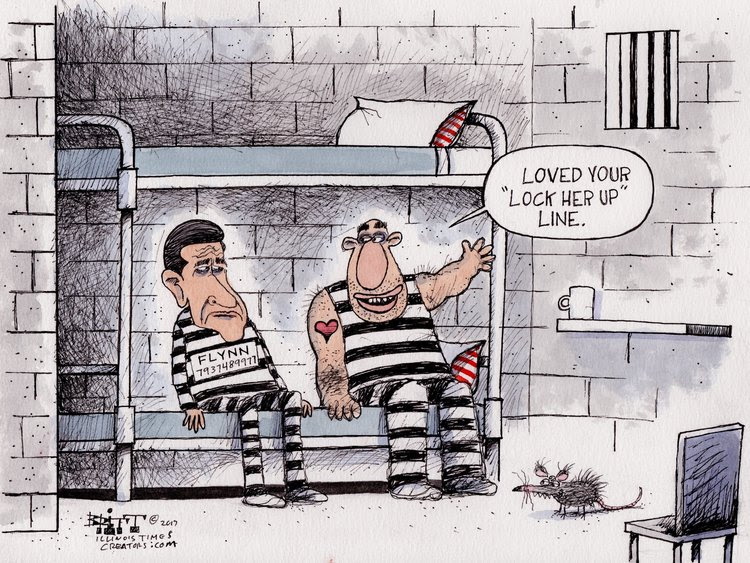 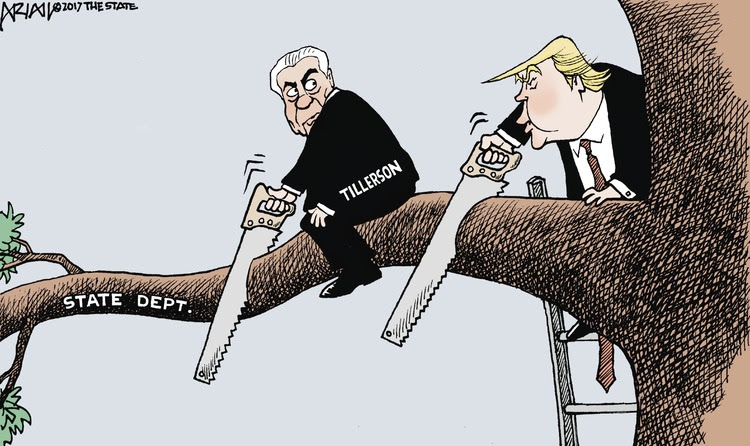 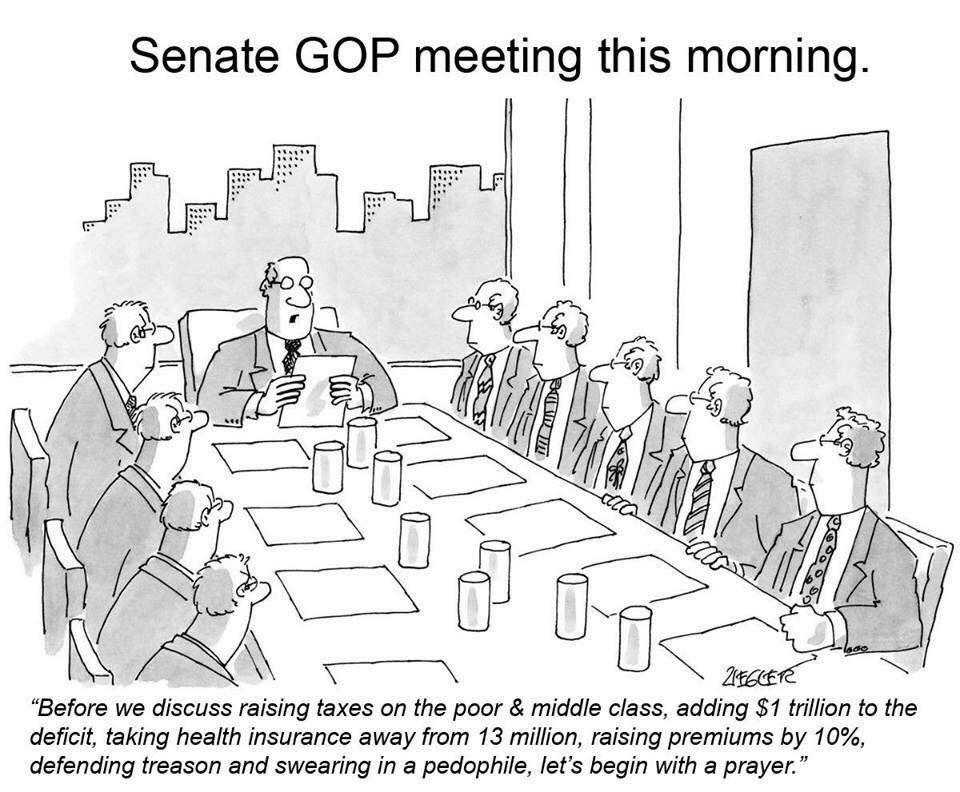