"Fragments that reflected her own thinking"

I was more impressed, frankly, when Melania Rickrolled herself.

I'm sure he'll never run around or "dessert" us, either.

The hashtag #FamousMelaniaTrumpQuotes trended on Tuesday as the world reacted to a keynote address by Donald Trump's wife that sounded almost identical to Michelle Obama's 2008 Democratic convention speech.

My favorite?  "It was a little cocker spaniel dog... and our little girl -- Tricia, the 6-year-old -- named it Checkers."

This managed to overwhelm Rick Perry's praise of the cancer of Trumpism, Steve King's white supremacy theory, Rudy Giuliani's screaming, and the brief rebellion by the #NeverTrump faction, quickly and parliamentarily silenced.

Outside the Q, please meet the West Ohio Minutemen.

As they walked the streets of Cleveland, the militiamen chatted with cops who simply told them to be safe. Texas delegates fresh from the convention cheered them on. And they told (VICE photographer Peter) Larson about their mission, which they said had nothing to do with Donald Trump or even the Republican Party. Instead, the group told him they were dedicated to protecting and supporting their community and did not discriminate against race, sex, gender, or anything else.

This has to be less horrible than last night, no?

He violated the Hatch Act. 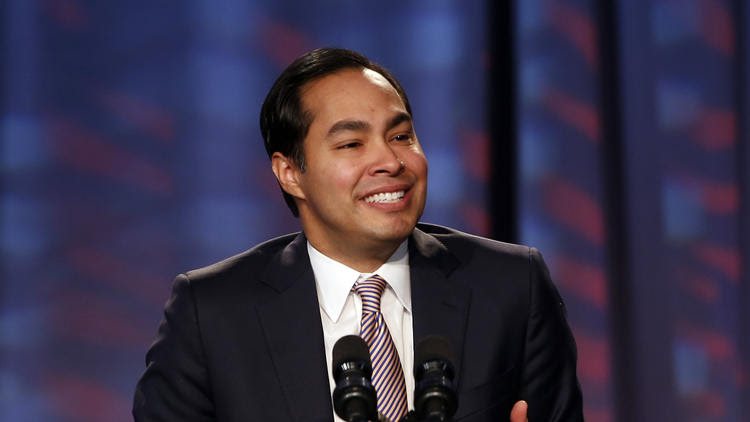 A U.S. Office of Special Counsel report released Monday found that Housing and Urban Development Secretary Julián Castro violated the Hatch Act, which restricts the political activity of some federal employees, during an April interview with Yahoo News.

Castro's statements during the interview, according to a OSC news release, mixed his "personal political views with officials agency business despite his efforts to clarify that some answers were being given in his personal capacity." The department found he violated the act by "advocating for and against presidential candidates while giving a media interview in his official capacity on April 4, 2016," the report states.

The Hatch Act, passed in 1939, prohibits employees from using their official authority or influence to affect the outcome of an election, according to the report. The OSC submitted the report and Castro's response to President Barack Obama for "appropriate action."

Castro has the right to appeal the violation and faces disciplinary action including "removal, reduction in grade, debarment from federal employment for a period not to exceed five years, suspension or reprimand" and faces a fine up to $1,000, according to federal law.

In the April interview, the former San Antonio mayor, who is reportedly being vetted to be Hillary Clinton's vice president, tells Katie Couric, "Now, taking off my HUD hat for a second and speaking individually, it is very clear that Hillary Clinton is the most experienced, thoughtful and prepared candidate for president that we have this year."


I've encountered few people in my decade of Democratic politics just concluded who have acted more cautious and self-centered about their political future and viability than the Castros.  To say that this takes him out of the running for veep is an understatement.  He may have ruined all of his future prospects with this fumble.  Clinton is campaigning in in Florida this Friday and Saturday, and that's allegedly when she will be making her choice for running mate.

So it's going to be Tim Kaine, I now suspect.  That's about as lousy as can be for progressives ... unless she picks John Lickenhooper, that is.  Kaine's weak enough, but "Clinton-Hickenlooper" would be one crappy bumper sticker, not to mention ticket.
Posted by PDiddie at Monday, July 18, 2016 1 comment:

Chachi audibles for Tebow at RNC

Everybody knew that the Prayin' Quarterback was a lousy football player, but this is a humiliation even he couldn't have imagined. 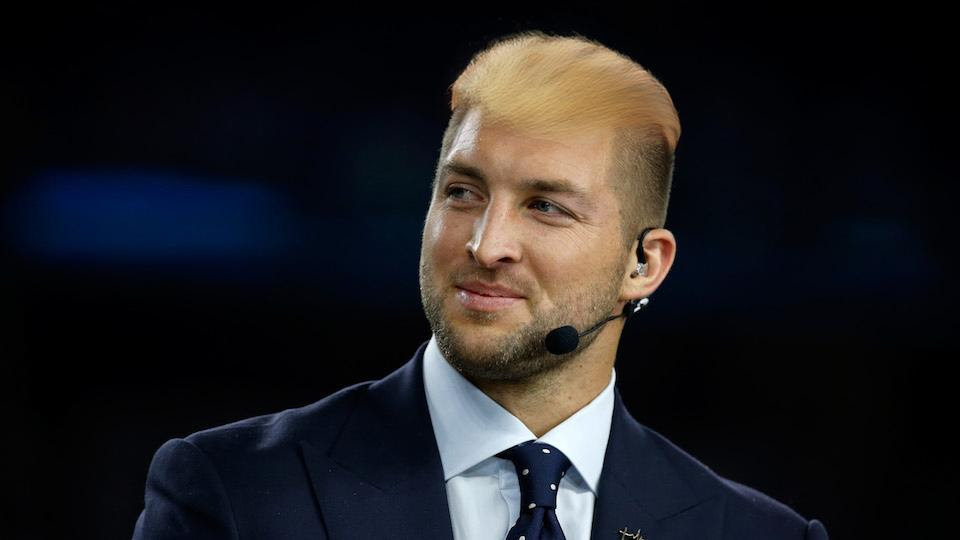 (Former NFL mostly-tight-end Tim) Tebow ... quickly distanced himself from the GOP proceedings in Cleveland, taking to Facebook and Instagram to post a video in which he explained that his reported appearance was a misunderstanding in the most magnanimous way possible.

“What’s up, everybody?” Tebow cheerfully greeted a video audience of around 1.1 million (and counting) on the social media platforms. “I just got back from the Philippines, and I wake up this morning to find out that I’m speaking at the Republican National Convention.

“It’s amazing how fast rumors fly, and that’s exactly what it is—a rumor.”


It's a shame he wasn't tapped VP, wasn't it?  Probably coulda carried Florida.  I want to know what happened to Dennis Miller?  Or Jon Voight?  Or Gene Simmons?  Or Ted Nugent, for crine out loud?  Okay, put in Chachi.

(Sitcom teevee has-been Scott) Baio, best known for his work on “Happy Days” and “Charles in Charge,” is one of Hollywood’s best-known Republicans, but he was still floored by The Donald’s offer to speak on Cleveland’s big stage.

Baio, 55, is among several unconventional convention speakers in Monday night’s lineup.  He will follow a speech by Willie Robertson, star of A&E’s “Duck Dynasty” reality show. ... soap opera star Antonio Sabato Jr. — a veteran of “General Hospital” and “The Bold and the Beautiful” — will also take the stage.


I won't be watching but I will be Tweeting.

Update: "Who is Scott Baio and why do baby boomers care that he's speaking for Trump?"

I wasn’t alive when Happy Days aired, but I watched reruns on Nick at Nite and I don’t remember this character.


AHAHAHAHAHAHAHA
Posted by PDiddie at Monday, July 18, 2016 No comments:

The Texas Progressive Alliance urges the people of Cleveland to stay strong as it brings you this week's blog post roundup. 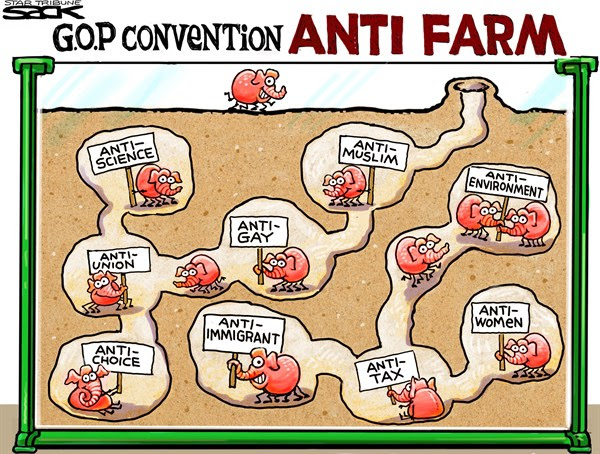 Off the Kuff notes that even white people don't much like Donald Trump.

A prediction PDiddie at Brains and Eggs made about the outcome of the SD-13 special election to replace Rodney Ellis was dead on.

The Lewisville Texan Journal reports that Army Corps of Engineers has chosen not to issue an environmental impact statement regarding the improvements being studied to the Lewisville Dam.

John Coby at Bay Area Houston laments the 19% of Latinos who have boarded the Trump Train.

Following the developments in the prosecution of Chris "Frack Master" Faulkner, Txsharon at Bluedaze posted the FBI's seizure of his Bentley and Aston Martin.

Neil at All People Have Value spoke to a longtime friend on the phone over the past week. Neil says longtime relationships add a great deal of meaning to life. APHV is part of NeilAquino.com.

The Houston Press sees Dan Patrick as the stand-in for Greg Abbott at "Trumpfest", the GOP convention opening this week.

Equality Texas advances the FairnessUSA spot that will air during the last night of the RNC depicting transgender discrimination, and has an extended version of it posted.

Grits for Breakfast examines the reasons why more Texans are being shot by police, and also dissects that Harvard study purporting to show racial bias does not exist in police shootings.

Jay Blazek Crossley notes that in 2016, transportation decision-making bodies in the state of Texas continue to be overwhelmingly dominated by older white men.

Paul Woodruff ponders the ethical implications of using a robot to kill the Dallas sniper.

Juanita Jean wades into the Donald Trump-RBG war of words.

Kyle Shelton delves into the history of taking protest to the streets.

Kiko Martinez looks at Elena of Avalor, the first Latina princess from the Disney machine.

Lone Star Ma recommends a few books for people who would like to be less ignorant on racial matters.

Doyen Oyeniyi reminds the lieutenant governor that his words matter, too.

And Pages of Victory helped out a neighbor while she was on vacation.
Posted by PDiddie at Monday, July 18, 2016 No comments: