The Day Before Wrangle

The Texas Progressive Alliance fervently hopes that all of the election winners have our state's best interests at heart as we bring you this week's roundup.

Off the Kuff discusses what the Republicans didn't tell us about voter ID, and the bigger question about it that has yet to be decided.

Libby Shaw, writing for Texas Kaos and Daily Kos, notes that when fascism comes to America it will come wrapped in a law that should have never been passed in the first place. I will not sit down and shut up about voter suppression in Texas.

WCNews at Eye on Williamson sees that the photo ID law in Texas is causing problems. Considering it's always been a solution in search of a problem this is no surprise: TX GOP Voter ID Law Denied 93-Year-Old Veteran A Ballot.

Control of the US Senate will be decided in a runoff in Louisiana in December, or maybe in January in Georgia. So sayeth PDiddie at Brains and Eggs.

Egberto Willies has the video of Mary Landrieu telling the truth that's hard to swallow for Southerners.

Neil at All People Have Value thanks his car for reaching 100,000 miles and everyone and everything else for just being here.  APHV is one of many things that exist at NeilAquino.com.

Texas Leftist picked up on the Republican candidate for Dallas County Judge's comments that he hopes Democrats will spend their food stamp money instead of voting on Tuesday.

Greg Wythe's last number crunch before Election Day reveals a Harris County Democratic electorate between 46 and 47%.  It's all on Tuesday's voters now.

The alternative newspaper Free Press Houston made its first endorsement ever, and it's for Kim Ogg for District Attorney.  Because weed.

Lone Star Ma was blockwalking to the end.

Lone Star Q has the report that the Houston hate rally's Twitter hashtag, #IStandSunday, backfired on them.  It became a rallying cry for LGBT rights.

The Great God Pan Is Dead explains the activism of Working Artists and the Greater Economy (W.A.G.E.), who advocate for paying artists fairly for their labor.

The Texas Election Law Blog reports on the "sub-rosa approval" of veterans health cards as suitable for voter ID.

Colin Strother asks if you know who your voters are.

Grits for Breakfast notes the appellate court split on the mandated DWI blood drawing, and what that means as the cases move on to the Texas Court of Criminal Appeals.

Scott Braddock discusses the new (and likely to be short-lived) "dark money" rules.

The Lunch Tray reminds us that in terms of what they eat, every day is like Halloween for American kids.
Posted by PDiddie at Monday, November 03, 2014 No comments:

Just don't fall too far back. 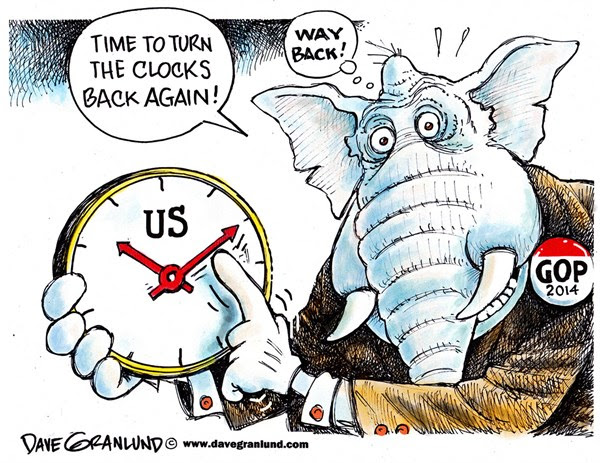 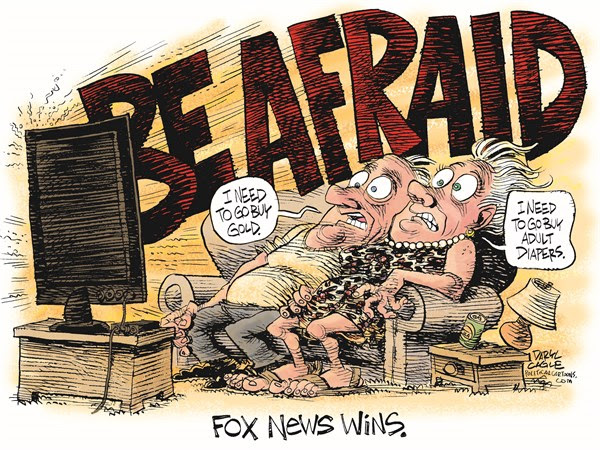 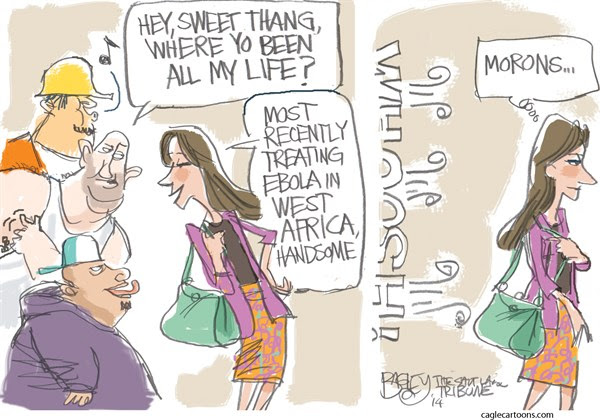 Some statewide and local prognostications

While we wait for Charles to weigh in, take the election quiz Gail Collins has going on over at the NYT.  I scored six out of eight.

Update (11/2): Kuff is up, a little more optimistic than me (not a bad thing, since he knows the numbers best).  Note particularly where we differ on the Texas House.

This late development with respect to how Battleground Texas has made a mistake in their evaluation of statewide turnout isn't that big a surprise to me, frankly.

In its memo, a copy of which is posted on The Texas Tribune website, Battleground indicated that 1,092,006 Texans in the 70 largest counties turned out to vote through the 10th day of early voting in 2010. But figures from the Secretary of State's website show more voters — 1,283,229 to be exact — had turned out in just the 15 largest counties over the same period.

Using the lower baseline from 2010 produced a seeming 36 percent jump in the number of people showing up to vote, astronomically higher than the turnout rate in the 15 largest counties being tracked on the secretary of state's website.

Those figures show 1,291,393 voted through Wednesday, an increase of .6 percent, or 8,164 people. Because the state has grown and added more voters to the rolls, the turnout rate has gone down so far in those counties. It was down 6.6 percent as of Wednesday and slightly more, or 7.2 percent, as of Thursday.


I thought they were being a little sunny in their outlook, and it's a shame for the political career of the person(s) who screwed it up, but it didn't really impact my long-range view of how the races were going; I had been taking it as blue spin.  Karl-Thomas Musselman did a better job evaluating early turnout; here is his spreadsheet.  The bottom line: it's ever-so-slightly down from 2010... which may not be a terrible thing, considering how red the turnout was in 2010.  But the takeaway is that BGTX's efforts in executing Democratic voter registration and turnout appear to have tread water.  That's unfortunate for them but considerably more unfortunate for everyone who isn't a conservative Texas Republican (which is very probably most Texans, irrespective of whether they  vote or do not).

Outside of the EV numbers, heavy rain is forecast for much of Texas on Election Day.

Certain governor's races elsewhere in the country -- Scott Walker versus Mary Burke in Wisconsin, Rick Scott versus Charlie Crist in Florida -- are going to be much closer, and probably more enthusing, than ours in Texas.  I'm going with a 9-point victory for Wheels, 53-44 with 2 for Kathie Glass and something under 1% for Brandon Parmer and whomever else is on the ballot as a write-in.  Update: Davis' postmortems have begun.

That's progress, I suppose.  It won't be that close for the other Democrats down the ballot, unfortunately.  Something on a 55- 42 range, with some deviation in the Agriculture Commissioner's race, where I expect Kenneth Kendrick to pull Jim Hogan under 40 with about 5-6% of the total.  Could be a point or two higher than that.  May crowd ten percent, based on his strong (for a Green in a statewide race with a D on the line) polling.  Similarly, Emily Sanchez could very well get to her polling number (5%) in the US Senate race.

No Democrats I have spoken to wanted to say so -- even privately, because he's so wealthy and might help other Dems with big checks -- but David Alameel was one of the weakest candidates on the ballot.  Not as weak as Hogan, and not as weak as all of the ones (in all parties, mind you) who ran no kind of campaign whatsoever, but weak nonetheless.

So unless I and everyone else will be stunned with a Taser on Election Night as the returns roll in, here's what I see with respect to our beloved Texas:

-- The Texas House gets a little redder, something on the order of two or three seats.  I can't call it between Susan Criss and Wayne Faircloth; it's just too close.  In Wendy Davis' old Senate seat, Libby Willis, the D, will hold off the R Konni Burton, leaving things as they were in the Texas Senate.  With the notable exception of all the extremist Republicans replacing the moderate ones.

-- In Texas Congressional seats, there will be no changes.  Pete Gallegos hangs on, and everybody else holds their place.  This is what redistricting hath wrought, as The Daily Show reminded us this past week.

-- Harris County, by Greg Wythe's Clarity algorithm (he didn't invent it but did utilize it on the local early voting numbers for our interpretation), suggests that many Republicans are going to win at the courthouse with something on the order of 54-46... based on his calculation of the earlies.  That closes the 2010 gap, of course; just not by enough.  Local Republicans are nervous, but I don't think they have much reason to be.  They're just trying to scare out what remains of their vote.  That's also what the big hate rally on Sunday is all about.  Lone Star Q has the details on the responses to that.

Update: Greg's latest.  Strong turnout on Election Day -- probably in the pouring rain -- is the last chance for the local blue team to get over the hump.

Will the Harris DA race between Kim Ogg and Devon Anderson be the exception to this rule?  Too close for me to call.  A lot of Republicans seem to be in opposition to Anderson.  How many and how that translates at the ballot box remains to be seen.

More if it breaks late, and as I am still serving EVBB on Election Day, blog postings and Tweets and Facebook updates that are intended to sway or influence people and their votes are not going to appear.

So take everything I say with a grain of salt.  You know, as usual.

Update: Socratic Gadfly, a little more caustic than me.
Posted by PDiddie at Saturday, November 01, 2014 1 comment:

The Senate will be decided in a runoff in December

I wrote this post, re-wrote it, searched for and embedded links and then deleted them, waited as long as I could for late polling and I still can't predict with great confidence how it will wind up.  So I'm going with the most thrilling finish.  Reuters has the best summary, and they laid it out five days ago.

The fight for control of the U.S. Senate could last far past the Nov. 4 election, with possible run-offs in Louisiana and Georgia and surprising surges by independent candidates in Kansas and South Dakota creating new uncertainty for both parties.

All four states are critical to Republican efforts to pick up the six Senate seats they need to hold a majority of the 100-member chamber, and the added unpredictability could extend the battle for Senate control into December or even early January.


Mary Landrieu will probably win the Louisiana runoff (despite trailing her Republican challenger Bill Cassidy next Tuesday).  Michelle Nunn could win the Georgia runoff (but it's still agonizingly close).  Kansas might boot Pat Roberts, but South Dakota is going to elect the Republican, Mike Rounds.

It will be Joni Ernst in Iowa.  Jean Shaheen will hold off Scott Brown's surge in New Hampshire.  But Alison Grimes won't knock off Mitch McConnell in KY, and Cory Gardner will beat Mark Udall in Colorado.  Kay Hagan in NC and Mark Begich in AK are likely to prevail.  David Pryor appears to be fading fast in Arkansas.  Michigan isn't being contended any longer by the Republican.

So where does that leave us?

The Republicans need six, and by my measure they are flipping five: West Virginia, Iowa, South Dakota, Colorado, and Arkansas.  Update: Nate Silver reminds me that Montana is also a flip, so they have their six.  But if Kansas turns blue, then they need one of Louisiana and Georgia.  To be decided in December, or maybe even after the holidays.  (That would be a month longer than we waited for Bush v. Gore in 2000.)

If it's a tie after that, then Joe Biden becomes the deciding vote in the Senate.  No more funerals in foreign countries for a couple of years, and you'll see senators showing up for votes more often than they skip them, as is now the case.  The consuming Congressional story in 2015 and '16 will be the whip counts for pivotal legislation.

Update (11/4): Booman waited until the last minute and came to the same conclusion as me.  He's pessimistic about the runoffs in Louisiana and Georgia, though.

Are we having fun yet?  Update: Bonus toons ahead of Sunday's regular Funnies. 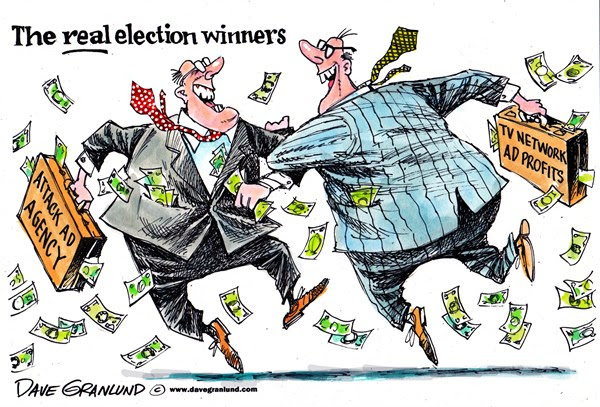 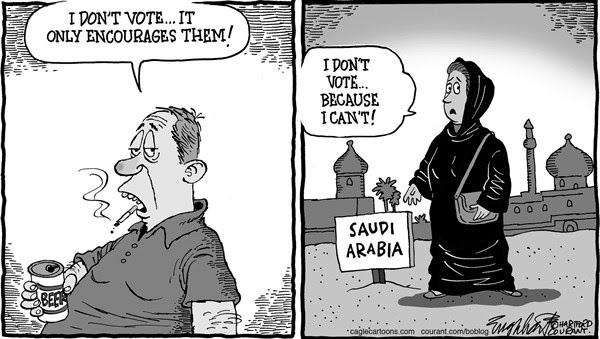 Posted by PDiddie at Saturday, November 01, 2014 No comments: