Villarreal for Comptroller? *Update: No

Christy Hoppe at the DMN also reveals the party's strategy to geographically diversify the statewide slate (embedded links in the excerpt are mine) ...

Democratic statehouse Rep. Mike Villarreal of San Antonio is considering running for comptroller and is expected to make a decision next week. The five-term House member is an investor who holds a masters in public policy from Harvard.

The state Democratic Party has been trying to recruit candidates from different areas of the state, where their presumed popularity and political cred could attract hometown voters to the polls and lend strength to a Democratic ticket.

Bill White and Farouk Shami, with gubernatorial aspirations, and Barbara Ann Radnofsky, for attorney general, are all from Houston. Marc Katz, who has yet to file but has said he wants to run for lieutenant governor, is a restaurant owner from Austin. Bill Burton, an Athens real estate instructor, is from Athens and has filed for land commissioner. But so far, no one from Dallas or San Antonio is on the ticket.

Villarreal's spokesman said he will be launching a new website that will include a video about his future vision for Texas. Stay tuned. He might be giving Susan Combs what she asked for.

This news may chase Nick Lampson away from a run.

Update: Uh, no he will not. He filed for re-election to his statehouse seat instead.

BTW, here's my post from last year about this time regarding 2010 Democratic possibles. Pretty close to what our status is today.
Posted by PDiddie at Wednesday, December 09, 2009 No comments:

-- Michael McCaul is getting all of the blame for letting the BAF Systems contract slip away to Wisconsin, despite even Bill White involving himself in some last-ditch effort to save it. More at Off the Kuff and Burnt Orange.

-- Farouk Shami -- in the wake of Hank Gilbert's withdrawal and endorsement -- is firing staffers and catching hell over his voting record -- or lack thereof.

-- Kinky is going to take a few more days to decide what to do. Update: Land Commissioner Jerry Patterson took out a personals ad begging for some competition.

-- Kay Bailey filed for governor yesterday, and then she quickly lost control of the day. She caught some flak for it, too.

-- The Gene Locke campaign has been paying for those gay-baiting mailers. Which also explains why he never renounced the endorsement from Hotze's group. How much deeper in the sewer can this campaign sink? Every day brings another fresh-yet-foul flush. More from Kuffner, Muse, Erik, Stace, Neil, and John.

It was bad enough when mayoral candidate Gene Locke told us with a straight face that he wasn't rejecting the endorsement of Steve Hotze and his Conservative Republicans of Harris County political action committee because Hotze was backing him on the basis of something other than his opponent's sexual orientation.

“If it's based solely on that one issue I've rejected them,” Locke said when asked during a TV debate why he accepted Hotze's endorsement. “If it's based on looking at my record and seeing that I am the better candidate, I would accept them.” ...

Now Locke wants us to believe that neither he nor his campaign had anything to do with the fact that his campaign finance chairman, longtime political patron and activist Ned Holmes, and finance committee member James Dannenbaum each gave a whopping $20,000 to Hotze's political action committee just days before that committee sent out the mailer endorsing him over Parker. ...

It's long past time for the Locke campaign to slither back into the ditch they came from. More with video at KHOU.
Posted by PDiddie at Tuesday, December 08, 2009 No comments:

Is this good news or bad news?

A new Rasmussen poll suggests that the Tea Party movement is far and away more popular than the Republican Party it seeks to influence -- so much so that if it were a full-fledged political party, it would overtake the GOP on the generic Congressional ballot.

Some Republicans think this means they would be in the lead, 41-36. That would be the easiest bat-down ever: "NY-23".

While some Republicans have expressed dismay over the emergence of the tea party movement, others have suggested that the GOP should embrace the group and its issues.

Tea party sympathizers recently proposed a resolution to make the RNC withhold its endorsement and funding unless candidates pass an "ideological purity test." The movement will hold its first national convention this January in Nashville, and Glenn Beck has indicated that he intends to stake out a more activist role in politics going forward by holding seminars across the country to educate conservatives on how to run for office without the support of a major political party.


But the Republican party has yet to determine whether or not they can harness the energy emanating from the right wing without being pulled out of the mainstream. This dilemma was highlighted by the GOP's November loss of a congressional seat it had held since the 1800s, after a tea party-supported candidate pressured the establishment Republican out of the race. That race suggested something rather striking: while the GOP may not be able to win without the support of the tea party movement, they might not be able to win with it running the show either.

Both Charles Kuffner and Barb at Kos don't like Rasmussen; I would happen to feel the same way about all polls personally. So accepting the numbers at face value, here are the questions ...

1. Can the TeaBaggers get on the ballot? Where they can, say goodbye to the establishment Republican candidate. The success that the movement has from city to county to state to state will vary greatly, but getting on the ballot may not be their smartest move ...

2. Rather than become a third party -- with all of the obstacles in place by the two-party system -- can they instead be successful in taking over the Republican Party? And again can they do so locally, statewide, nationally? It's probably already happened in Texas, FWIW. Rick Perry had one supporter resign as RPT chair (she immediately joined his campaign) only to be replaced by another. There remains an active effort -- if considerably muted in the wake of Dick Cheney's endorsement and her filing yesterday -- to push "moderate" Kay Bailey out of the race. Then again, it may have expired on 12/3.

Queen of the TeaBaggers Sarah Palin seems to be distancing herself from Governor 39% --or maybe it's him avoiding her -- after many winks and gropes between them earlier in the year.

In other TeaBag developments, Perry is so far ducking debates with Debra Medina, and nutbar Kevin Brady has two challengers from the Republican right flank.

More to post as developments warrant.
Posted by PDiddie at Tuesday, December 08, 2009 No comments: 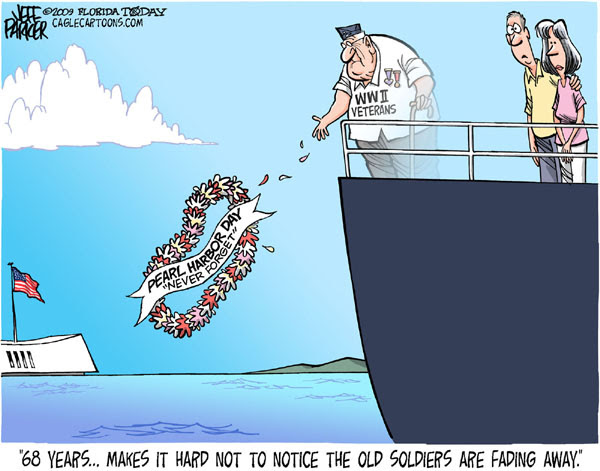 Ed Johann will always remember the sound of planes diving out of the sky to bomb U.S. battleships, the explosions and the screams of sailors. He still recalls the stench of burning oil and flesh.

The 86-year-old retired firefighter is due to return Monday to Pearl Harbor for the first time since World War II to attend a ceremony marking the 68th anniversary of the Japanese attack.

"I really don't know how I'm going to handle it," said Johann, from his home in Oregon. "When I think about it, all I have is unpleasantness. I'm sure it's not like that now."

Johann was a teenage apprentice seaman on Dec. 7, 1941. He had enlisted in the Navy only five months earlier so his parents, who picked and packed tomatoes and other crops in California's San Fernando Valley, wouldn't have to support him.

He and two other sailors were waiting to ferry passengers on a small boat to and from the USS Solace, a hospital ship that was moored in Pearl Harbor, when they saw the Japanese planes.

Read the rest.
Posted by PDiddie at Monday, December 07, 2009 No comments: