It's no longer about Mark Foley 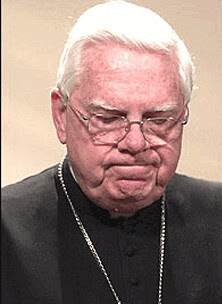 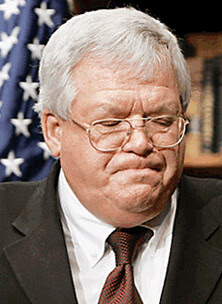 Though his defenders have used every pathetic excuse they can think of to explain Mark Foley's behavior -- "he's gay", "he's an alcoholic", "the e-mails weren't improper but the IMs were", the deadly Republican virus of the Congressional page scandal continues to spread, and will undoubtedly claim more conservative victims.

The account by Kirk Fordham, who resigned yesterday from his job with another senior lawmaker, pushed back to 2003 or earlier the time when Hastert's staff reportedly became aware of Foley's questionable behavior concerning teenagers working on Capitol Hill.

That makes four people -- the other three are Majority Leader John Boehner, RCCC chair Tom Reynolds, and Page Board chair John Shimkus --that have thrown Dennis under the bus. Hastert chose the mouthpiece of another paragon of Republican virtue, Rush Limbaugh, to say that he won't resign.

The over/under on the Speaker being gone is Friday, October 6, at 5 pm.

The guy who just took Tom DeLay's place smells a political opportunity for himself. I'm thinking he's thinking that if his disgraced party can just hang on to a majority, then he will get to be Speaker. Fat chance in either case.

Reynolds -- he's the man responsible for getting Republicans elected to the House of Representatives -- is already sinking fast. No surprise: among his many errors of judgment and besides whatever role he played in concealing a sexual predator, that he took $100,000 from Foley shortly after the "naughty e-mails" were re-discovered marks him an accomplice to the crime.

Shimkus, the GOP House member from Illinois who heads the organization responsible for managing all the business of congressional pages, doesn't think he's done anything wrong either:

Amid mounting criticism from his own party, U.S. Rep. John Shimkus, R-Collinsville, said he acted properly when confronted last year with a questionable email sent by disgraced former congressman Mark Foley to a former congressional page.

"I don't know of a single thing I would have done differently," Shimkus told The State Journal-Register editorial board during an hour-long Wednesday meeting.

These people have simply been in Washington too long. They have lost the ability -- if they ever had it in the beginning -- to understand the concerns of real people, such as parents who want their children to be able to go to Washington as an intern for a Congressman and be free of unwanted sexual advances.

Shielding a pedophile in order to maintain political power is about as sick, sad, and sorry as it gets. And they will all have to answer for it.

Let's hope the voters in their respective House districts send them a message on November 7.
Posted by PDiddie at Thursday, October 05, 2006 No comments:

FOX thinks Foley is a Democrat 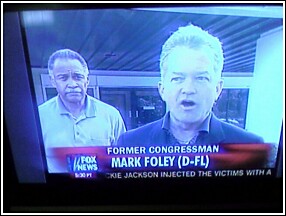 Three different times, for about twelve to fifteen seconds each, in two different segments during Bill O'Liar this evening.

I'm sure it was just an oversight.
Posted by PDiddie at Tuesday, October 03, 2006 No comments:

GOP* collapses in morass of scandal

1. The Congressional page scandal could claim Speaker Hastert, as several conservatives, including the Washington Moonie Times, are clamoring for his resignation. The SCLM has failed to notice -- natch -- how his explanations regarding the affair have evolved.

The Republican insider reaction has ranged from Tony Snow's "they're just naughty e-mails" to "we're gonna lose it all".

2. Bob Woodward's book "State of Denial" asserts that George Tenet told Condi Rice about the al-Qaeda threat on July 10, 2001 -- before the infamous PDB in Crawford. Rice claimed she couldn't recall this meeting; White House records verify that it took place. This warning was never mentioned to the 9/11 Commission; several of its members expressed shock that they were hearing about it for the first time. Well, they weren't hearing it for the first time, according to McClatchy Newspapers' DC bureau. They just forgot to include it in their report.

3. The National Intelligence Estimate memo -- you remember that one; it said that the war in Iraq has increased the threat of terrorist attack -- comes in third in this week's Truth-Be-Told sweepstakes.

4. And completing the superfecta, some guy named Jack Abramoff has been lobbying the White House quite a bit more than anyone ever thought.

I can't say it any clearer than former Republican sycophant Chris Matthews did, last night on Jay Leno:

"If you want Bush to stay in control, vote Republican. If you want to put a leash on the little guy, vote the other way."

Too busy to write at length, but not too busy to point to some other reading you should be doing:

-- Hal and Stace tell about the Johnson-Rayburn dinner last night.

-- BOR has a picture of a billboard blasting Lamar Smith, and points to Republican't.org, where you can design and build your own.

-- Anna got a little Kinky thrust in her face. (It's not as gross as it sounds, though it continues to reveal the alleged gubernatorial candidate as hostile, intolerant, and unhinged.)

-- The response from the right regarding the pedophilic episodes of Mark Foley seems to be "Well at least he resigned, unlike Clinton". That's what they're telling their children in church this morning, I'm sure. ThinkProgress has the timeline of the Republican coverup. Easter Lemming outs a few closeted gay Republicans, including Governor MoFo and Lite Gov. Dewhurst. Here's another long list of conservative sexual deviants, including Houston's very own Jon Matthews. And here's a better excuse the GOP is free to use without compensating me: "Really, this is no different from what the Roman Catholic church did."

-- NewsLost: Congress revoked the Wright amendment. Oh, and Bob Woodward has another book out; something about the Bushies and the Iraq war. You can read some excerpts here. Yes, it contains the usual disagreements among Rumsfeld and Cheney and Powell and Rice about how to prosecute the war, and the expected disclosures of all the lies we've been told, and even a little morsel for the gasoline-price-conspiracy theorists (of which I am a recent convert):

In a claim that could fuel conspiracy theories about the recent oil price decline – in an interview to be broadcast on CBS on Sunday – Mr Woodward described a conversation between Prince Bandar bin Sultan and Mr Bush in which the former Saudi ambassador said he could ease oil prices ahead of the elections.

“They could go down very quickly. That’s the Saudi pledge. Certainly over the summer, or as we get closer to the election, they could increase production several million barrels a day,” Mr Woodward said.

-- The Astros' postseason possibility will be known today. (Viewing tip: watch the baseball, because the football will again be excruciating.) Even more uncertain than the Astros' playoff fate is the validity of the steroid charges against Roger Clemens and Andy Pettitte.

-- Finally, some funnies for Sunday.
Posted by PDiddie at Sunday, October 01, 2006 No comments: