Ellis county for me. Power out 4-5 hrs during the day Sunday, then 1-2 hrs yesterday. I was at work but 81 yr old mom home having to deal. Mini-king #AbbottFailedTexas ignores #FixTheGrid. #txlege is the worst. https://t.co/ux4znzCpU2

You know what hasn't been added to the call? Anything to fix the loophole that allows gas suppliers to opt out of regulation for $150, leaving us vulnerable to outages this winter. So Texas will regulate whether businesses can require vaccines but not gas supply. Got it. #txlege https://t.co/mXLcpMyLaX

#txlege is voting out more maps that give White voters disproportionate power at the expense of BIPOC voters. Great way to celebrate a holiday about reckoning with part of America's racist history. Happy Indigenous People's Day, y’all. #HappyOct11fromTXLege #NoFairMapsonOct11 pic.twitter.com/aciqbIOci9

I just want to point out that it is very likely that neither the Texas Senate nor the Texas House is using race in the correct way - one house “not at all” and the other in entirely too crude and simplistic a fashion. #txlege https://t.co/xnhFaSJFEH

ICYMI: ahead of the Texas House debating a proposal for their own district lines on the floor tomorrow, watch this analysis & recap of the #redistricting process & the partisan impacts of the new lines region-by-region 👇🏽https://t.co/oqRy7rRAyI #txlege #HB1

.@SouthwestAir and the pilots union say #VaccineMandate had nothing to do with the massive flight cancellations https://t.co/vrzRutv0DG via @salhernandez #SouthwestEmployees


I'd like to leave Ted Cruz out of this if that's okay.

John Oliver on AT&T sponsoring Texas Abortion Law,
while casting a mist over what they actually supportpic.twitter.com/MNDrvLh0HW

On @CapitalTonight with @KarinaKling, our publisher @HKronberg says it's clear former President Trump is taking his cues from @DanPatrick on attacking Speaker @DadePhelan and endorsing Texas Senate candidates #txlege pic.twitter.com/wCIOFreChC


There are always criminal and social injustice updates.  Every goddamned day.

The threads are unravelling in Waller Co. Today, the DA said police mishandled the investigation and crime scene. DA is also investigating connections between the teen's family and police https://t.co/mK1jLTNjBV

A 17th human being has now died in the downtown Houston jail this year. He died after sheriff's deputies tased him. https://t.co/K5BTIW2mhN


I have one serious case of schadenfreude this morning.

#BREAKING Former Houston Police Chief Art Acevedo — now chief in Miami — was suspended Monday night from his new job and will be fired, according to a statement from Miami City Manager Art Noriega. https://t.co/WCbkfXGWJC

I have canned goods that have been in my pantry longer than he’s been in Miami. https://t.co/cKsek2vEw6


Same old nothing from Mr. "I think Acevedo has done a good job" on yet another local topic.  Those campaign finance reports and school board races sure do eat up his time, I suppose.  Nobody does hyperlocal better, unless you're needing hot-off-the-press scoops about Alief school bonds.

Make that two cases of schadenfreude.

The camping ban has made it “incredibly difficult and much less efficient” to find people experiencing homelessness and connect them with the help they need, said Mark Hilbelink, director of Austin’s Sunrise Homeless Navigation Center. https://t.co/Fjg7icV9KX


Why don't you get a jump on the home seller's market and GTFO NOW, Matt?

“If we don’t succeed, I may leave Austin. I’m not making any plans,” [Mackowiak] said.

Well, that right there is reason enough to get out and vote against Prop A. https://t.co/22C1lYoGD1


Last before moving on: an update to yesterday's Wrangle, where LareDOS told us about the Biden admin canceling border wall construction contracts:

The same companies that were building walls under Trump are taking the bollards they had already fabricated and cutting them down. Govt officials are now calling them “guardrails” and claim they are “repairing levees” but we know they are building 😒#BidensWall 2/5 pic.twitter.com/2Q1l3c5tJP

Thousands of years before land speculators like the Allen Brothers arrived in 1836 or slave traders Jim Bowie and Jean Lafitte set up shop on Galveston Island around 1817 -- or even the Spanish conquistador Cabeza de Vaca shipwrecked on the island in 1528 -- there were people living around Buffalo Bayou and the prairies, forests, rivers, and bays of the Texas Gulf Coast. 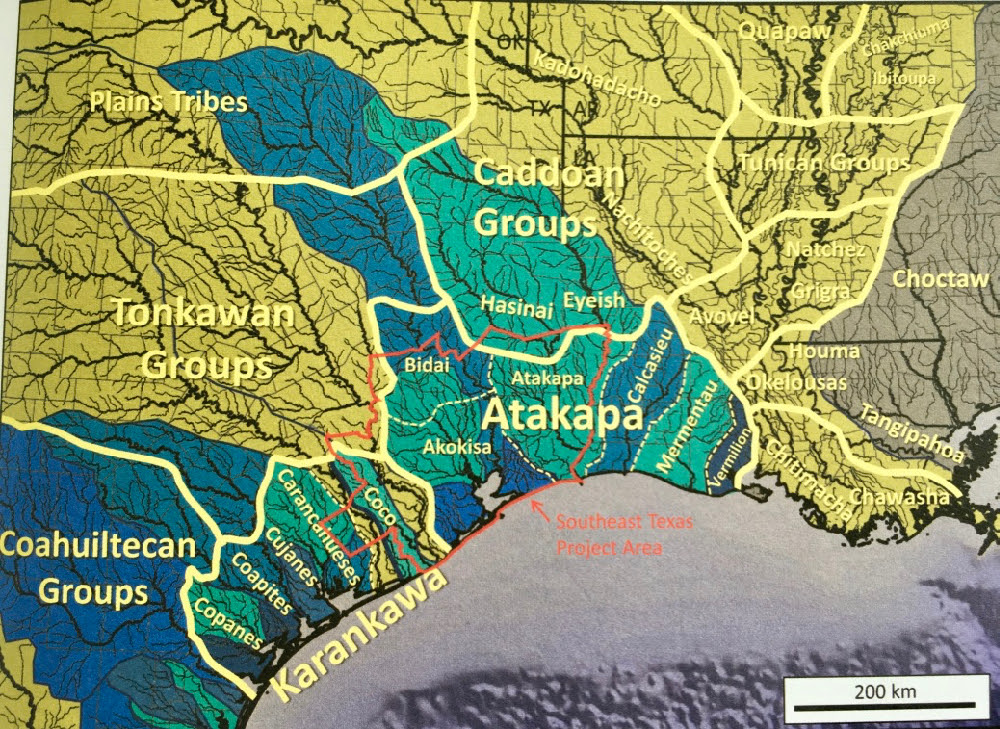 At least 13,500 years ago, the Akokisa people were living in villages along the coast around Galveston Bay. At the time the coast, along with major rivers flowing across, it extended a hundred miles further out, land and channels now covered by water. Sea level then was hundreds of feet lower.

EVERYTHING IS GETTING OBSCENE EXCEPT OBSCENITY: Ken Havis at @webbgallery
by Betsy Lewis

What do you think?