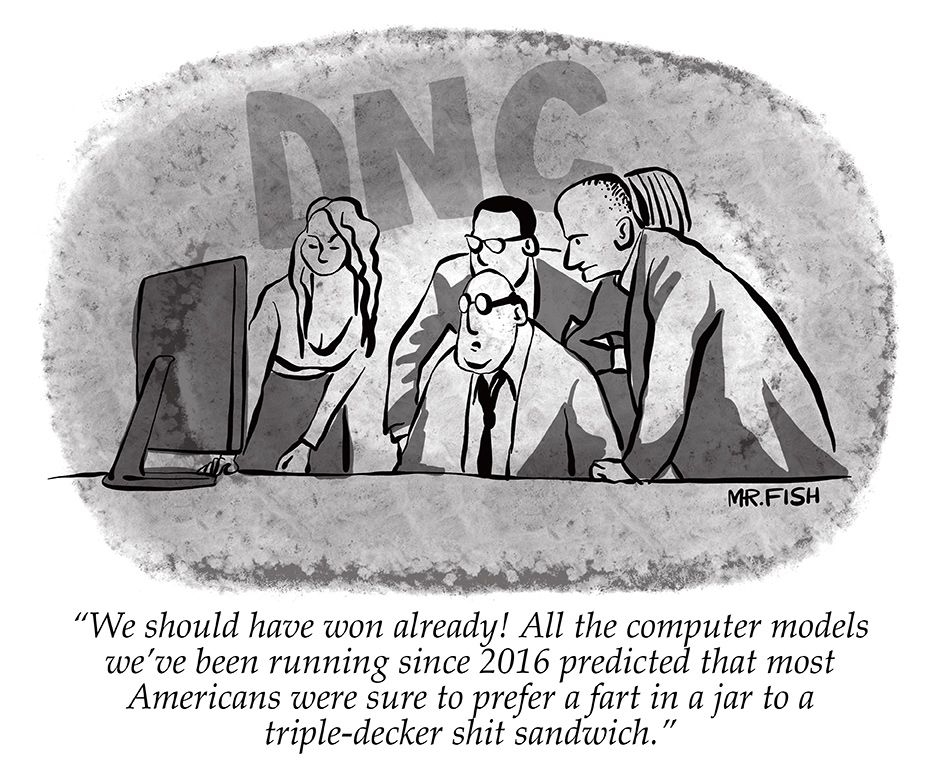 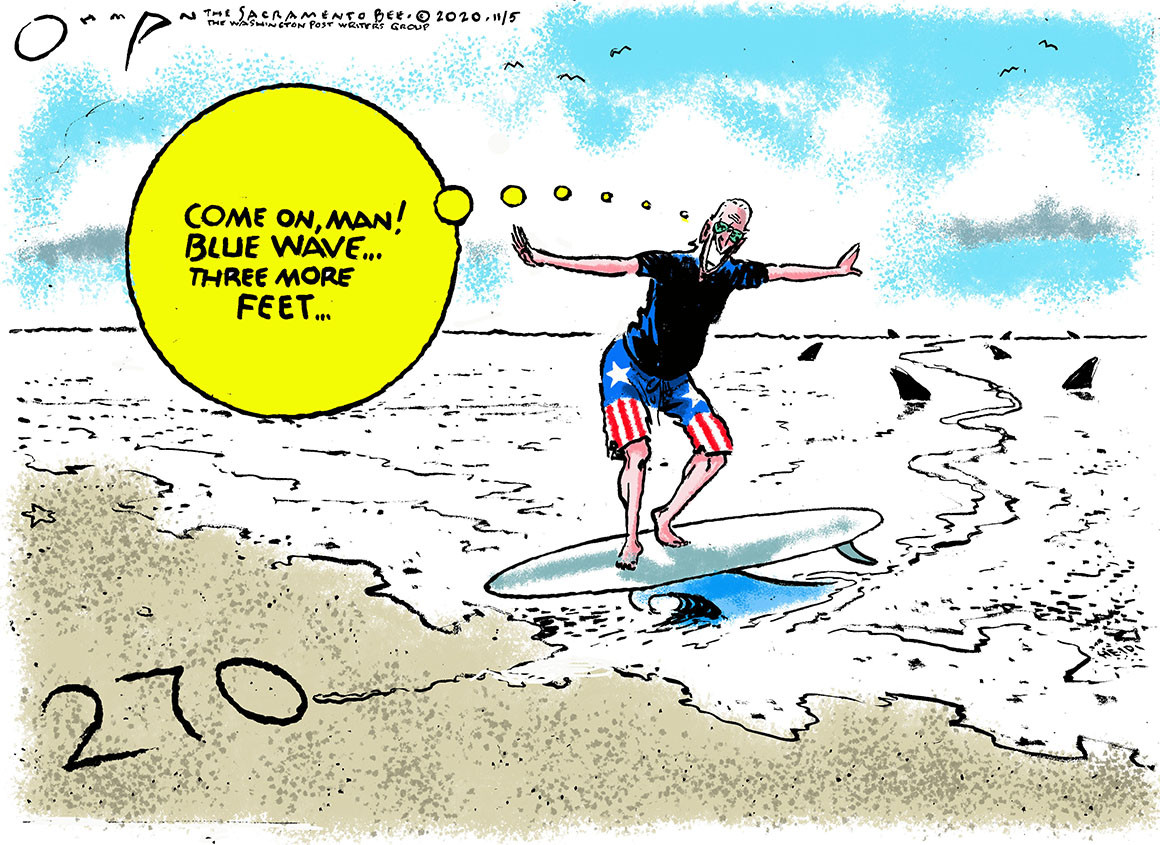 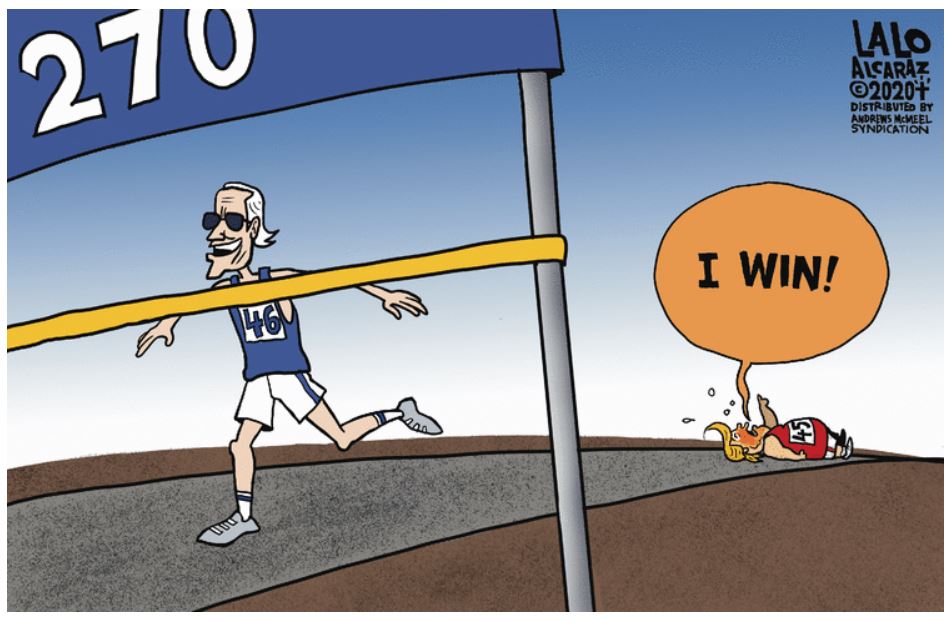 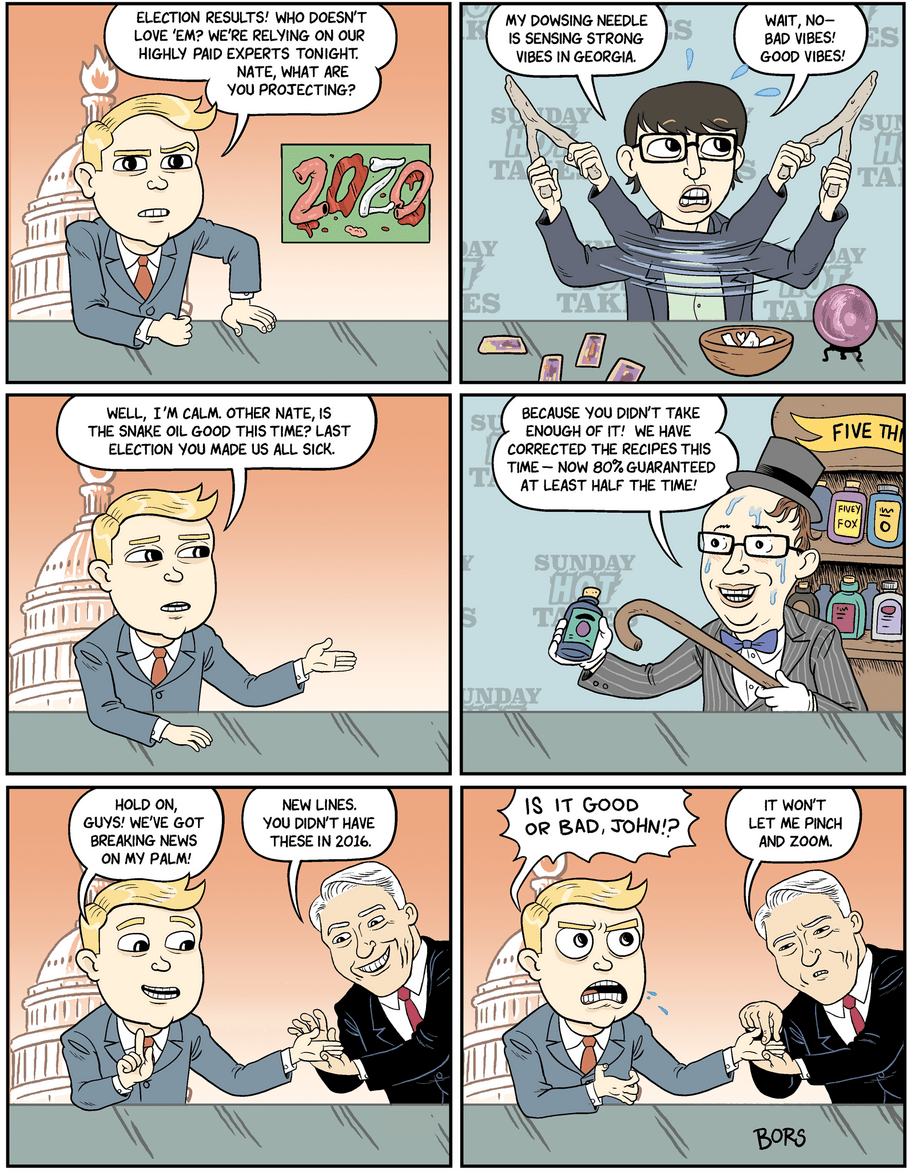 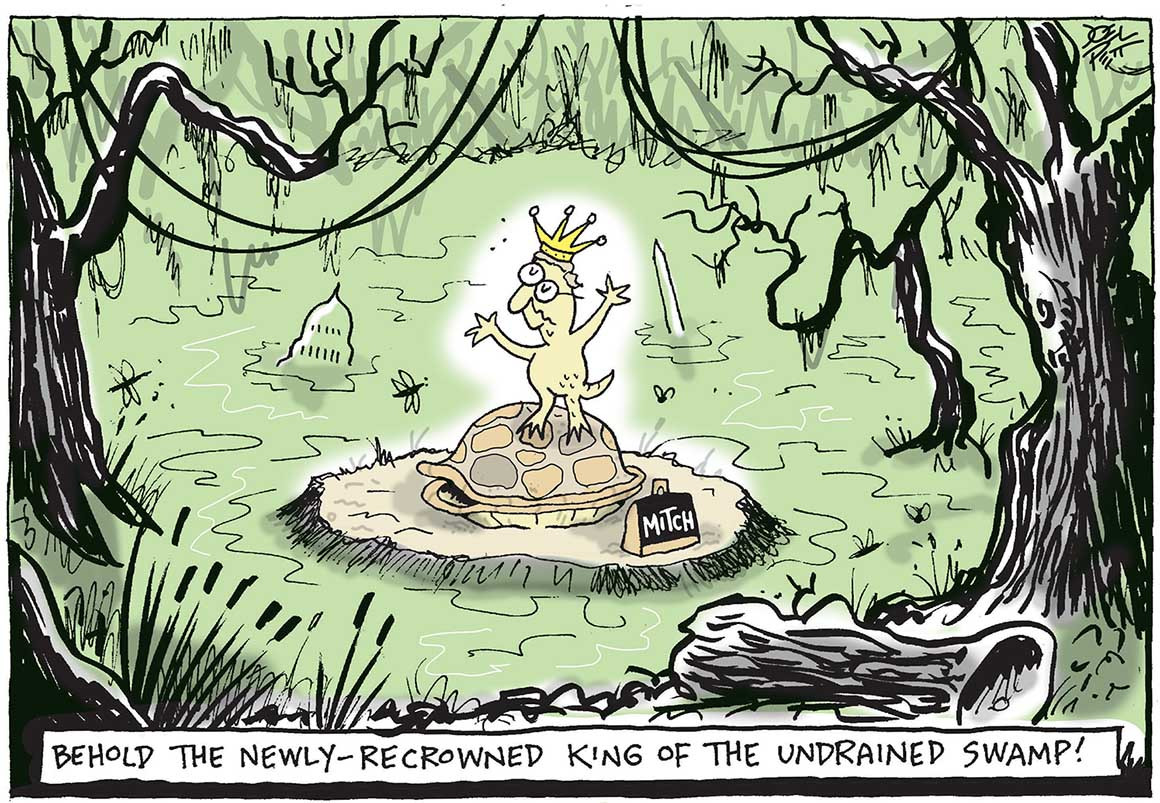 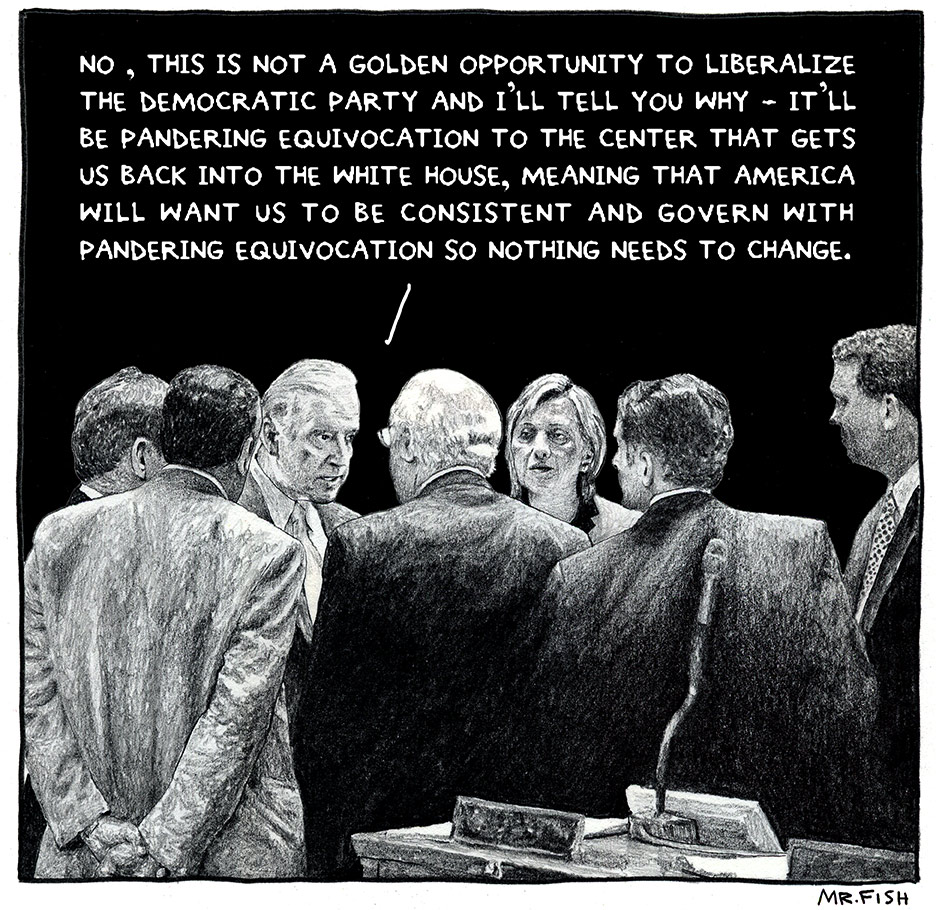 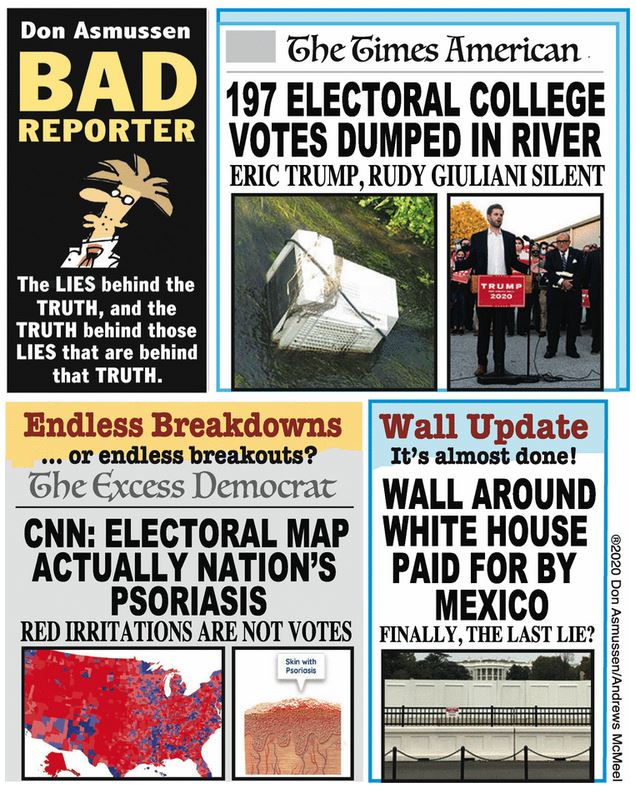 
May blog a listicle of the d*cks, c*nts, and assholes another day.

More (or less) meaningful than the obvious -- the two old creeps at the top of the ballot, both of whom could reasonably appear on both lists -- is this rundown initiated by Niall Stanage at The Hill and amended by yours truly.

Twenty twenty-one is rapidly portending to be as big a pain as this year has been, and with that in mind, you decide which list is which.  There's just one list, by the way.

1. Mitch the Bitch McConnell. Axios started organizing his coronation parade, and was quickly called out for toadying.

2. Nate Silver. He's already pushing back against the universal condemnation he's receiving for his  quadrennial meltdown.  "Polling is better now", Robert Reich told us.  No, it isn't.

3. Pollsters mostly.  Let's first note those who called it accurately:

Iowa pollster Ann Selzer has long been considered the gold standard in her state. Selzer came in for fierce pushback from Democrats, especially on social media, when she released her final poll of her home state at the weekend.

Selzer's poll for the Des Moines Register showed Trump leading by 7 points in a state where other pollsters, including Quinnipiac University and Emerson, had him leading by a single point in their last polls.

On Wednesday afternoon, with 92 percent of the estimated votes counted in the Hawkeye State, Trump’s margin was exactly what Selzer had projected: seven points.

Robert Cahaly of Trafalgar Group is a more colorful and controversial figure than Selzer. Cahaly is a Republican, and he makes no bones about his belief that polls can be affected by a “social desirability bias” -- something that he thinks has a detrimental effect on Trump’s poll numbers.

Trafalgar’s final Wisconsin poll had Biden leading by 1 point, which is sure to be far more accurate than more high-profile competitors. The final New York Times/Siena poll in Wisconsin had Biden leading by 11 points, while ABC News/Washington Post will be eager to forget their own final survey which had the Democrat up by 17 points in the state.

The final RealClearPolitics state average in Wisconsin had Biden winning by almost 7 points. In Michigan, he was ahead by more than 4. Both states are likely to have very thin final margins.

As with Trump’s shock win four years ago, the Midwest appears to have been a particular problem for pollsters. Iowa and Ohio did not get as much of the spotlight as other states in the region, but they were nonetheless predicted to be highly competitive. Trump won both handily.

After 2016, pollsters insisted that they had improved their methods. Now, they face a whole raft of new questions.

Polling averages are shit if polls are shit.  In 1979 I took a statistics course in which I was taught to throw out the responses at the highest and lowest in order to mitigate the deviation from the mean (IIRC).  It doesn't appear that RCP does that.

W. Joseph Campbell, for The Contributor:

Criticism was intense in some quarters Wednesday. Politico’s widely followed 'Playbook' newsletter was notably scathing. “The polling industry is a wreck,” it declared, “and should be blown up.”

Pollsters often seek comfort, and protection, from critics in asserting that pre-election surveys are not predictions. But the nearer they are to the election, the more reliable polls ought to be. And a number of individual pre-election polls were embarrassingly wide of the mark.

Indeed, the polling surprises were many and included Senate races such as those in Maine, where Susan Collins fended off a well-financed challenger to win a fifth term, and South Carolina, where Lindsey Graham rather easily won re-election despite polls that indicated a much closer race. Graham declared after his victory became clear: “To all the pollsters out there, you have no idea what you’re doing.”

It appears that Republicans will keep control of the U.S. Senate despite expectations, fueled by polls, that control of the upper house was likely to flip to the Democrats.

Factors that gave rise to this year’s embarrassment may not be clear for weeks or months, but it is no secret that election polling has been confronted with several challenges difficult to resolve. Among them is the declining response rates to telephone surveys conducted by operators using random dialing techniques.

That technique used to be considered the gold standard of survey research. But response rates to telephone-based polls have been in decline for years, forcing polling organizations to look to and experiment with other sampling methods, including internet-based techniques. But none of them has emerged as polling’s (panacea).

Shy Trump supporters?  Could be.  How do they weight the polling for that?

Trump's lawyers, Biden's lawyers, Repuke lawyers, Dem lawyers, damned lawyers of every stripe scrambling to get a cut of the action.  What a time for a shyster to be alive.

5. Democrats -- Chuck Schumer, Nancy Pelosi, every Democrat running for office that the polling failed, but especially Texas Democrats, who believed that nominating Bernie Sanders was going to be "down-ballot carnage", in James Clymer's words.

Also Barack Obama, not content with two "shellackings" during his midterm elections, had to come to Biden's rescue and enable one more.

Since they got screwed by the polls, you could also say they failed at managing expectations.  Then again, Texas Democrats have been doing that for a long time now.

6. Democratic donors, such as that epitome of the adage "more money than good sense", Mike Bloomberg, plus all the saps, corporate PAC-ish and otherwise, who gave Amy McGrath $88 million to get humiliated by Bitch McTurtle, and a multitude of others who need to have their taxes raised and their wealth redistributed to better causes.

And last but not least: national healing and unity.

The United States was deeply polarized before and during the presidential campaign. It would be fanciful to think those wounds would have been bound up if Biden had won a more clear-cut victory.

The actual result, however, seems like the worst possible outcome on that score.

Trump has made vague but inflammatory accusations of “fraud,” including during an appearance at the White House in the early hours of Wednesday. There is every sign that he will intensify his efforts to call the outcome of the election into question.

The (recounts and court battles) are sure to fire up partisans on both sides even further, with each side accusing the other of trying to steal the election.

There were some progressive victories -- the Squad grew, weed won in a handful of states, and Florida passed a $15 minimum wage.  Harris County was a blue sweep.  Interim county clerk Chris Hollins, alongside Judge Lina Hidalgo, are the brightest stars in the TDP.   But as for Joe Biden ... once he finally wins, he hasn't won really much.  With no Senate majority, all that talk about packing the Supreme Court and abolishing the filibuster is gone with the wind, to say nothing of judicial appointments, climate legislation, healthcare improvements of any kind, and on and on.  There were six Texas House Democrats running to be Speaker last week; now they're lining up behind Dade Phelan (or some other Republican).

QAnon has three new members of Congress (I'm adding Beth Van Duyne of Fort Worth to these two). The SCOTUS is likely to strike down the ACA and Roe v. Wade.

And the third parties got bodied. We saw it coming. What I did not see coming was Jo Jorgensen getting the Jill Stein treatment from Blue Wave Twitter.

"All third party votes belong to Biden no matter how far right the candidates are" is a whole new level of resistance. https://t.co/GOjN7yKsBe


Caitlin Johnstone has 25 takeaways for Democrats.

Looking ahead, a fragmented left must take advantage of the GOP becoming fascists and the Democrats becoming Republicans.  They'll try to coalesce from among the various socialist parties, the DSA caucus (which falls in behind the Democrats' nominee, a non-starter for me personally), the Greens, and the nascent Movement for a People's Party.  They're on the clock for 2022.

What did I miss?  No, no blaming brown people for voting for whomever.  I didn't shame anybody for voting for Biden, not going to start that now.  (I am still collecting thoughts for a future post about the Latinx vote.)

In the comments, you're invited to add some of your weins and looses.  The Lincoln Project grifters? Meidas Touch turned fool's gold?  Trumpism, which is going to thrive long after Trump leaves the White House?  I'd like to hear your take.
Posted by PDiddie at Thursday, November 05, 2020 No comments:

Though the margins in the state’s presidential race were narrower than they have been in years, Texas Democrats underperformed the high expectations they had set for themselves, particularly in the battle for dominance in the Texas House.#tx2020 https://t.co/gO48v4iTaw

Where we’re at in Texas at this hour:

State House isn’t flipping, unclear if Dems will even see a net gain

The Houston metro area was almost a worst-case scenario for Dems in 2020.


What. A. Wipeout. It looks as if the long-awaited Latinx turnout turned against them.

One of the biggest stories in #Texas is what has unfolded in South Texas. Look at Starr County in the Rio Grande Valley, heavy Latino population. It’s a small county but the swing is unreal. Clinton won 79-19 in 2016. Biden won 52-47.

results from starr county, texas, the most latino county in the united states (96% latino)

we are witnessing a dramatic and historic realignment pic.twitter.com/PxC7ofJYL7

Posted by PDiddie at Wednesday, November 04, 2020 No comments: