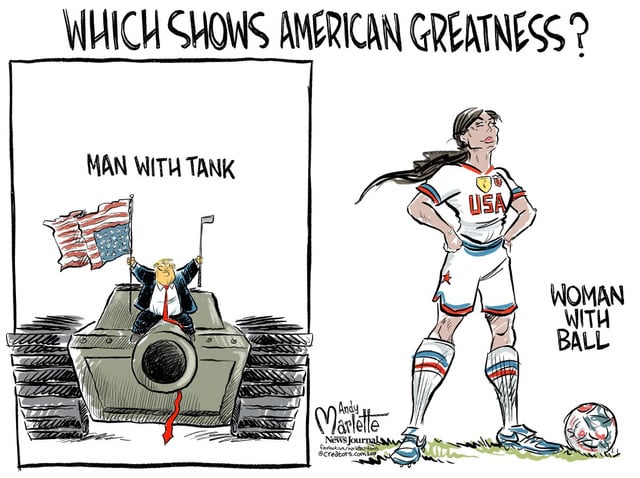 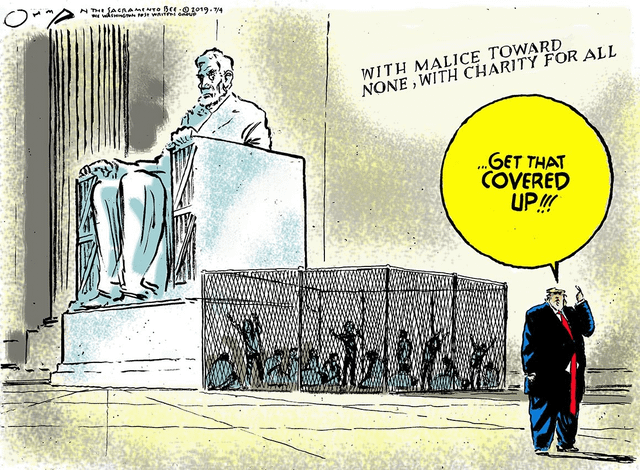 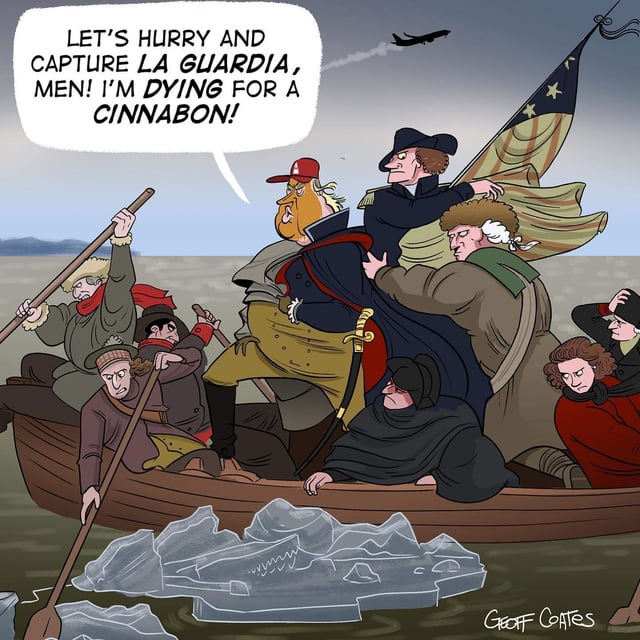 I am as full of polls as Joey Chestnut is -- or was -- with hot dogs, so this Update is light on that news until they calm down.  Looking ahead, today and this weekend, let's see what the names on everybody's leaderboard are up to.

-- Biden was on CNN this morning crapping on AOC, and everything else 'soshulist'.

Biden, speaking with CNN's Chris Cuomo in Des Moines, Iowa, suggested that Medicare for All is irrational, argued that the majority of Democrats are "center left" not "way left," and said Rep. Alexandria Ocasio-Cortez, while "brilliant" and "bright," did not represent Democrats who can win a general election in a competitive district or state.

The interview made clear that Biden, who is facing criticism from the left of the party amid an increasingly contentious Democratic primary, does not feel the need to sway to the left to capture the party's base and, instead, hopes to set himself apart by embracing his moderation.

Biden backed up that confidence by pointing to the 2018 midterm elections, where a host of swing districts were won by more moderate Democrats.

-- Ten candidates are in Houston today for the NEA forum.

On Friday, @Lily_NEA will sit down to discuss all things public education with:@JoeBiden@JulianCastro@BilldeBlasio@KamalaHarris@JayInslee@AmyKlobuchar@BetoORourke@TimRyan@BernieSanders@ewarren

-- Elizabeth Warren is having a town hall afterwards this evening at UH, her alma mater, and my state rep, Shawn Thierry, is moderating.

BREAKING-This Friday, I’ll have the honor & pleasure of introducing @SenWarren and serve as the Moderator for her Town Hall @UHouston ! The Meet & Greet begins at 4:45 PM 👋🏽👋🏽 The Town Hall begins at 5:45 PM. You will be glad you came to this one! #ElectionsMatter #WomenWhoLead pic.twitter.com/cmYvTZvE22
— Shawn Thierry (@RepThierry146) July 3, 2019

-- Kamala Harris is carrying on her feud with Biden about busing, now a week old, and oddly keeps walking back (i.e., flip-flopping) her position on it, as she has done w/r/t M4A.

It sounds here like @KamalaHarris is now taking something more like the @JoeBiden position on school busing. So what was that whole thing at the debate all about?https://t.co/bRDGzp7nvy
— David Axelrod (@davidaxelrod) July 4, 2019

So to recap, during the debate, Kamala Harris:

Raised her hand when asked if she’d eliminate private insurance, then backtracked.

^^This is a Twitter thread you should read all of.

Her repeated inability to stand for something without wavering is a chronic problem for the California senator, and by my view is squandering her debate momentum.  She has the charisma and the debate chops down pat, but there are indications that black female voters don't really trust her.

-- This reflects Mayo Pete's hard ceiling as well.  No matter how much money he raises, he won't get on the ticket -- top or bottom, no pun intended -- because of his inexperience and his problems with African Americans.  What he will be is one of the Democratic nominee's most valuable assets, in terms of fundraising and getting out the vote for the demographics with which he is so popular.  He might be the Donkeys' most valuable kingmaker this cycle.

Speaking of shoring up bonafides with the black community ... Buttigieg, Harris, a "reeling Beto O'Rourke" (I believe that was the word I used) and Cory Booker will all be speaking at the Essence Festival in New Orleans on Saturday afternoon.

Top Democratic contenders in the 2020 Presidential race are coming to #EssenceFest! @CoryBooker, @PeteButtigieg, @KamalaHarris, @BetoORourke & @ewarren will be answering your questions in NOLA. Tweet us questions for these presidential hopefuls & let your voice be heard! pic.twitter.com/LTLY3XVS7F
— ESSENCE Festival (@essencefest) July 1, 2019

-- So many in the media have tried to write Bernie off despite the evidence that contradicts their premature reports of his political demise.

Hot take:@MSNBC should be barred from hosting debates.

Not only did they have a ton technical issues, one of the moderators (@maddow) deliberately mischaracterized one of Bernie’s positions.

WashPost/ABC poll today: @BernieSanders gains 12 points, solidifies position in 2nd place, only 6 points behind Biden, and with double the support of his next nearest rivals combined: https://t.co/rXV28QH8hV

And yet here are today’s headlines from the political press: pic.twitter.com/ZUvMzyZvNM
— David Sirota (@davidsirota) July 4, 2019

JFC @politico you'll do anything to keep @BernieSanders out of your headlines won't you! (Try "Biden and Sanders lead, Harris and Warren tied for third" you jerks) pic.twitter.com/CZxfKm3hJo
— LauraLive🌹🔥 Has #NoMiddleGround (@Uphill_Laura) July 3, 2019

Sanders waves off the holiday heat as he takes on 5 Independence Day parades in 2 days https://t.co/D6UMtBkMKi via @DMRegister
— #BlackWomenForBernie2020 (@LostDiva) July 5, 2019

-- Marianne Williamson made lemonade out of the lemons virtually everyone on social media and late night teevee squeezed on her.

For those who might think I want fairy dust to replace public policy, here is the Issues page from my campaign site. Please peruse for any signs of extra-terrestrial influence: https://t.co/xIenFQeBVI

She also clapped back at Vogue for leaving her out of the picture of Democratic women running for president by Photoshopping herself in.

-- And some Green Party developments, which Gadfly has already mentioned and were first reported on IPR, document internal strife over the inordinate preference shown Howie Hawkins by the GPUS.

David Collins had blogged just a few days prior:

... GPUS is not showing any pronounced preference for a particular candidate. Howie Hawkins, the many-time candidate for Governor of New York, may have the nationwide name recognition, but Dario Hunter and Ian Schlakman have strong followings, especially among young Greens.

While the bickering rings of Hillary Clinton's minions denying Bernie Sanders the 2016 Dem nom, it's obvious to this observer that intra-party politics -- irrespective of party -- is riven with these Hatfield & McCoy feuds.  It's not dissimilar from what's happening locally.

More on the latest next Friday!
Posted by PDiddie at Friday, July 05, 2019 No comments: 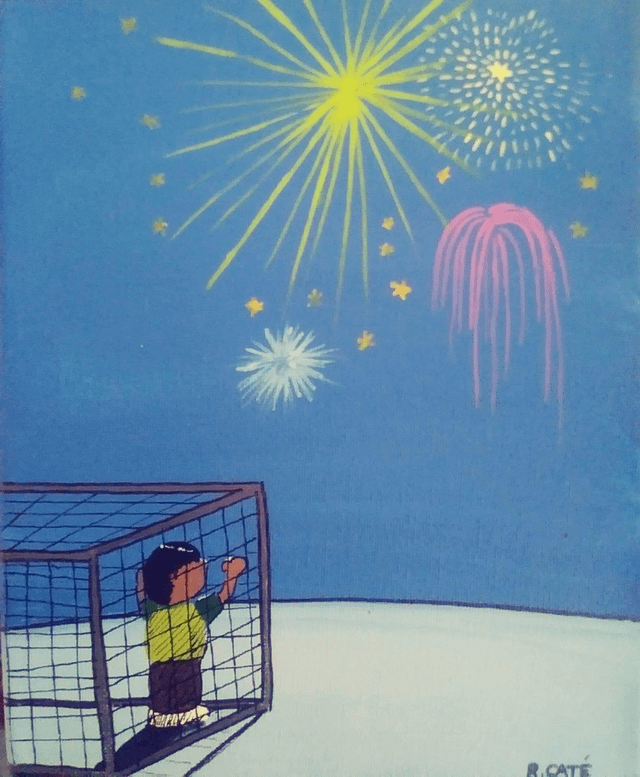 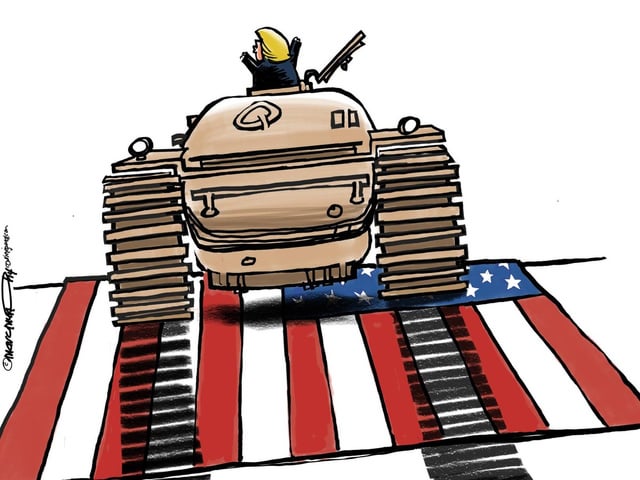 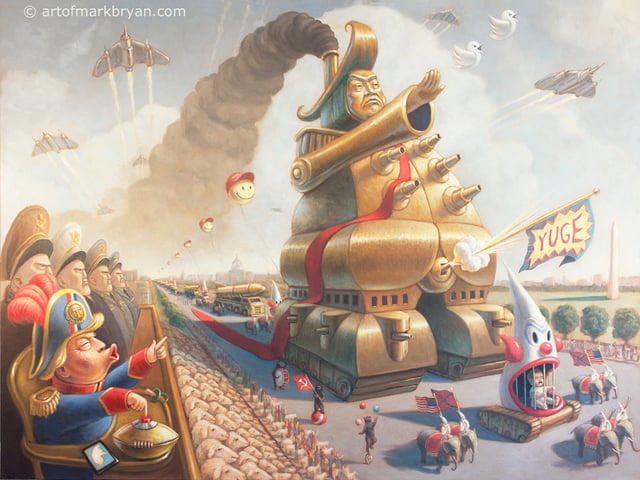 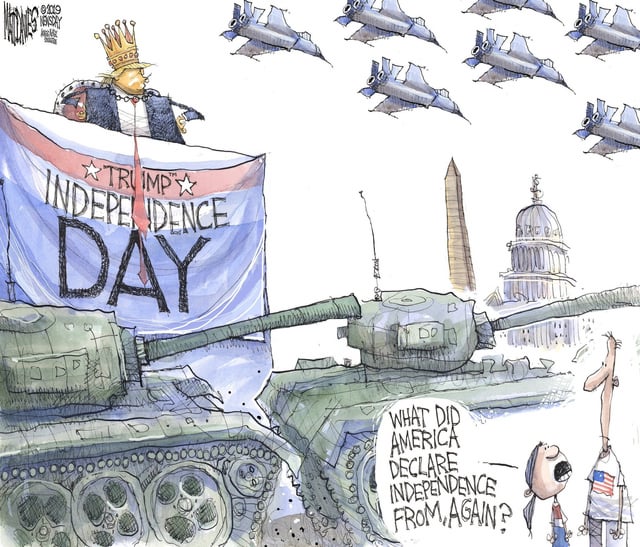 The Texas Progressive Alliance wishes everyone a happy Trump-free Independence Day as it brings you this week's roundup of the best blog posts and lefty news about and around the state!

The continuing horror of Trump's concentration camps at the southern border was magnified by the drownings of a 20-year-old Salvadoran father, Oscar Alberto Martinez Ramirez, and his 2-year-old daughter, Angie Valeria.  A memorial vigil was held last evening in McAllen and also Brownsville's Hope Park, about a mile from where their bodies were discovered on the banks of the Rio Grande.

The Texas Tribune has a dedicated page for agencies who are assisting migrant families.

After Bank of America chose to get out of the private prison/detention center business, John Cornyn thought it would be a good idea to threaten to switch his accounts.


I may have to change banks: Bank of America will no longer do business with companies that run detention centers - CNN https://t.co/8xG7hlvlOG
— Senator John Cornyn (@JohnCornyn) June 27, 2019


Yes, Texas can and will do better than Cornyn.

How much money did GEO Group and other for-profit prison industries who operate concentration camps donate to you and @JohnCornyn?#CloseTheCamps #AbolishICE #DefeatCornyn https://t.co/rCB795yq4H
— Sema for U.S. Senate (@_SemaHernandez_) July 1, 2019


Several reports in the this week's Wrangle examine how last week's SCOTUS decisions on gerrymandering and the census citizenship question might affect the Great State.

The Supreme Court has ruled that federal courts have no role to play in blocking partisan gerrymandering. Texas Republican lawmakers could see this as an opportunity to redraw district lines in their favor, according to experts.

Drawing political boundaries to favor one race over another is against the law. But in Texas, the distinction between racial and partisan gerrymandering is often blurry.

“Sometimes the defense of the Texas Legislature has been that we did the redistricting not based on race, which is clearly unconstitutional, but we did it for partisanship reasons,” Charles 'Rocky' Rhodes of South Texas College of Law-Houston told Houston Matters. “We didn’t discriminate against Latinos because they’re Latinos. We discriminated against them because they vote Democratic rather than Republican.”

In the past, majority lawmakers of either party have been furtive about trying to draw district lines in their own favor. GOP lawmakers could prove much louder and more open about doing so in the next round of redistricting, according to Joseph Fishkin, who teaches law at the University of Texas at Austin.


More on the Lege's redistricting committees from TXElects.

Meanwhile, the House Redistricting Committee released a tentative schedule for 28 interim hearings around the state over a one-year period: The court put a proposed citizenship question for the 2020 Census on hold, ordering the U.S. Department of Commerce to provide a clearer explanation of why the question is necessary.

Research has shown the question drives down the response rate from minority groups and immigrants, which could cost Texas federal funding.

Luis Figueroa, the policy director for the Austin-based Center for Public Policy Priorities, said the economic loss of federal funds could be as much as 8%. “That would be absolutely devastating to the Texas economy, to our representation, to businesses investing in Texas. So this is why I say the stakes couldn’t be higher,” Figueroa said.

An undercount in Texas could also lead to the loss of a congressional seat.


Eric Benson at Texas Monthly writes that the Supreme Court's decision on the citizenship question helps the Lone Star State, but that the real work lies ahead.  And Kuff has two updates on the census question lawsuit.

In the briefest of Lege news, former Texas House Speaker Joe Straus announced the formation of yet another political action committee aimed, presumably, at electing thoughtful, moderate conservatives (sic) like himself to state office.  And Stephen Young at the Dallas Observer says "See ya!" to Cockroach Jonathan Stickland.

SocraticGadfly, having read the story about Jerry Falwell Jr., wonders if Trump/Cohen have nekkid pix of Robert Jeffress.

A federal judge ruled against Formosa Plastics and their Lavaca Bay-area plant, saying that it was in "enormous" violation of both its state-issued permits and the federal Clean Water Act, and that the TCEQ had either been unwilling or unable to bring them into compliance.

Houston's municipal elections gained two new high-profile candidates, as former At Large CM Sue Lovell declared she would enter the race for mayor, and a second member of the Geto Boys joined the rapper formerly known as Scarface in a bid for a seat on city council.  And the Texas Signal reported on Dwight Boykins' faux pas regarding his unsolicited advice to teenage girls.


Jeff Balke at the Houston Press accepts the reality of the I-45 reroute and expansion in Houston, while Tory Gattis at Houston Strategies collected a few more opinion/analysis pieces on the project and offered his own thoughts.

NASA builds for the future by breaking ground on a spaceport and celebrates its past with the recreation of the Apollo Mission Control room, marking the 50th anniversary later this month of the moon landing.  More photos from Ars Technica. Bellaire HS alumna and Democratic presidential candidate Marianne Williamson became an Internet meme sensation as well as fodder for the late night TV comedians (scroll to the end).  Beto O'Rourke and Julián Castro carried on their squabble over immigration, begun in last Wednesday's debate, to dueling rallies in Austin and separate appearances at border detention facilities.  There seems to be a rivalry developing between them as to who is 'the' Texan, and who is 'the other' Texan.

From Steve Rossignol and The Socialist, the official publication of the Socialist Party USA, comes more about the history of socialism in Texas: 'Operative 100', the snitch who maimed the movement.

And Harry Hamid aggregates his posts so far in his battle against cancer.
Posted by PDiddie at Monday, July 01, 2019 No comments: