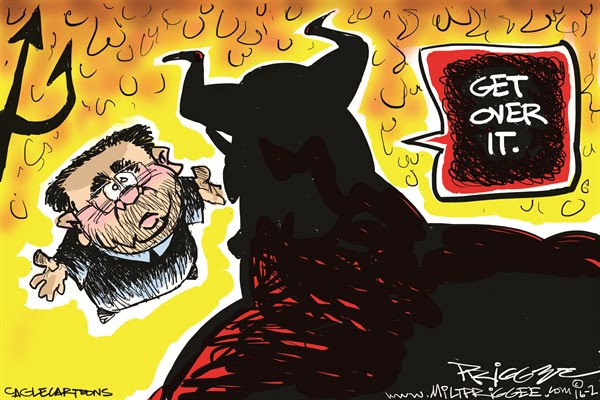 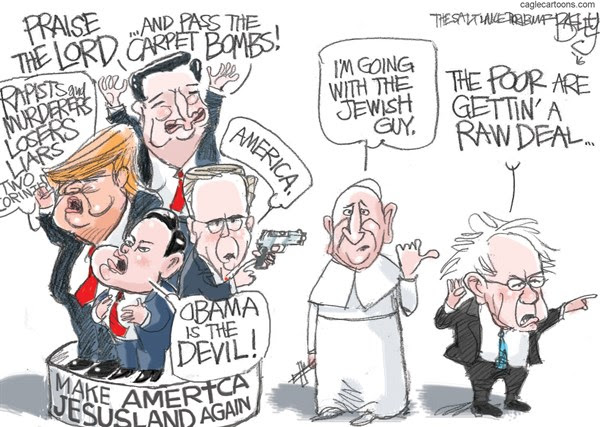 A suicide hotline operated by the Department of Veterans Affairs allowed crisis calls to go into voicemail, and callers did not always receive immediate assistance, according to a report by the agency's internal watchdog.

The report by the VA's office of inspector general says calls to the suicide hotline have increased dramatically in recent years, as veterans increasingly seek services following prolonged wars in Iraq and Afghanistan and the aging of Vietnam-era veterans.

The crisis hotline — the subject of an Oscar-winning documentary — received more than 450,000 calls in 2014, a 40 percent increase over the previous year.

Sometimes the Funnies are no laughing matter.

Scattershooting while we wait for Nevada caucus and SC primary results

More on that if you need it here.

Update, 5:15 p.m. CST: About an hour ago the networks called it for Clinton, who at this posting leads 52-48 with 80% reporting.  She's currently giving her victory speech.  She's still scheduled to be speaking in Houston in a few hours.

-- Bad news for Hillary Clinton: Chris Bell has endorsed her.

So as Democrats, can we maybe try to take advantage of the situation — even here in Texas? We have become the mainstream party, and it’s time to start acting like it. If we nominate Bernie Sanders, we will forfeit any advantage we might have gained. While he has certainly struck a populist nerve and I appreciate many of the positions he has taken, the American people are not going to elect a socialist as president. It’s that simple.


Bell -- like almost all Americans -- is a card-carrying socialist himself.

I am certain he does not realize it.  There's a lot of things Chris Bell doesn't get, though, much like his fellow traveler, Ted at jobsanger.  In 2006 Ted spent a lot of time and effort promoting Kinky Friedman for governor and attacking both Bell, the Dems' nominee and the Democratic Party ... the same party he vigorously defends today from the evil, Not-A-Democrat Bernie Sanders.

You cannot plumb the depths of this hypocrisy with a nuclear submarine.  Like Clinton herself, both men have "always tried to" tell the truth, at least in their own minds.  (I thought Hillary was a Stars Wars fan.  Did she miss Yoda's exhortation to Luke Skywalker during his Jedi training on Dagobah?)

The only question I have left is: why didn't the Houston Chronicle run Bell's op-ed?

-- I'm not sure I understand how Bernie Sanders is going to be able to ask his support network to line up behind Hillary Clinton after this:

"I chose to run proudly in the Democratic primary and caucus and look forward to winning that process. But clearly, as a nation, I think we flourish when there are different ideas out there," Sanders said during MSNBC's Democratic presidential candidate forum in Nevada on Thursday.

"Sometimes the two-party system makes it very, very difficult to get on the ballot if you are a third party, and I think that's wrong. I think we should welcome competition."

That, as loyal readers know, is what I have been saying for some years now.  It's just not what the DNC or the TDP is willing to acknowledge.  They seem to be hoping that people won't remember their cyclical, abject, repeated failures to motivate their base to turn out.

Is Steve Mostyn still paying BGTX's bills, and if so ... why?

-- Donald Trump has to hold off a hard-charging Ted Cruz in the Palmetto State (just as Hillary is "trying to" do with Bernie in the Silver State).  Those apes have been throwing their feces at each other for a week now, since last Saturday night's debate.  Where Marco Ruboto and John Lobster Hands Kasich and Jeb Zombie Walker Bush finish will allegedly be a story.  Do you care?  I don't.
Posted by PDiddie at Saturday, February 20, 2016 1 comment:

Clinton and Sanders on immigration

Clinton's Latino Congressional surrogates -- Luis Gutierrez, Julian Castro, Delores Huerta -- are doing her dirty work this week in Nevada.  When I first read the accusations against Bernie, dug out of the ten-year-old archives of Senate voting records, it sounded pretty harsh.

"He really set us back, you might say, a decade by not supporting us on the immigration bill in 2007," said Huerta, a who led the United Farm Workers alongside Cesar Chavez in the 1960s. "His reputation as being a super liberal, many people followed his guide on that. That was just a devastating blow for all of us who were fighting for immigration reform and for immigrants' rights."

Gutierrez stressed the 2007 vote as well as the fact that Sanders appeared on the television show hosted by Lou Dobbs—a prominent anti-immigration hardliner. "In 2007, when there was a way forward…he stood with the Republicans and went on Lou Dobbs' program," said Gutierrez.

Sanders was one of several liberal senators who opposed the bill. Some labor unions opposed it, as well. At the time, Sanders described the bill as a threat to wages for American workers. More recently, he has justified his opposition to it by citing the bill's guest worker provisions, which have been described as exploitative. Sanders has repeatedly pointed to a Southern Poverty Law Center report that said the working conditions in those programs would be similar to slavery.

For all his rhetoric in 2007, Sanders didn’t oppose a pathway to citizenship or efforts to boost border security. That chapter in Sanders’ immigration record reflects less on his support for the issue and more on his alliance to labor — and key unions also opposed the 2007 legislation.

“Sanders was basically one of our only allies … especially for low-skilled workers” in 2007, said Ana Avendano, a former top immigration official at the AFL-CIO. “He adamantly put his foot down and said these kinds of programs [allow] employers to bring in more and more vulnerable workers.”


In fact, many immigration activists were themselves conflicted over the legislation.  To her credit, Clinton has promised to be a better advocate for immigrant families than the night-time raider Obama ... though that hasn't been her recent position.

When reporters asked about Clinton's record—and specifically about her recent support for sending immigrant children who fled violence in Central America back to their home countries—Castro repeated his belief that Clinton would be most likely to actually move forward on immigration reform if elected president. Sanders brought up this issue during the last Democratic debate and argued that the child migrants should be allowed to stay in the United States.


Are the accusations made by Clinton's surrogates similar to Bernie's calling Clinton out for her 15-year-old Iraq war vote (for which she has now apologized)?  Are these John Kerry-styled "I voted against it before I voted for it" flip-flops by both candidates?  With respect to "sending the children back", is Clinton criticizing the president, of the kind she has attacked Sanders over?

What's true and what's campaign bluster seems to be in the eye of the beholder.  Stace had a good post six months ago about this.  It seems we're still not having the right conversation about the many complicated facets of US immigration policy.

Update: If you needed additional role reversal, then Clinton is cast as the idealist and Sanders the pragmatist as a result of the exchange in last night's town hall.

When you read this, it doesn't make any sense why Hillary Clinton and all of the people who stand behind her are acting so nasty.  Is it just their nature?  Are they warming up for Trump (or Cruz, as the case may be)?  Do they think they can win in the fall without many of the Sandernistas, or will they simply bludgeon them into submission with the "SCOTUS" cudgel?

After a pretty massive defeat in the New Hampshire Democratic primary, former Secretary of State Hillary Clinton could use some good news, and she got a bunch of it on Wednesday. According to a new set of polls released by Public Policy Polling (PPP), Clinton leads Senator Bernie Sanders (I-VT) in 10 of 12 early March primary states, and in nine of those, she holds double-digit leads of anywhere from ten points (in Michigan) to 34 (in Mississippi and Georgia). Sanders leads only in his home state of Vermont and its neighbor, Massachusetts.


Meanwhile, Primo at Juanita Jean's has caught up with me.

I'd like to see some cessation of hostilities from Clintonites from here on.  Can they manage it?
Posted by PDiddie at Wednesday, February 17, 2016 6 comments: