"Time may change me,
But I can't trace time." 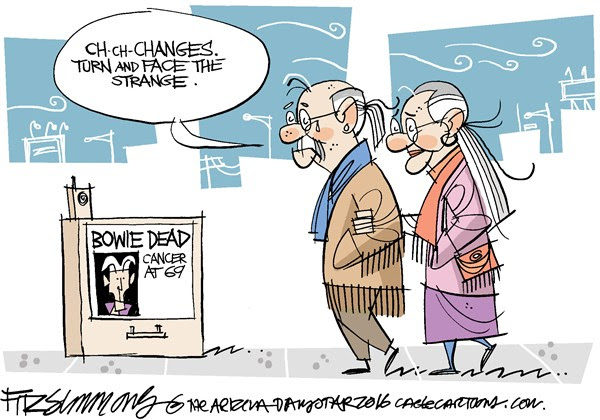 "We could be heroes,
just for one day." 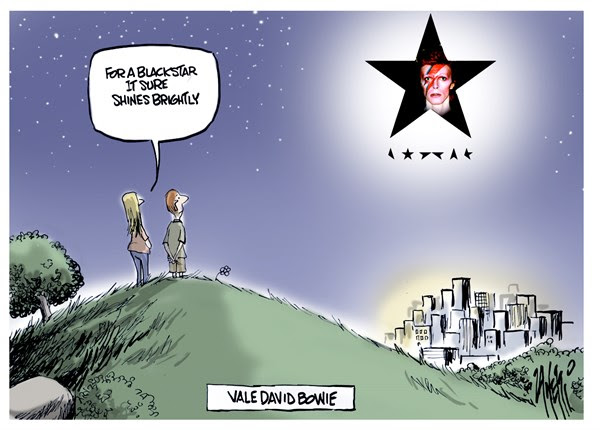 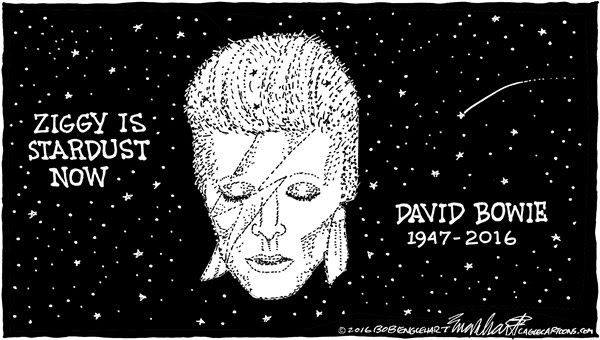 -- Obama's final State of the Union address is tonight.  He intends to burnish his legacy, as lame ducks do.  How's he done in the past seven years with respect to promises kept?

-- Fresh polling has both the Democrats and the Republicans nervous as turkeys at Thanksgiving.  Both parties' establishment caucuses are busy strategizing Plan Bs.  Here's the 'shock me' nut graf for the Blue Team:

Because of the weakness Hillary is showing in the polls, Wall Street is thinking of backing another Democrat to stop Bernie, who obviously would be their worst nightmare.  Names mentioned this morning: Biden, Kerry and Bloomberg.


I still don't think Hillary is going to be denied the nomination even if she loses both Iowa and New Hampshire, which are neck-and-neck today.  But she's definitely a frog in a pot on the stove with the burner set to 'high'.  I believe she'll  jump out of hot water when she goes after Bernie on his gun stance in this coming Sunday's debate (as I wrote at the end of this post).  But H.A. Goodman is coming to his rescue, digging out some old quotes where she describes herself as a "pro-gun churchgoer".  So it's possible that chameleon Clinton is going to have change her colors once more.

Update: ICYMI there was an Iowa forum yesterday, sponsored by Fusion for black and brown Democrats, with all three candidates participating.  Did you catch it?  Did you even know about it?  If you didn't, thank Debbie Wasserman Schultz.

-- South Carolina will be pivotal for the Repugs as well, because Ted Cruz is going to come from behind in Iowa and Donald Trump will rebound in New Hampshire.  Trump still shows a small lead in the Hawkeye State, but they caucus there and his fans are too busy to show up for him.  Cruz, on the other hand, holds the evangelicals in his hands FTW.

I am enjoying the way they snipe at each other, however.  Trump played the birther card on Cruz; it went national again with screeching on both sides of the "is he eligible" question.  Trump is now playing Springsteen's "Born in the USA" at his rallies, while Cruz responds with a Tweet of the YouTube of Fonzie jumping the shark. 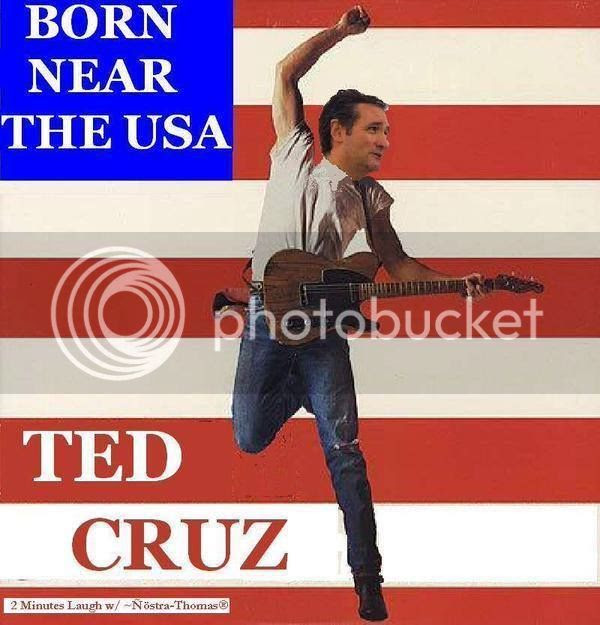 -- The next GOP debate is Thursday night and Rand Paul and Carly Fiorina both got demoted to the JV team.  And Rand won't play at the kid's table.

"An artificial designation as being in the second tier is something we can't accept," (Paul) told CNN on Monday. "I won't participate in anything that's not the first tier."

Update: Moron Majority has debate questions for the remaining participants.  A few...

Donald Trump – “Not much is known about your wife, Melania. How do you think your supporters, especially evangelicals, would react knowing that  if you were elected, she would be the first First Lady to have posed nude?”

Ted Cruz – “Why does everyone hate you? Even your old college roommate, Craig Mazin, said,“I would rather have anybody else be the president of the United States. Anyone. I would rather pick somebody from the phone book.”

Jeb Bush – “Do you regret not having listened to the words of your mother when her advice to you about running for president was: don’t?”


And Republican Talking Head John Feehery could vote for Trump because "nothing suggests he is a racist", but NOT for Cruz because he's "the new Nixon".  If that doesn't tell you how discombobulated the GOP is right now...
Posted by PDiddie at Tuesday, January 12, 2016 7 comments:

The Texas Progressive Alliance wouldn't trust Greg Abbott to write a grocery list as it brings you this week's roundup. 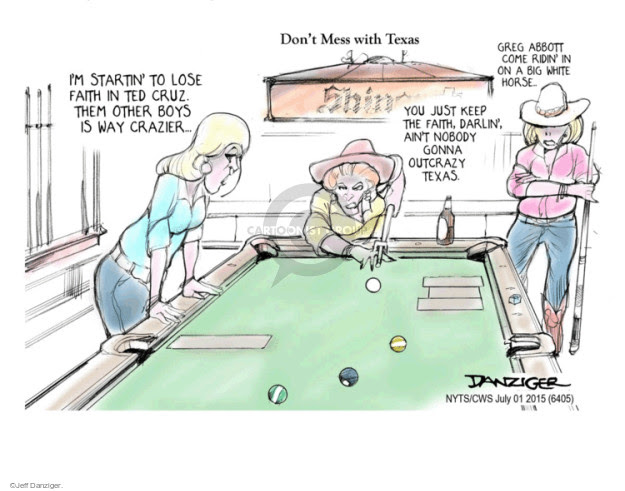 Libby Shaw, contributing to Daily Kos, has had it. The governor's call for a constitutional convention deserves the lampooning and mockery it receives. The Texas Blues: Living in a place run by drunk monkeys and petulant teenagers.

Having grown up in the West and been to that area, SocraticGadfly surveyed the details of the Oregon standoff and then -- inspired by the #BundyEroticFanFic hashtag -- took time to write some purple prose.

Dan Patrick is on a crusade to kill public education. CouldBeTrue of South Texas Chisme doesn't want the Koch brothers or any religious using our tax dollars to force the indoctrination our children.

The sudden and untimely vacancy on the Harris County Commissioners Court has been covered extensively by PDiddie at Brains and Eggs.

Ted at jobsanger is already concern-trolling progressives to vote for Hillary.  (It seems the "cascade of anxiety" has reached Amarillo.)

McBlogger takes down a CEO for exceptionally dumb remarks against raising the minimum wage.

TXsharon at Bluedaze points out the differences between Austin's gas plant and Denton's.

Consistent with what Houston is all about, Neil at All People Have Value took a picture of contrasting things in close proximity to one another. APHV is part of NeilAquino.com.

The Texas Observer's Strangest State has news you may have missed from Tahoka, Dogwood City, Marshall, Schulenburg, and Tyler.

Lone Star Ma documents some no-open-carry businesses, the Dallas Observer has some helpful etiquette tips for the open carry era, and the San Antonio Current provides a comprehensive list of Texas businesses that have said no to open carry.

The TSTA Blog is wary of new education commissioner Mike Morath, and The Lunch Tray reports that school kids today are making better lunch choices thanks to the Healthy Hunger-Free Kids Act.

The Makeshift Academic frets over labor's prospects in 2016.

Grits for Breakfast is in Missouri mode when it comes to resolving the Harris County jail's overpopulation.

Jeff Singer flies back in his time machine to 1938 to watch the Donald Trump of Texas, Pappy O'Daniel.

BOR is looking for writers.

Finally, the TPA extends its thanks and best wishes to Texas Civil Rights Project founder Jim Harrington on his retirement.
Posted by PDiddie at Monday, January 11, 2016 No comments: 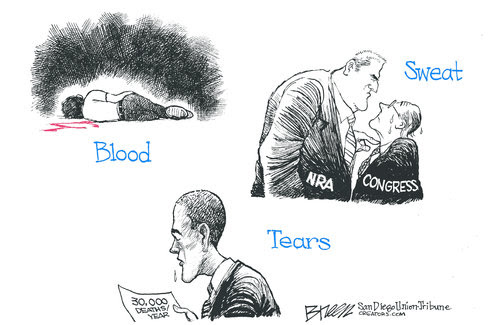 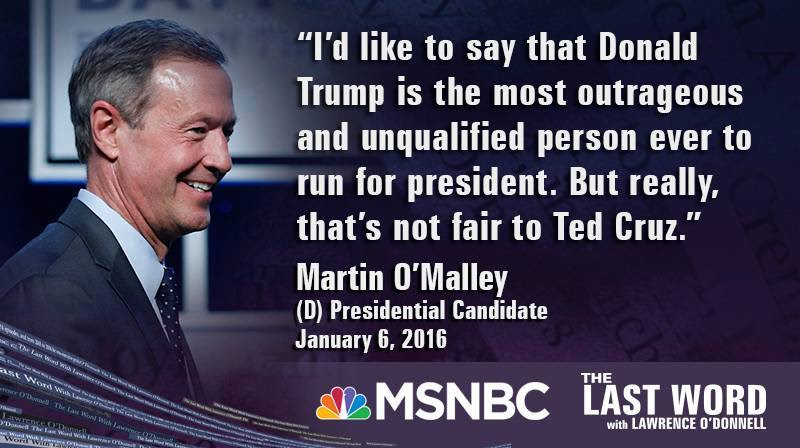 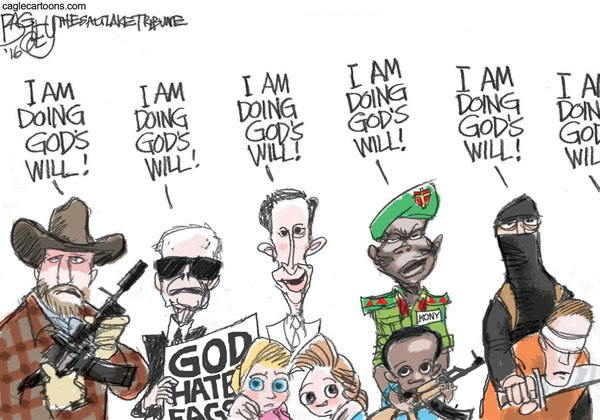 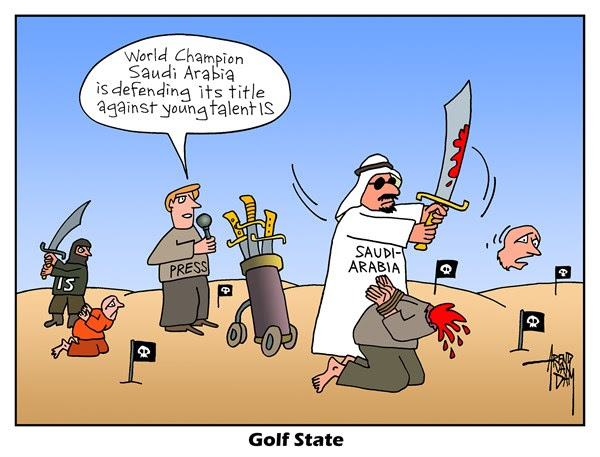