In my conference call with Barbara Radnofsky last week, she alluded to a developing scandal within the Texas Attorney General Greg Abbott's department of child support collection. Theodore Kim of the Dallas News broke the story today.

"During my tenure as attorney general, the child support division has been elevated to the No. 1 national ranking," Abbott, a Republican, said in an interview last month in his Austin office. "And it is recognized around the country as being the top child support agency anywhere in the land."

Yet the full slate of numbers provides a more varied picture.

Texas lags in the percentage of overdue support it collects, according to an analysis of federal data by The Dallas Morning News. Delinquent cases and amounts owed are rising faster here than in many other states.

And Abbott's critics, including Democratic rival Barbara Ann Radnofsky, accuse the state of chronically underreporting how much child support is owed. State officials deny the charge.

"This attorney general is very bent on making his numbers look as good as possible," Radnofsky said.

Abbott's signature issue -- he ran millions of dollars of television ads in his re-election campaign of 2006 about his success in the endeavor of 'bringing deadbeat dads to justice' -- employs 2600 people and has an annual budget of nearly $300 million.

But he cooks the books.

Abbott, above all, underscores Texas's top rating, which the federal Department of Health and Human Services determines by comparing amounts collected with collection costs. The federal government rewards high-ranking states with additional money.

In fiscal 2009, Texas took in $9.80 in child support for every dollar it spent. That was more than double the national average of $4.73, federal statistics show. California collected $2.10 per dollar spent, putting that state 48th.

Abbott credited the statistics to a streamlined corporate culture and a caring workforce.

Abbott says his numbers account for only the most challenging cases. Other states include all cases in their reports to the federal health agency, which gathers the data.

In truth, many problem-free cases are included in Texas's numbers.

Most big cities – including Dallas, Fort Worth, Houston and San Antonio – automatically add all child support cases, including ones involving willing payers, to the attorney general's database. Parents must opt out to avoid inclusion.

It gets worse, though.

Ginger Weatherspoon, who was fired from the attorney general's office in 2008, blamed the state for relying on a computer system that she says misinterprets state law and has generated widespread discrepancies.

Monica Attura, 44, of Plano has a different view. She and daughter Beatrice have received support for eight years.

But when a judge increased her ex-husband's biweekly payments from $600 to $750 earlier this year, Abbott's office began withholding payments as it verified the change.

Attura said she has not received child support for nearly two months, despite her attempts to resolve the matter. Her bills are adding up.

"It doesn't make sense to me, what is going on," said Attura, an interior designer who makes about $35,000 a year.

And apparently "liberal" definitions of what constitutes a father's income. From the comments there (typos left uncorrected):

It seems Abbott's version of the truth leaves a lot to be desired by all parties involved in the child support matter. The big finish:

She argued that the state has incorrectly calculated the amounts owed for a large number of families since a 2002 change in state law.

"All of the bragging of success depends on ignoring the failure of the attorney general to collect or even acknowledge the legal debts that noncustodial parents have had written off," Radnofsky said.

Abbott intends to challenge the comprehensive healthcare plan passed into law earlier this year; he blustered about doing the same thing regarding legislation to cap greenhouses gases (no longer under consideration in the Congress). He wades into every fundamentalist conservative issue from gay marriage to the Ten Commandments on the state Capitol grounds.

He has a big fan club of enthusiastic freaks supporters.

Greg Abbott -- and I've been writing this since 2006 -- is the most dangerous politician in Texas.

It's long past time to elect an Attorney General who is capable of representing more than the most extreme faction of the Texas Republican party.
Posted by PDiddie at Tuesday, August 03, 2010 No comments:

The Texas Progressive Alliance sends its congratulations to Chelsea Clinton and Marc Mezvinsky on the occasion of their wedding, and to Mrs. PDiddie on her 50th birthday today, as it brings you this week's blog roundup.

This week on Left of College Station Teddy reports on a Texas-size failure that finds our state's children are among the nation's most disadvantaged. Also this week: why justice is not color blind and the week in headlines.

Off the Kuff kicked off his 2010 candidate interview series by talking to three Democratic SBOE hopefuls: Michael Soto, Rebecca Bell-Metereau, and Judy Jennings.

CouldBeTrue of South Texas Chisme wonders why the Catholic church is so preoccupied with teh gay when people are going hungry and war is all around.

WhosPlayin was out on business all week, but had to update his post on the history and status of gas drilling in Lewisville, since more permits continued to be filed in light of the failed moratorium.

It's rare that anyone on the pages of McBlogger has something nice to say about Joe Lieberman. So you should take special note and check it out when it does happen.

Contrary to everything else you've been hearing, there are at least ten signs that the Republicans will get blown out in the midterm elections. And they're now playing at PDiddie's Brains and Eggs.

Liberaltexan  over at TexasKaos brings us up to date on the plight of Texas children under the Repug administration of Dear Leader Perry, and it ain't pretty. Check it out here: Texas Size Failure: Children in Texas Among the Nation's Most Disadvantaged.

Despite the recent court ruling against some aspects of the Arizona immigration law, Texans can expect that harsh immigration measures will be proposed when the legislature meets again in 2011. Neil at Texas Liberal asks if liberal and progressive forces in Texas will mobilize in advance of this attack.
Posted by PDiddie at Monday, August 02, 2010 No comments:

Two weeks ago, Goldman Sachs settled fraud allegations brought by the Securities and Exchange Commission by agreeing to pay over half a billion dollars in fines regarding their role in the meltdown of the mortgage market that triggered the financial collapse of 2008.  But they also managed to avoid the stain of a confession of fraud. Instead, GS made the extraordinary admission that it made "a mistake" by not disclosing that the securities it sold were secretly designed by Paulsen and Co. to fail; indeed, the products -- known as Abacus 2007-AC1 -- were never to make money for the purchasers.

These admissions did not relieve Goldman of all of their potential punitive burden, however. While there has been a paucity of investor lawsuits to date, the states -- on behalf of injured parties such as their pension and retirement systems for teachers and public employees -- are taking matters into their own hands.

While at least one state's attorney general has gone after a Wall Street outfit on behalf of her residents -- Martha Coakley of Massachusetts, and Morgan Stanley -- so far the attorney general of Texas, Greg Abbott, is unable to respond in similar fashion for Texans, despite the fact that the legal brief and complaint has been prepared for and delivered to him. Along with an offer on behalf of several attorneys to pursue the case for no fee.

Of course since it is his Democratic challenger, Barbara Radnofsky, who has done the legwork in this matter, Abbott must think that pretending not to notice her efforts is the best course of action ... for his re-election prospects.

But even former Texas Governor Mark White -- who also served as Texas attorney general -- called on Abbott to file suit, explaining: "Radnofsky's proposed suit versus Goldman Sachs and other Wall Street firms is greatly aided by Goldman's concessions announced (July 16). The State of Texas has suffered as a result of Wall Street negligence and fraud. And the harm to the State we love is physical as well as economic."

Sign the petition calling on Greg Abbott to go after the Wall Street crooks. Since we bailed them out with taxpayer money (which they then spent on executive bonuses), isn't this the very least he can do?
Posted by PDiddie at Sunday, August 01, 2010 No comments:

Apparently now we not only hold SOME truths to be self-evident, but also just about ANY POSITION we happen to prefer. It's pretty self-evident that Obama is not a U.S. citizen because we don't like him. It's clear that he wants to take everybody's guns away because that's what a president who isn't a real citizen would do. 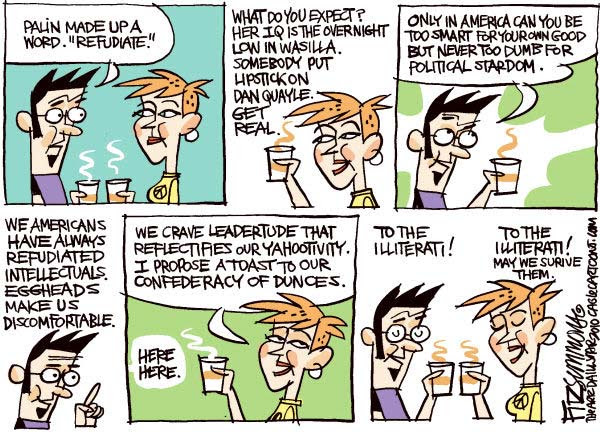 Even the most cursory examination of evidence is now too much to ask. Climate change deniers continue to send me their strange little clutch of misleading factoids and sly questions as if I had never seen that stuff before. But it's pretty clear that they have not themselves read the overwhelming case for climate change, or simply are unable to evaluate or even grasp the concept of PREPONDERANCE OF EVIDENCE.

It's not that the political spectrum drifts left or right, it's that's it is cascading into absolute fantasy. It is impossible to engage in debate with these strange fevers, because they emanate from HOT HEADS. Excuse the cold water, but all opinions are NOT created equal. -Tom Toles