The TDP wants you to cast an e-ballot for your favorite Democratic presidential candidate. They appear to be attempting to control the freeping of it -- usually a questionable endeavour -- and the Lone Star Project points out the considerable differences between the e-Primary and the recently conducted GOP straw poll.

I voted, but I really agree more with this, from my inbox (author anonymous, for now):

The Dallas Morning News correctly describes the "Democratic e-Primary" as an attempt to get in on the Presidential "sweepstakes". Indeed, this is an artifact of money-driven politics. One problem is that, if one accepts the logic of money-driven politics -- an auction instead of a primary -- we should have stopped months ago and fallen in behind ... Hillary CLINTON!

But these fools are trying desperately to deliver Texas for John EDWARDS! He is a good man, still a contender, but very poorly served in Texas by flunkies of "Politico" Martin FROST.

Of course, the party elite also want to protect incumbents like the "Craddick Democrats" and "Bush-Dogs" in and around the party by subverting primary election participation generally and creating a "bandwagon" effect within the precinct, county/district, and state conventions.

The underlying logic of all this is "that's the way we have always done it!" Actually, "always" is simply during a few recent decades of decline presided over by a self-perpetuating party establishment in Austin. Still, superficially, this is a "high-tech innovation".

So maybe the fools running this party will find a "pony" some day. But by mocking the GOP publicly while laying-up baskets for them to tip-in, the Weimar Democrats -- no offense to Colorado County intended -- have done nothing for decades but help keep a fundamentally blue state red.

Once again, caught flat-footed by the secretive staff and worn out by the Chair's usual time-wasting and diversions, nobody on the poorly-attended SDEC raised the least objection to this ridiculous move. It is not clear that it has the sanction of any national candidate authority.

I guess I am a moderate or centrist, so personally I will settle for boycott and ridicule. Hopefully, Ron PAUL will swamp the GOP "Straw Poll" event and grab the headlines.

Nonetheless, it is increasingly evident that the fools running this party are wasting Fred BARON's money and doing John EDWARDS no good at all by attempting to manipulate Democratic voters only to play into the hands of the GOP with stupid stunts.

I have a friend who is an LSO on a carrier attack group that is planning and staging a strike group deployment into the Gulf of Hormuz. (LSO: Landing Signal Officer- she directs carrier aircraft while landing) She told me we are going to attack Iran. She said that all the Air Operation Planning and Asset Tasking are finished. That means that all the targets have been chosen, prioritized, and tasked to specific aircraft, bases, carriers, missile cruisers and so forth.

I asked her why she is telling me this.

Her answer was really amazing.

Try not to let this ruin your weekend.

Update (9/4): The diary linked above has -- according to one of the site's administrators -- been taken down by the author. (You can read an expanded, yet still incomplete, excerpt here.) This development appeared to follow some ridicule by a right wing blog, and some upbraiding by the Great Orange Satan himself.

It is to laugh. Heartily.

As we eagerly await announcement of the straw poll results, the delegates are watching a video tribute to Ronald Reagan. It started with Dick Cheney talking about the former president, but before he said a word, boos erupted at the mere sight of the vice president. Then, other Republicans starting cheering to drown them out. And then, of course, the boos got louder, and one particularly boom-voiced Republican shouted: "National shame!"

With two police escorts on bicycles, Ron Paul's supporters finished their march to the Convention Center and are now rallying outside the delegates' entrance. Several buses and RVs passed by covered in Ron Paul signs.

According to one of our correspondents, a live monkey could clearly be seen in the window of one of the Ron Paul RVs.

I just peed a little from laughing so hard.

IVR Polls has a better snapshot of who Texas Republicans favor, and it likewise appears to be the almost-about-to-declare elderly actor. The math of the timing of his announcement is most revealing.

Here's a video of Ron Paul's supporters being turned away from the Fort Worth convention center, where the poll was being conducted:

And just to put the last loony cherry on top, apparently Cindy Sheehan is a Ron Paul supporter.
Posted by PDiddie at Sunday, September 02, 2007 No comments: 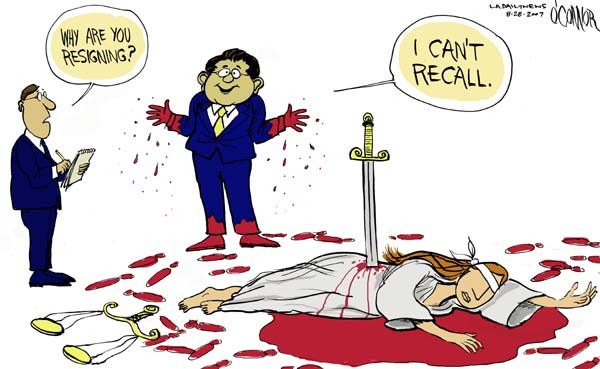 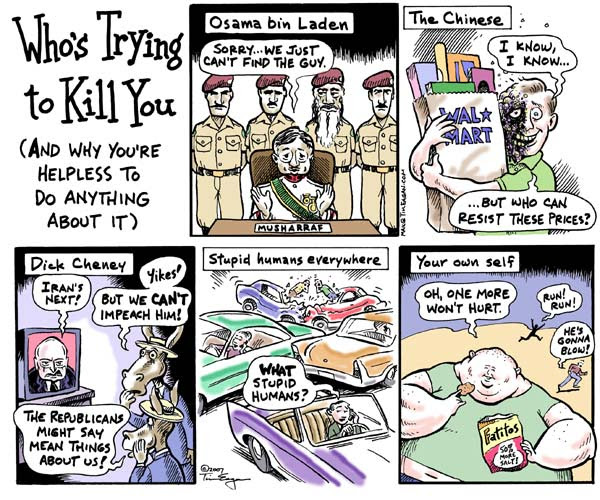