The Texas Progressive Alliance celebrated the imminent announcement of Bernie Sanders' presidential campaign -- and that of several Texans who are in for 2020 in downballot contests -- with Our Revolution Texas, Jim Hightower, Nina Turner, Sema Hernandez, Steve Brown, and about a hundred others at Saint Arnold's Brewery last Saturday evening. 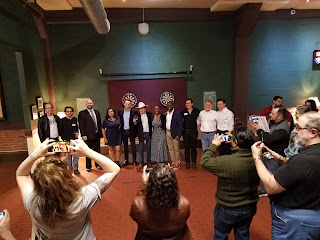 Off the Kuff blogs about some of those not named Beto considering a Senate bid next year.  Down With Tyranny did him several points better, mentioning Sema (even as he discounted her prospects).  Not even the mighty TexTrib has managed to notice her campaign yet.

Wendy Davis lost her bid for Texas Governor in 2014.

Yet both aren’t closing the door to a U. S. Senate campaign.

It’s very strange to not mention @_SemaHernandez_, someone who has announced that she is running for U.S. Senate. https://t.co/3PuGos7dUM
— Samuel Ulises Carrillo (@samuelucarrillo) February 17, 2019

DWT also anticipates that Texas -- like California in 2018 -- could elect seven new Democratic Congresscritters in 2020 (although that strikes this blogger as extremely wishful thinking, especially if they're more like Henry Cuellar and less like Mike Siegel).

Texans for Public Justice points to the TexTrib's piece about Dennis Bonnen's huge cash haul right after he clinched the race for Speaker.

“The Austin lobby, by and large, gives for influence and access, it doesn’t give due to ideological affinities,” said Mark Jones, a Rice University political scientist. “When it was clear that Dennis Bonnen would become speaker, Dennis Bonnen became one of the three most powerful politicians in Texas and therefore someone that every lobbyist — from the left to the right, from clean energy to oil and coal, from beer distributors to craft breweries — everyone wants to be on his good side.”

The second highest donor was Charles Butt, chief executive officer of the H-E-B supermarket chain, and a billionaire who has poured money into the fight against taxpayer-funded voucher-like programs, a priority issue for top Republicans last session.


Better Texas Blog calls the signature bills in the Lege to cap property tax revenues the "wrong approach" to the issue.

Ty Clevenger's Lawflog details his lawsuit regarding Sen. John Whitmire's quashing of a DPS investigation regarding a female state trooper that the senator was having an affair with.

In this week's criminal justice news, the latest developments in the Houston drug bust that took the lives of four police officers and two suspected drug dealers prompt Grits for Breakfast to explain why we know so little about the bad cops on some *cough* HPD *cough* police forces.  Progrexas writes about the Lege's evolving views on state jails.

In the run-up to the 2019 legislative session, the leaders of both the House and the Senate asked committees to study the state jail system, which holds around 21,500 inmates in 17 jails, according to the House Committee on Corrections. That led to a report from the House Committee on Criminal Jurisprudence that referred to the system as a “complete failure,” and lawmakers in both chambers listed bolstering local pretrial and probation initiatives as a top priority.

In its 2020-21 funding request, the Texas Department of Criminal Justice asked for $8 million in addition to its base budget to expand pretrial services offered in counties across the state. Pretrial programs divert defendants from traditional criminal justice processing and provide rehabilitative substance abuse and mental health treatment to offenders. Advocates say such rehabilitative treatment is missing from state jails today and is largely to blame for the problems in the system.


And Harris County commissioners denied the request for additional prosecutorial staff for DA Kim Ogg, a surprising rebuke from her fellow Democrats on commissioners court.

The rejection appeared even more pointed a little later when the court voted to nearly double the budget for the county public defender’s office, the most significant investment in that office’s nine-year history.

It also came less than 24 hours after a former assistant district attorney filed paperwork to challenge Ogg in next year’s primary, a sign criminal justice reformers may have lost patience with the self-described progressive after helping elect her in 2016.


SocraticGadfly looks at the dustup between AIPAC and Rep. Ilhan Omar and says she shouldn't have apologized.  Pages of Victory had similar thoughts.

Steve Russell at The Rag Blog pleads mea culpa on three of Trump's appointees he thought would be something less than horrible.

Juan Cole blogs about Trump's proposed wall at the southern border as an ugly scar across a thriving zone of biological diversity.  Gus Bova at The Texas Observer has the latest on the National Butterfly Center's lawsuit seeking a restraining order on construction of the wall through its property.

Fourteen Texas counties have groundwater that is contaminated by coal ash dumps.  Texas Vox passes along the link to the Environmental Integrity Project's recent report. 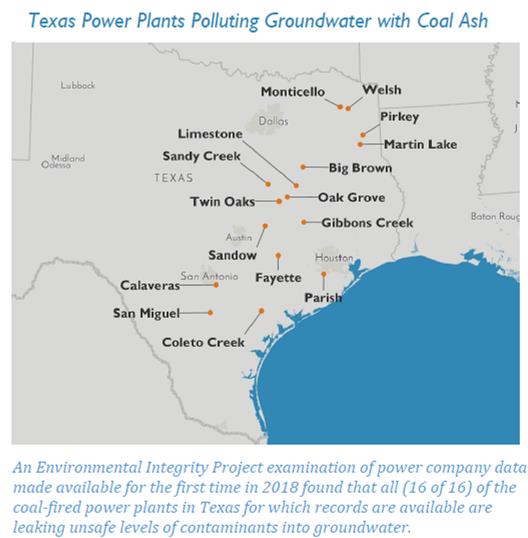 Texas Freedom Network sees the push for Bible courses in public schools getting a White House endorsement despite some very serious problems.

Somervell County Salon wonders how what Google did in Midlothian could be considered transparent.  Backstory:


To win a $10 million tax break from a small Texas city, Google quietly set up a shell entity called "Sharka," forced city officials to conceal from the public that Google was behind it, & didn't come clean until after the tax breaks were locked in.https://t.co/lJjeYOWRs7
— Avi Asher-Schapiro (@AASchapiro) February 15, 2019


Therese Odell talks about her personal connection to gun violence in America.

Paradise in Hell provides some other national "emergencies" for Trump to deal with.

And Harry Hamid declares that quitting smoking and drinking has nearly killed him.
Posted by PDiddie at Monday, February 18, 2019