Congratulations to Lizzie Pannill Fletcher for the big break.

The arraignment of US Rep. Christopher Collins yesterday in federal court for violating the laws regarding insider trading is bad news for Trump, but five other Republican Congressmen, including  Texans John Culberson and Michael Conaway, are also caught in the undertow.

Via Raw Story, which counts them as six but that number includes Tom Price, who has cycled through the swamp faster than anyone, from Georgia Congresscritter to HHS Secretary to out on his ass cushy healthcare industry board job, i.e. lobbyist.  Raw Story's reporter also apparently didn't realize that the Houston Chronicle piece they mentioned but did not link regarding John 'Keeps His Word' first appeared in June of 2017 (it referenced Culberson's opponent only as a "research physician", aka Dr. Jason Westin).  Excerpt from the Chron: 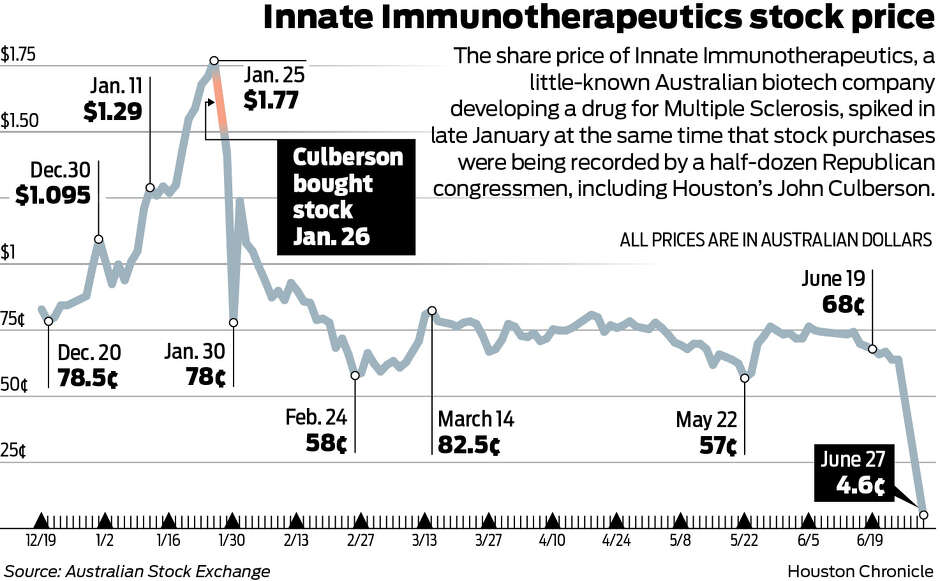 Culberson says his interest in Innate was sparked by "press reports," though he has declined to specify which ones. News reports in January -- just before he and Conaway bought Innate stock -- focused on the controversy surrounding the purchase of shares at discounted prices by Collins and then-Georgia U.S. Rep. Tom Price, now (formerly) the secretary of health and human services.

An article in the New York Times in early January, two weeks before Culberson bought his stock, hardly inspired confidence. It described Innate as "a tiny pharmaceutical company from Australia that has no approved drugs and no backing from flashy venture capital firms." The piece also noted that the company had run out of money "more than once" and nearly folded.

On Capitol Hill, the focus was on Collins, who was being accused by Democrats of promoting Innate stock to colleagues in the halls of Congress. Collins has repeatedly denied the charge.

Earlier this month The Hill, a Capitol Hill newspaper, published an "exclusive" report citing a half-dozen Republican lawmakers -- all speaking anonymously -- who said they heard Collins "talking up" Innate at various congressional gatherings.

Again, Collins denied it, telling The Hill, "I've never encouraged anyone to buy the stock. Ever."

A number of ethics watchdog groups and legal analysts say that if Culberson and other lawmakers were steered into their Innate investments with non-public information, they could be in potential violation of the Stock Act, which bans insider trading by members of Congress - whether or not they make money.

Culberson has declined repeated requests from the Chronicle to talk about the details of his Innate stock purchase, including whether he was still holding on to the stock Tuesday when its price plummeted. He has relied instead on a written statement that his investment was motivated by the death of a family friend from multiple sclerosis. He also acknowledged in a statement that he "rarely" buys or sells stock.

That admission has deepened interest in his decision to buy stock in Innate, a struggling biotech company that generally has been trading for less than $1 on the Australian Stock Exchange.


So Big Bad John has some 'splain' to do, and whether he does it to federal prosecutors or the Congressional ethics committee or the media or the voters of the 7th Congressional District ... well, we'll just have to wait a little longer and see.

At least one of the lawmakers, John Culberson of Texas, reported selling his holdings a few weeks before the company was privately informed in June 2017 of negative results from a clinical drug trial. When the news was announced, the company’s share price tanked. He said in a statement Wednesday that he didn’t have any inside information when he sold.


As for Conaway, the 11th District of Texas is a pretty safe one.  A quiet backbencher for most of his seven terms, Conaway took over in April from Devin Nunes (who you might have seen and heard on the news just last night) the Congressional 'investigation' into Russian interference in the 2016 campaign, which includes collusion as well as election-related meddling.  Prior to that, he would have been in charge of investigating Collins, Culberson, and himself on these stock trades, as he was the House Ethics Committee chair.  And his Democratic challenger, Jennie Lou Leeder, while seemingly a good progressive -- the words 'single-payer' show up in the first sentence on her healthcare issues page -- is still, sadly, a long way from getting some traction.

But Ms. Fletcher and all the centrist Democrats in the Seventh ought to be waking up this morning feeling elated at their good luck and the fortuitous timing of these developments.
Posted by PDiddie at Thursday, August 09, 2018