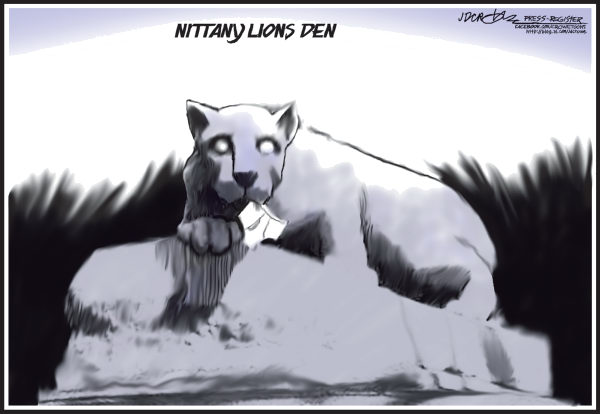 A crowd of Penn State students in school sweatshirts huddled together near an old university building to listen to a call for unity, healing and peace. They wiped away tears, rested their heads on friends' shoulders and reflected on a week that stained the place many of them see as a second home.

"We are what makes the university thrive," said T.J. Bard, student body president, the day after his peers rioted in the streets to defend the firing of coach Joe Paterno. "And we are the ones who must restore glory to Penn State."

Why them? What happened on their campus wasn't their fault. Most didn't even know Joe Paterno, Jerry Sandusky and Matt McQueary. Usually in society, when something as horrific as child molestation happens, people around the alleged perpetrators cut all ties. They reject. So why not protest Sandusky preying upon children instead of rioting against the board for firing a football coach? Why not feel satisfaction in the punishment of an old guard that collectively made serious leadership errors, rather than oppose the rightful dissolution of a system that protected evil?

"If they were completely objective, they would say, 'These people did something terrible and I can't support them, I cannot be in their corner.'" says Dr. Don Forsyth, a psychology professor specializing in group dynamics at the University of Richmond. "But they aren't objective."

I've been amused by this oddity of "We won", "we're going to the championship game", "we are the champions" for a long, long time. The (fairly recent ) phenomenon of wearing jerseys to the game -- or to the bar to watch the game on teevee -- feeds into the ego-stroke.

Social psychologists use two terms: BIRGing and CORFing -- Basking in Reflected Glory and Cutting off Reflected Failure. In the first, fans of a football team, for example, want to identify with the players' success. Decked out in team gear, they'll say, "We had a great win. We were awesome," when in reality the fans had no part in the win. Cutting off Reflected Failure happens when a team makes a mistake or loses, and fans blame it on an external factor to distance themselves from the defeat. "The refs were biased. The weather's bad." The true blame doesn't lie with the team.

"This is clearly a case of collective identity," says Dr. Forsyth of the Penn State reaction. "Students leave home, leave their family and they want to identify with their school. Their school has always been a place of tradition and honor, and that has been tarnished. So when they lose that identity, they panic."

And the cognitive dissonance gets worse.

Many students see JoePa as a victim, and their strong identity with him means they feel like victims, too. So they blame the media or the legal system. Is it a coincidence that the only real material damage from the riots was an overturned TV news truck? Respected ESPN reporter Tom Farrey said he was hit by a rock.

Most of us can't truly relate to the most important part of this story; the part that really has nothing to do with football. The part with the kids whose lives have never and will never be the same after such abuse from adults they were supposed to be able to trust. The part with the parents who couldn't save their children from sexual predators. But when you're 18 or 19 years old in State College, football is what you see everywhere around you and abuse (and the victims' faces) are hidden.

"Football runs the social life, it's all about football," Forsyth says. "It's the major source of everything that happens there.

"The actual crimes are very distant from them."

That atmosphere, thankfully, did change fairly quickly ... by gametime Saturday.

Student leaders came together to support victims of sexual abuse by wearing blue ribbons to Saturday's game and selling T-shirts to raise money for the Pennsylvania Chapter of the Prevent Child Abuse America Organization. PSU and Nebraska students joined in prayer before the game.

Not fast enough for some, though. The judge who ordered Jerry Sandusky released on unsecured bail turns out to be a volunteer in the Second Mile charity. And here's where the conversation pivots to politics.

I’m 31, an Iraq war veteran, a Penn State graduate, a Catholic, a native of State College, acquaintance of Jerry Sandusky’s, and a product of his Second Mile foundation.

And I have fully lost faith in the leadership of my parents’ generation.

That's a handful of institutions that have failed his generation right there.

Think of the world our parents’ generation inherited. They inherited a country of boundless economic prosperity and the highest admiration overseas, produced by the hands of their mothers and fathers. They were safe. For most, they were endowed opportunities to succeed, to prosper, and build on their parents’ work.

For those of us in our 20s and early 30s, this is not the world we are inheriting.

We looked to Washington to lead us after September 11th. I remember telling my college roommates, in a spate of emotion, that I was thinking of enlisting in the military in the days after the attacks. I expected legions of us -- at the orders of our leader -- to do the same. But nobody asked us. Instead we were told to go shopping.

The times following September 11th called for leadership, not reckless, gluttonous tax cuts. But our leaders then, as now, seemed more concerned with flattery. Then -House Majority Leader and now-convicted felon Tom Delay told us, “nothing is more important in the face of a war than cutting taxes.” Not exactly Churchillian stuff.

Those of us who did enlist were ordered into Iraq on the promise of being “greeted as liberators,” in the words of our then-vice president. Several thousand of us are dead from that false promise.

We looked for leadership from our churches, and were told to fight not poverty or injustice, but gay marriage. In the Catholic Church, we were told to blame the media, not the abusive priests, not the bishops, not the Vatican, for making us feel that our church has failed us in its sex abuse scandal and cover-up.

Our parents’ generation has balked at the tough decisions required to preserve our country’s sacred entitlements, leaving us to clean up the mess. They let the infrastructure built with their fathers’ hands crumble like a stale cookie. They downgraded our nation’s credit rating. They seem content to hand us a debt exceeding the size of our entire economy, rather than brave a fight against the fortunate and entrenched interests on K Street and Wall Street.

Now we are asking for jobs and are being told we aren’t good enough, to the tune of 3.3 million unemployed workers between the ages of 25 and 34.

This failure of a generation is as true in the halls of Congress as it is at Penn State.

With the 60 Minutes report last night that Your Congress has been trading stocks on insider information (which is illegal everywhere else in the country) you can only arrive at one conclusion: it's time to clean house.

And with the police crackdowns on Occupy encampments in Portland and Oakland last night and this morning, is there anybody still wondering what that is all about?

That would have been last week, of course. Next chance comes next year.
Posted by PDiddie at Monday, November 14, 2011

This is one of the most "on the mark" blogs that I've found.... about this whole sickening Penn State environment.

Cleaning house ... would be just the first step....

You really nailed it on this. One of your best. I'm sharing it on my site and facebook. Well done sir, well done.

Did you hear that Sandusky interview last night with Bob Costas? He's like the Rick Perry of pedophiles.